Intel's Alder Lake-S series of desktop processors are due to launch later this year, finally moving Intel to 10nm in the desktop space while bringing forward two new CPU architecture to the forefront of the company's product stack. Not only will Intel deliver their first hybrid desktop processor, but they are also due to be the first desktop CPU manufacturer to deliver a DDR5 compatible x86 processor.

On the CapFrameX benchmarking database, as first reported by Computerbase, an unknown Intel 12th Generation desktop processor has been shown running with 4.8GHz DDR5 memory. The test shows the processor playing DOTA 2 with an Nvidia RTX 3080 graphics card with a core frequency of 2.2GHz.

The performance data from this benchmark run is mostly useless, as we do not know the settings used to test the processor or what scene within DOTA 2 was used to benchmark the CPU. Based on the raw data from the benchmark, the game appears to be running at a semi-locked 120 FPS with lots of frametime variation (as the game's average FPS/frametime line is a horizontal chart with no gradient). 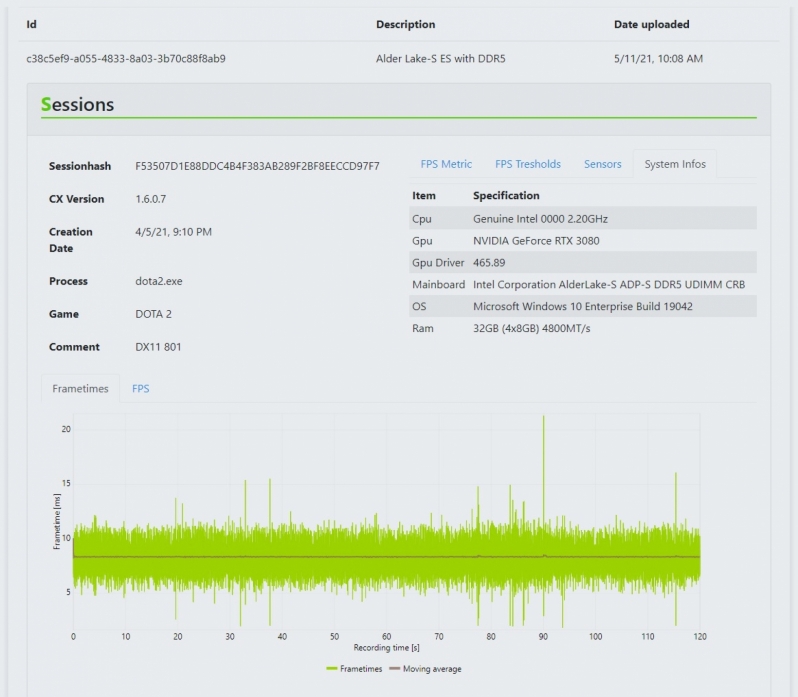 You can join the discussion on Alder Lake-S running with 4800MHz DDR5 memory on the OC3D Forums.

To point this out, CapFrameX does not upload any benchmarks results or data automatically. The user must actively do this! https://t.co/R1LZzRFzT5

Dicehunter
So X570 and Z590 are pretty much officially the last DDR4 boards before we move to DDR5, Will be interesting to see what type of speeds we get to with DDR5.Quote
Reply