While this will be seen as a positive move for Intel's customers, for Intel, this move signals difficulties in the company's future data center prospects. As it stands, Intel still sees the effects of its 14nm silicon shortage, and right now Intel can sell practically every processor it produces. Given this situation, why would Intel decrease its prices? The answer is AMD's EPYC series.

AMD has built its EPYC brand on offering customers better value, and with this in mind, it is clear to see why Intel is reducing its prices. Right now, Intel is competing with AMD's 7nm multi-die processors with 14nm monolithic chips, factors which will make price reductions a difficult pill to swallow for Intel. Even so, Intel feels that they need to make this move to "reinforce [their] data center leadership by providing greater performance and performance-per-dollar choices for customers".

The problem with AMD's EPYC processor lineup is volume, and that problem will be lessened as manufacturers like Apple, Huawei and others move to TSMC's newer process nodes, such as 5nm. Combine this with TSMC's boosts to manufacturing capacity, and AMD should be able to boost its EPYC processor production significantly.

While this move is great news for those who want better pricing for Intel's Xeon processors, it is hard to see this move as a win for Intel. You don't increase your price/performance ratios by up to 42% unless you need to. Remember that these are still 2nd Generation Xeon Scalable processors. These price cuts do not come from new silicon design techniques or other cost savings. Intel is giving customers more because they feel they need to. 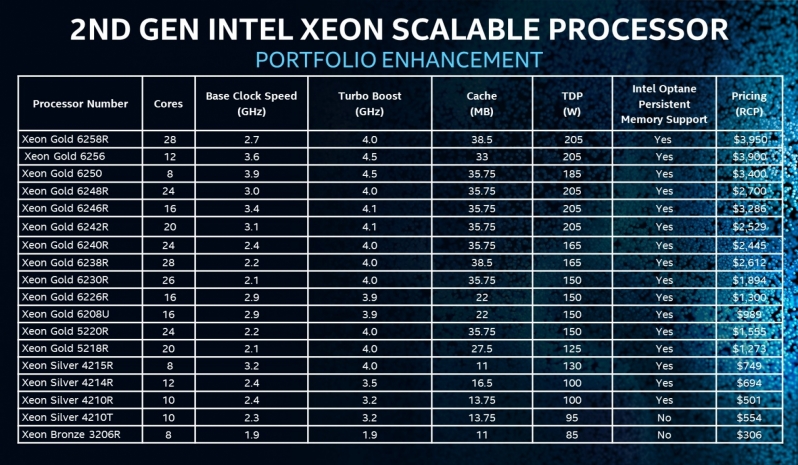 Officially speaking, Intel isn't cutting their prices. These are new SKUs, and Intel has not lowered the pricing of their existing CPU models, at least on paper. If Intel's marketing is to be believed, this is a huge act of generosity; but under the surface, it's clear that Intel is scared of AMD's current and future enterprise offerings.

Intel holds a dominant position within the CPU market today, but how often do you see market leaders offering customers 42% increases in performance/$ unless they thought that market position was in jeopardy. These price cuts will come at the cost of Intel's margins, and this will take its tole on Intel as a whole. This is what Intel needed to do to respond to AMD.

Intel's new Xeon Scalable processors are available starting today from OEMs and ODMs, which means that customers should be able to get access to these processors very soon. 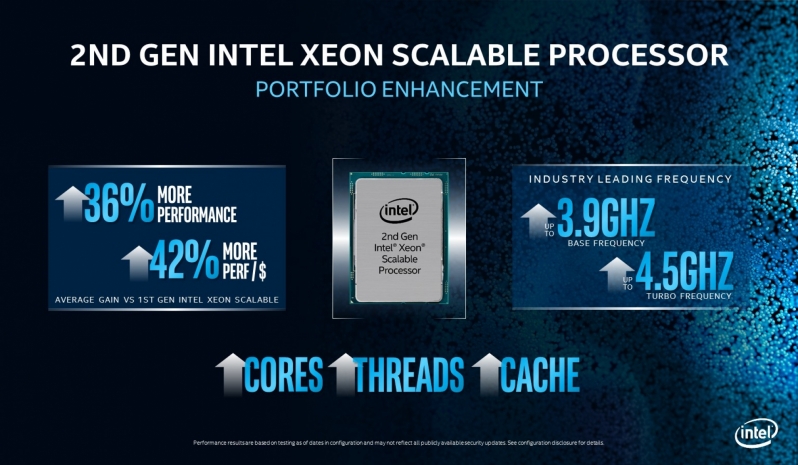 Intel's latest Xeon processors offer customers a lot more value than before, but this move clearly shows that Intel is worried about AMD's EPYC processor lineup. Even so, giving customers more value cannot be seen as a bad move for anyone outside of Intel. Yes, Intel's profit margins will be hit hard, but Intel sees this as a price worth paying to steer customers away from AMD's EPYC processors. It will be interesting to see what the server market looks like after a few more quarters of competition.

You can join the discussion on Intel's unofficial Xeon price cuts on the OC3D Forums.

RobM
LOL
They need do to more than thatQuote

ImprovizoR
Quote:
That's not all. You also get all the surprise security vulnerabilities for years to come! You won't get a deal like that anywhere else. Because Intel cares.Quote