Intel has just enhanced their 13th generation Core CPU product line with new 65W mainstream and 35W low-power (T-series) CPU models. This has added new i9, i7, i5, and i3 series CPUs to Intel's 13th generation product line, all of which support both DDR4 and DDR5 memory. 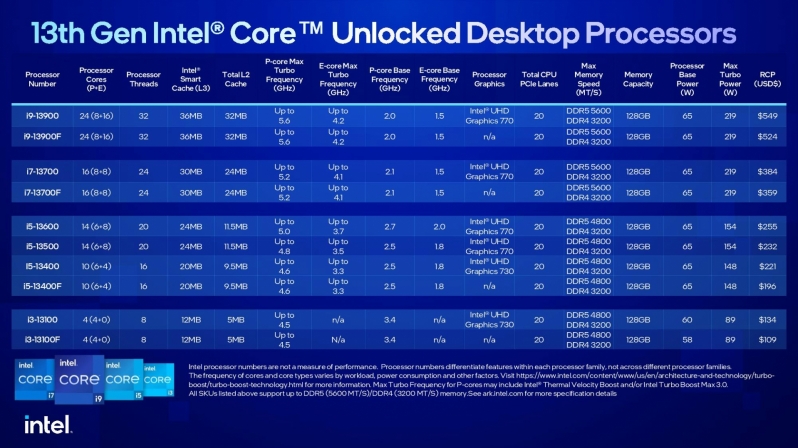 Are Intel's non-K i5 processors Alder Lake in disguise?

If you look at Intel's i5-13600, i5-13500, and i5-13400 models, you will see that they all feature much less L3 Cache then their i7 and i9 counterparts. It looks like these CPU models feature less L2 cache per P-core and less L2 cache per E-core cluster, making these CPUs look a lot more like Alder Lake CPUs than Raptor Lake CPUs.

For those who want processors that are a little less power-hungry, Intel has launched new 13th generation T-series processors that feature a based TDP of 35 watts and maximum turbo power levels that are significantly lower than their standard 13th generation CPU SKUs. These CPUs are great for compact systems, or PCs where minimal power draw is attractive. These CPUs have low cooling requirements and low power requirements, allowing them to be used with smaller cooling solutions and smaller power supplies, making these models great for low-cost, low-power systems. 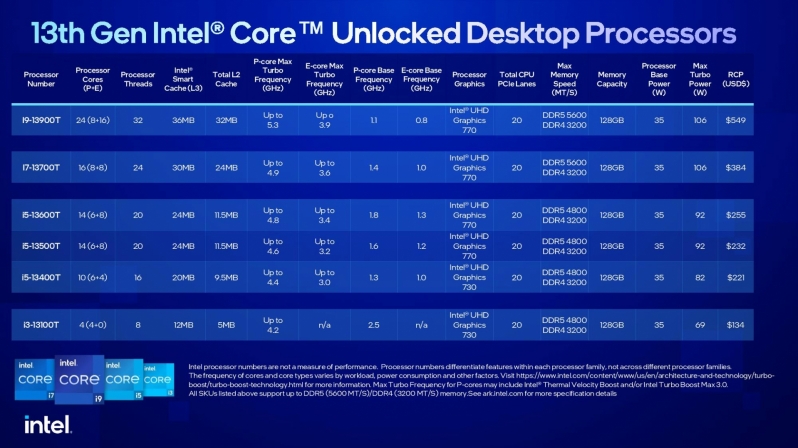 For PC builders wo want a sub-£250 CPU, Intel's latest i5 offering appear to be solid purchases. Six P-cores and up to eight E-cores is a compelling proposition, offering owners a solid mix of single-threaded performance and multi-threaded performance to put AMD's 6-core Ryzen 5 7600X in its place.

If AMD does not respond with lower prices for its Ryzen 5 class processors, it looks like Intel has successfully won the mid-range CPU market.

You can join the discussion on Intel's new 13th generation processors on the OC3D Forums.