Raptor Lake should be a strong gaming architecture from Intel

Images from an Intel event have showcased the company's claimed gaming leadership with their Raptor Lake CPU architecture, showcasing what appears to be 11% performance advantages in gaming workloads over AMD's Zen 4 architecture. Specifically, the example below is comparing Intel's i9-13900K to AMD's Ryzen 9 7950X, with AMD showcasing gaming performance that is between 22% better than 1% worse than AMD's new flagship CPU.

For many PC enthusiasts, gaming is a critical workload, and an area where AMD has been pushing for performance leadership for a number of years. With Raptor Lake, Intel wants to cement itself as the top producer of gaming processors, delivering stronger performance than AMD's latest Ryzen offerings while offering gamers more affordable motherboards and support for more affordable DDR4 memory.

With Raptor Lake, Intel wants to be seen as the company that is giving leadership performance and leadership value, a perception that will hit AMD hard. 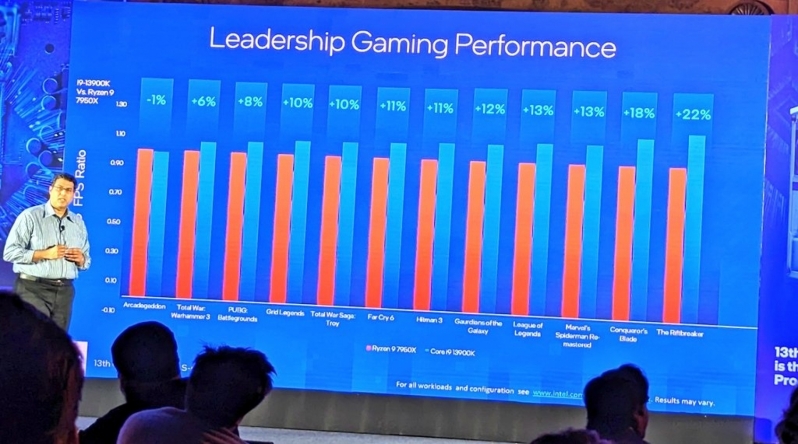 In content creation, Intel's i9-13900K processor does not offer the same leadership performance as in gaming. Here, Intel offers users performance that is widely "on par" with AMD, though Intel does have notable performance advantage in some areas, with AutoCAD being a primary example.

While Intel is not claiming performance leadership, they are on par with their competition. If Intel prices their CPUs right, this will give them a strong advantage over AMD, as performance per dollar leadership is important. 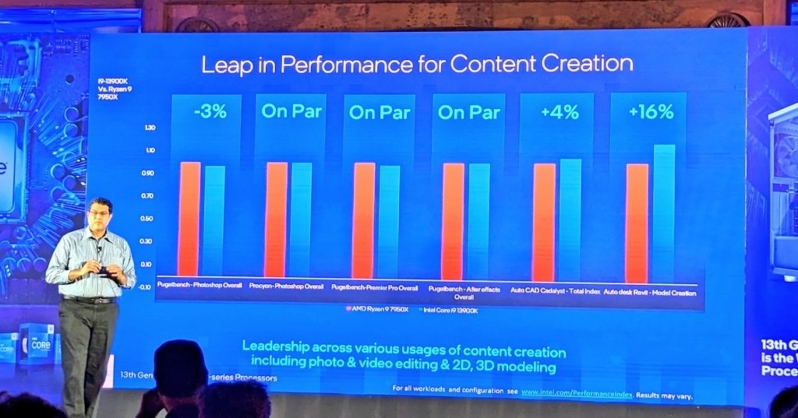 If these slides are correct, Raptor Lake will be a strong product launch for Intel, but not a strong enough launch to kick AMD's Ryzen 7000 series to the floor. Competition is hot within today's CPU market, and that is great news for consumers. Let's hope that competition continues to heat up, and that platform pricing continues to improve.

You can join the discussion on Intel's claimed gaming superiority over AMD on the OC3D Forums.

looz
Quote:
Short boosts is the way for best gaming performance, no way around that. And also many other workloads like photo editing, heck, even flicking through web pages and spreadsheets.
Obviously modern CPUs are quite overkill for most of that, but still.Quote

AlienALX
The 13900k shares the same story as all of the AMD 7000 series. IE - make it mad and it will get very hot and use a lot of power. You need to treat it the same way as all of AMD's new CPUs. And that is by looking at how it performs how it should have been released.

I can't remember which review I skim watched today, might have been a GN. And they were saying how these CPUs are no longer being released in a state in which you should use them, simply to show up on charts.

Now BITD a CPU would be released well under that state, and well, that is how overclocking was invented and became a thing. These days? the MFGrs are so desperate to outdo each other in charts they clock the crap out of them themselves, leaving 0 headroom.

If you put a 7000 series where it ought to be? they are very efficient indeed. They bloody well should be on that node. Sadly AMD deem it necessary to make them look ugly by clocking balls out of them. Just to be on a chart. Power efficiency is now no longer cared about, so long as you look good on a gaming chart.

I just watched another video on YT titled "Don't bother overclocking a 13600k". Which says it all, IMO.Quote

looz
CPU vendors going way beyond diminishing returns with power consumption is rather ironic, when it's not long ago mobo vendors got scolded over multi core enhancement.Quote

Deceit
I have a 5950x at the moment and I was waiting until both the 7950x and 13900k were released to pick one. I was worried about the 7950x pumping out so much heat as the 5950x is already on the limit of what I would want heat wise but when I seen the 13900k it was an obvious choice. I will just put the 7950x into the 105 watt mode to hopefully be similar to the 5950x in terms of heat pumped into my small office.Quote
Reply