Intel needs an answer to Zen 2, and that answer is to go BIG!

Intel needs an answer to AMD's Zen 2 series of processors, a product which will enable them to combat the coming onslaught of Ryzen 3rd Generation processors. Today, Intel's consumer chipset offers users up to eight cores, whereas AM4 is set to support up to 16-core processors, moving Intel out of its top spot in the CPU market.

10nm isn't ready yet, at least not for desktop processors. Right now, Intel is focusing its 10nm efforts on mobile platforms, a market segment where AMD has no 7nm offerings, securing Intel the high-end mobile marketplace while leaving their desktop and server divisions to make do with their refined 14nm manufacturing. This limits Intel's options in the desktop space, but newly leaked specifications are hinting at plans to release a new desktop socket with larger processors than ever before.

Later this year, or in early 2020, Intel is expected to release Comet Lake, a new series of 14nm processors which are designed to utilise a new socket called LGA 1159. Looking at the specifications below, Intel is taking a leaf out of AMD's Ryzen handbook and plans to offer hyperthreading on all of their new CPU models, as well as official support for DDR4 3200MHz memory on i5 or higher SKUs.

On the high-end Comet Lake is set to deliver users up to 10 cores and 20 threads with boost clock speeds of up to 5.2GHz. At this time Comet Lake is thought to offer the same CPU core design as Coffee Lake, but offer more cores at the cost of the component's iGPU, leaving the company's 10-core offerings as a CPU-only product. 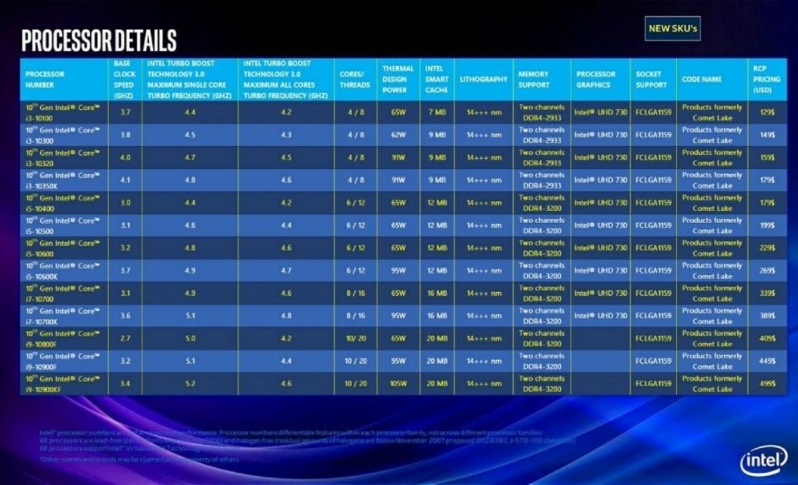 If these rumoured specifications are correct, Intel has taken their Coffee Lake series of processors to a new level with more cores and higher clock speeds. The addition of SMT to the entire lineup also removes the artificial segmentation that Intel has given over the past decade by leaving Hyperthreading as an exclusive to the company's highest-end CPU models.

You can join the discussion on Intel's Comet Lake series CPU specifications leak on the OC3D Forums.

grec
The naming scheme is grim if that's true, all those digits are a bit extreme now. If anyones wondering how much space they'd save from dropping the iGPU though, here's an annotated die shot of a Coffee Lake 8 core, easily enough for 2 extra cores and almost 4(Though there's probably power & heat headroom reasons for them not wanting to go to 12 cores on a mainstream platform on 14nm):

dazbobaby
And each chip will cost at least £1000, and that's for the base model.

Dawelio
Quote:
Is it just me or isn’t SMT an AMD thing? And Intel using Hyper-Threading?...Quote

grec
Hyper-Threading is a brand/marketing name for SMT(Well, Intel's implementation of SMT). SMT itself is a concept that dates back to the 60's.Quote

demonking
Have they fixed the security flaws?
Nope otherwise we would be seeing marketing about how they have completely redesigned HT for you!
which is nothing short of what they need to do to fix these. but lets just sweep zombieloader's under the carpet shall we....Quote
Reply