Intel has a 6 GHz processor on the horizon

At the company's Tech Tour event in Israel, Intel has revealed their they have plans to release a Raptor Lake processor that can deliver 6 GHz clock speeds. Intel has claimed that they have created the world's "1st 6GHz" processor, and have also revealed that overclockers have already pushed Raptor Lake to 8GHz. 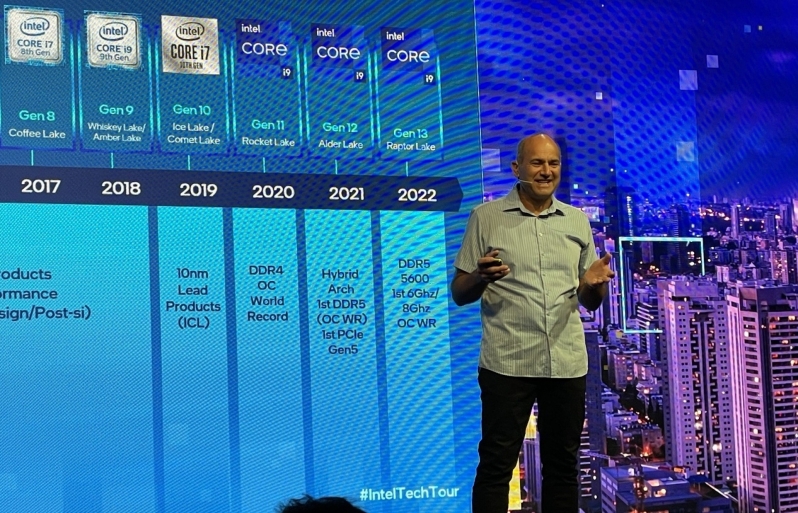 You can join the discussion on Intel's plans to launch a 6GHz Raptor Lake processor on the OC3D Forums.

Avet
AMD did exactly that when their CPUs boosted lower than advertised. And they got away with it. Why not learn from the competition? More important is that it looks like the new CPUs will perform really well no matter the camp. What they're saying in the marketing material is rarely important.Quote

g0ggles1994
Quote:
Long enough for a CPU-Z validation or HWINFO to record a max clock speed no doubt.

Warchild
Quote:
Exactly. Realistically its all BS, but technically it validates their marketing and presentations which they also have evidence.

It's common knowledge Intel have struggled really hard trying to shrink. We know this, given the amount of 14nm CPUs they produced. However, each of those had increasingly higher clock speeds.

It's hard to say what sort of frequency they should be hitting now. Mostly because they have struggled so much. Its not something you can exactly put a roadmap on.

However, AMD's Ryzen has been statistically poor since its launch when it comes to clock speeds. What you see is often what you get, with no wiggle room at all for overclocking. So if Intel work on their node what clock speeds can they reach? like I say, it is hard to know.

It's definitely the one thing that has become stagnant, though, so maybe it's what will happen a lot in the future.Quote
Reply