Intel's planning to leap past PCIe 4.0

Intel 2020 Architecture Day has dropped a lot of information about the company's latest and upcoming products, revealing that some major changes are coming to Intel's Xeon offerings.

For starters, Intel's Ice Lake Xeon Scalable processors are "targetted for the end of 2020", offering users "significant performance in both throughput and responsiveness across workloads". This will be Intel's first Xeon architecture to support PCIe 4.0, and it will also offer users eight memory channels, instruction set enhancements and faster cryptography performance. Ice Lake will also support eight-channel memory.

In the second half of 2021, Intel plans to start "initial production shipments" of Sapphire Rapids, Intel's next-generation Xeon Scalable processor. It is due to power the Aurora Exascale supercomputer system at Argonne National Lab, and bring with it PCIe 5.0 support as well as DDR5 memory support.

Thanks to Intel's SuperFin 10nm technology, Intel plans to deliver its customers a significant performance and efficiency boost over its existing CPU offerings. This enhanced 10nm node will allow Intel to release processors with higher clock speeds, and operate at lower voltages. When combined with DDR5 memory support and PCIe 5.0 compatibility, Sapphire Rapids will deliver Intel some major performance benefits across a wide range of workloads. 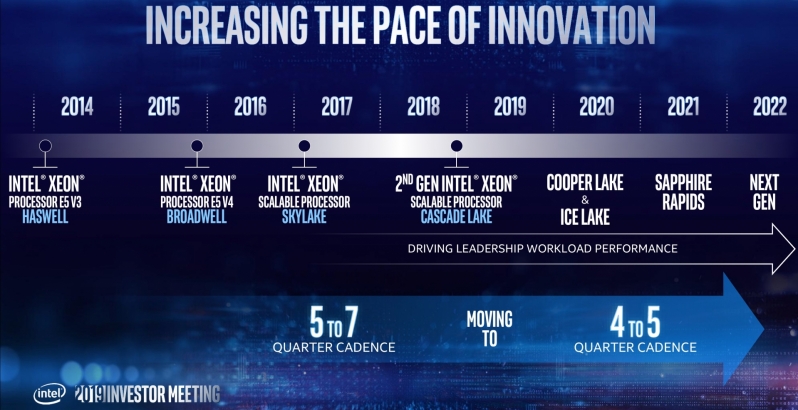 In 2021, Intel plans to release processors with PCIe 5.0 support and DDR5 memory support. This the move, Intel hopes to leapfrog AMD's EPYC lineup. That said, by the end of 2021, AMD will be preparing to move to Zen 4, and TSMC's 5nm lithography node. Will 10nm SuperFin be enough for Intel to surpass AMD's future offerings?

You can join the discussion on Intel's confirmation that Sapphire Rapids will support DDR5 and PCIe 5.0 on the OC3D Forums.

g0ggles1994
As long as EPYC gets DDR5 and PCIe 5.0 at the same time, Intel won't have an answer for that.Quote

looz
Quote:
Even if EPYC is a better deal on average, there are specific workloads which favour Intel - and competent people do benchmark this before pulling the trigger on an order of this magnitude. I'd also imagine with larger orders there's plenty of wiggle room in pricing and they've got plenty of contracts with large providers already.

It's awesome to see AMD become a great alternative, but Xeons are far from irrelevant.Quote

Avet
Quote:
With AMD you get only CPU. With Intel you get their support team, guaranteed compatibility, and many other nice things. Intel's package is worth so much more.Quote

Kleptobot
I'm curious to see how these high frequency buses affect motherboard cost. There was already mention of increased difficulty and cost associated with PCIe4.0 . It will only get harder as the speeds increase.Quote
Reply