With Unreal Engine, DDR5 can deliver a huge performance boost for Alder Lake

A lot of game developers use Epic Games' Unreal Engine, and most of them want to know what's the best hardware for the job. A strong development system will reduce code compile times, reduce lighting build times, and shorten the time taken to complete a multitude of tasks. Ultimately, this saved time allows developers to iterate on their work faster and complete more work in less time. In short, hardware matters.

Puget Systems is a US-based system builder that conducts some of the most in-depth in-house software testing that we have ever seen. They test software so that they can recommend to their customers the right hardware for their workloads. That way, their customers can get the most value from their systems, and Puget can benefit from a strong consumer-first image.

Puget's latest hardware analysis showcases their work when testing Unreal Engine with Intel's Alder Lake processors, showcasing how it compares to their last-generation and AMD's current generation hardware offerings. Beyond that, Puget has also looked into how DDR5 memory impacts Intel's Unreal Engine performance, and why developers should be looking forward to seeing increased adoption of DDR5.

AMD's still the king, but Intel has bridged the gap

When compared to their last-generation products, Intel's Alder Lake CPUs can deliver a 50-75% performance advantage. That said, these gains are only enough to bring Intel close to AMD's Ryzen 5000 series, besting them in some benchmarks when using DDR5 memory.

For Unreal Engine developers, Puget believes that "the undisputed leader is AMD's Threadripper". That said, their DDR5 memory results give us a "glimpse into what DDR5 has in store" for the PC market. 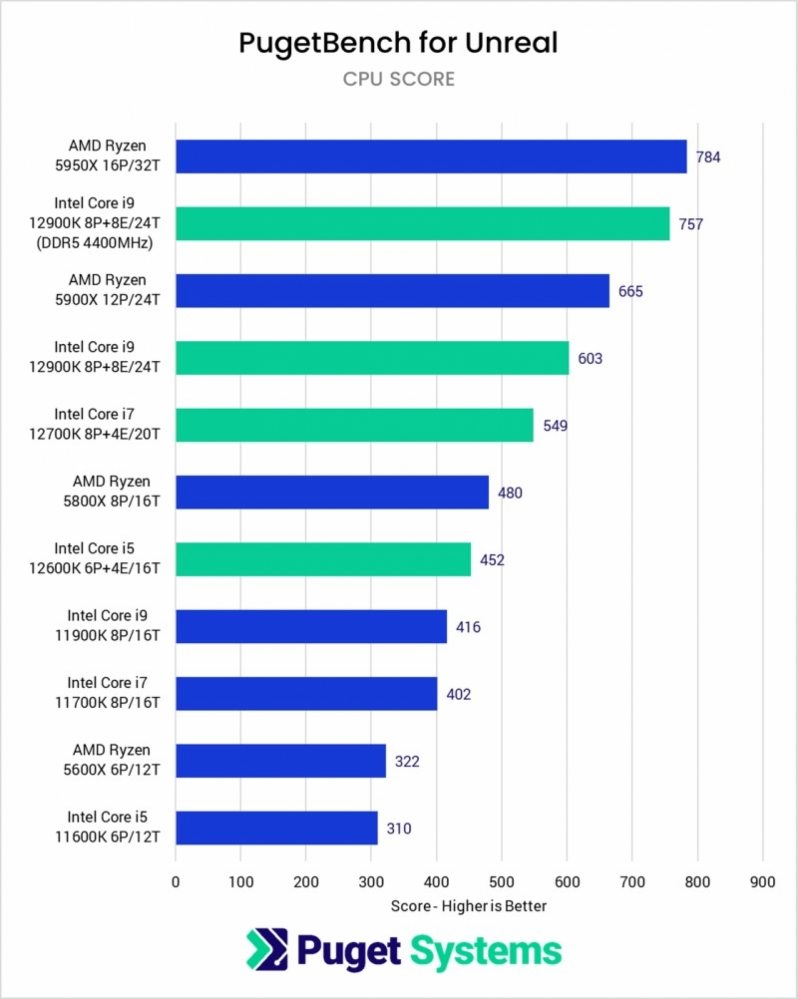 Sadly, DDR5 is not readily available, and that means that most Alder Lake users are stuck with DDR4. Aside from their DDR5 results, all the CPUs tested were using Windows 11 with VBS disabled using the same 3200MHz DDR4 memory kit.

What's noteworthy below is that Intel's i5-12600K is a compelling processor for Unreal Engine 4, even with DDR4 memory. It can best AMD's Ryzen 5 5600X and Intel's last-generation i9-11900K, making it a great value pick for those who cannot afford a more expensive processor.

Overall, Intel's Alder Lake processers deliver strong performance in Unreal Engine 4, but they only do enough to bring themselves close to the performance levels that AMD offer. While DDR5 helps to bridge the gap further, its current lack of availability makes this a non-factor in today's market. 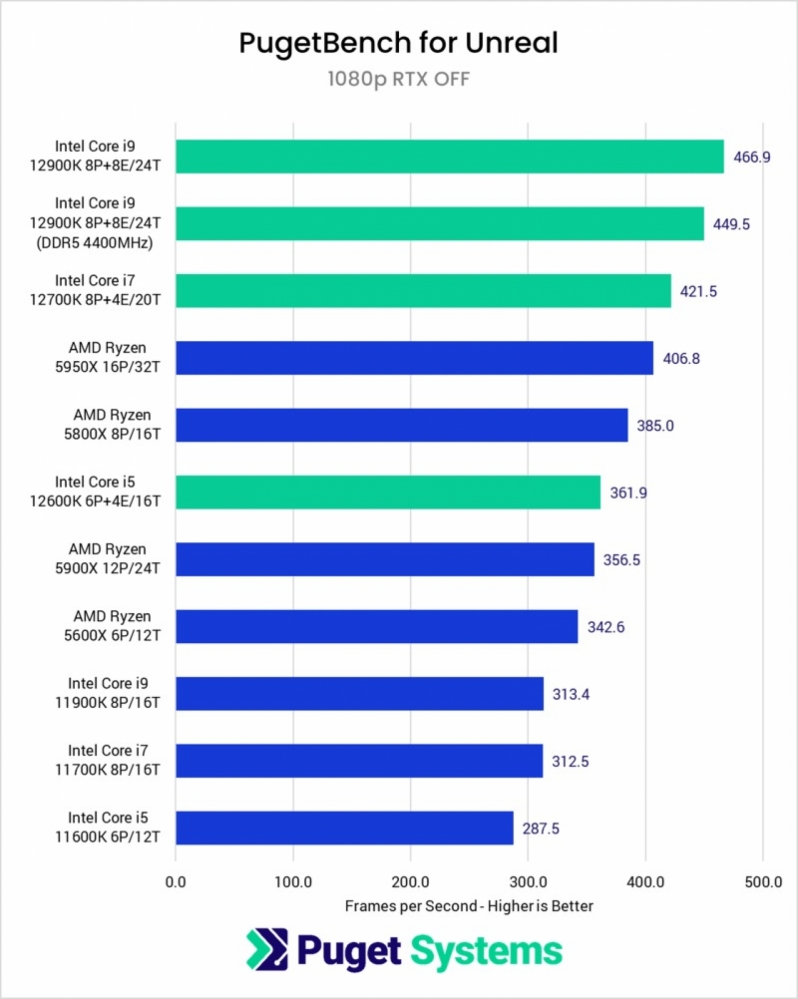 Intel Can Win in Some Areas

When looking at frame rates in test environments, Intel's Alder Lake processors can offer user a performance advantage over their AMD rivals. That said, this workload is not an area where this additional performance is necessary or overly desirable. It is not a primary factor for developers to consider, but a useful showcase that Intel has dramatically improved their processors with Alder Lake.

When looking at Puget's Compile Shaders benchmark, we see a win for Intel, but only when DDR5 memory is used. Faster results may be possible with faster DDR5 memory kits (with higher clock speeds or lower latencies), but Puget's results are based on stability-focused memory speeds for workstation quality systems. That's why they use 4400 MHz DDR5 memory and not high-end 6,000 MHz DDR5 modules.

Alder Lake is a major stride for Intel, but it is not enough to deliver a slam dunk victory over AMD. 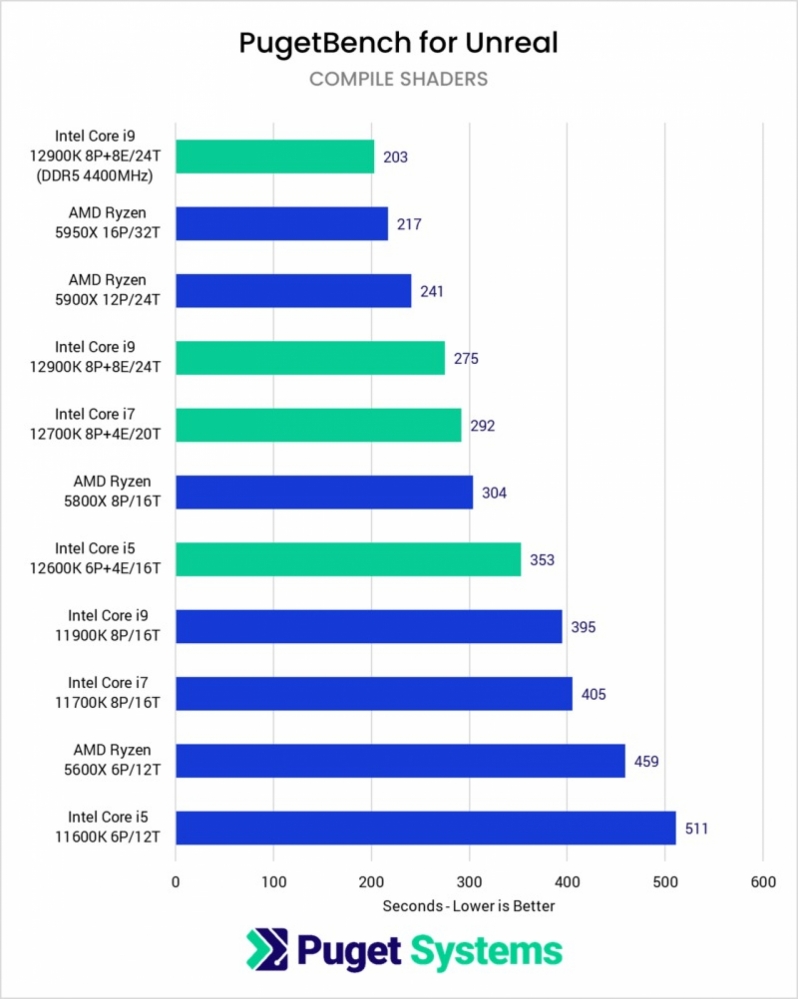 AMD is still the performance leader

Even with DDR5 memory, AMD's Ryzen 9 5950X remains the best processor for Unreal Engine 4 development aside from HEDT options like Ryzen Threadripper. Alder Lake has allowed Intel to catch up with AMD, especially with DDR5 memory, but AMD remains on top.

Given Unreal Engine's love of DDR5 memory with Alder Lake, one has to wonder what AMD's V-Cache enhanced Ryzen (Zen 3) processors will perform when completing tasks within Unreal Engine. If bandwidth matters, surely AMD's expanded and higher-bandwidth L3 caches will deliver notable performance boosts for AMD users. That said, this hypothesis will need to be tested when AMD launches their next-generation Zen 3 CPUs. 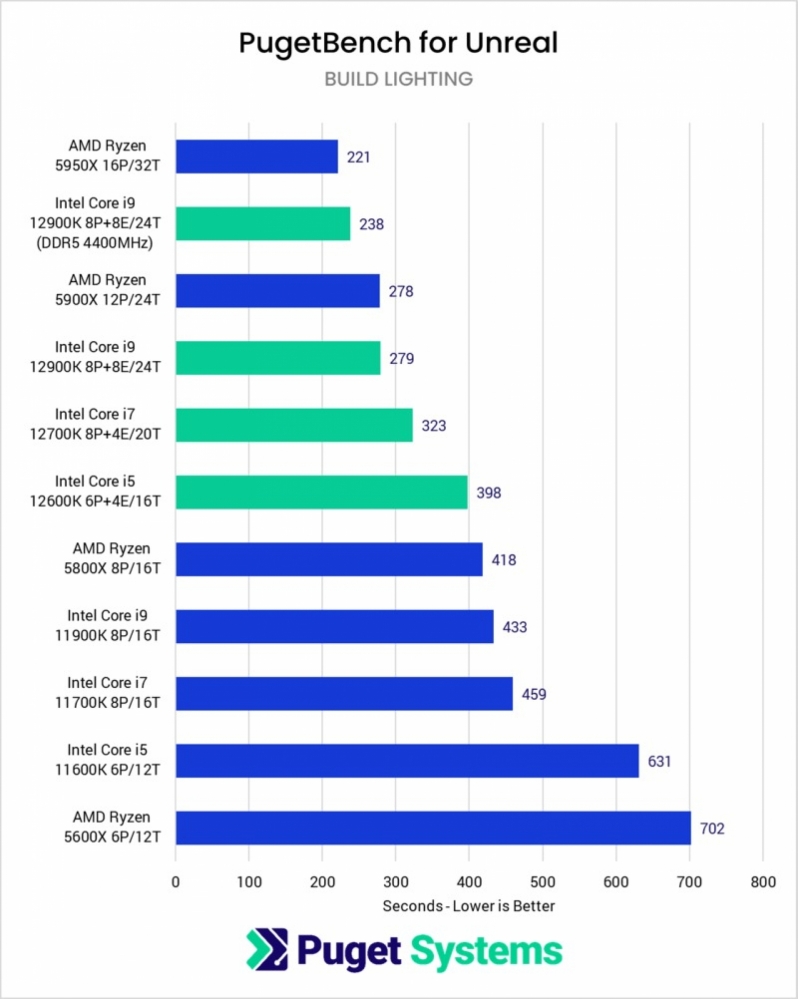 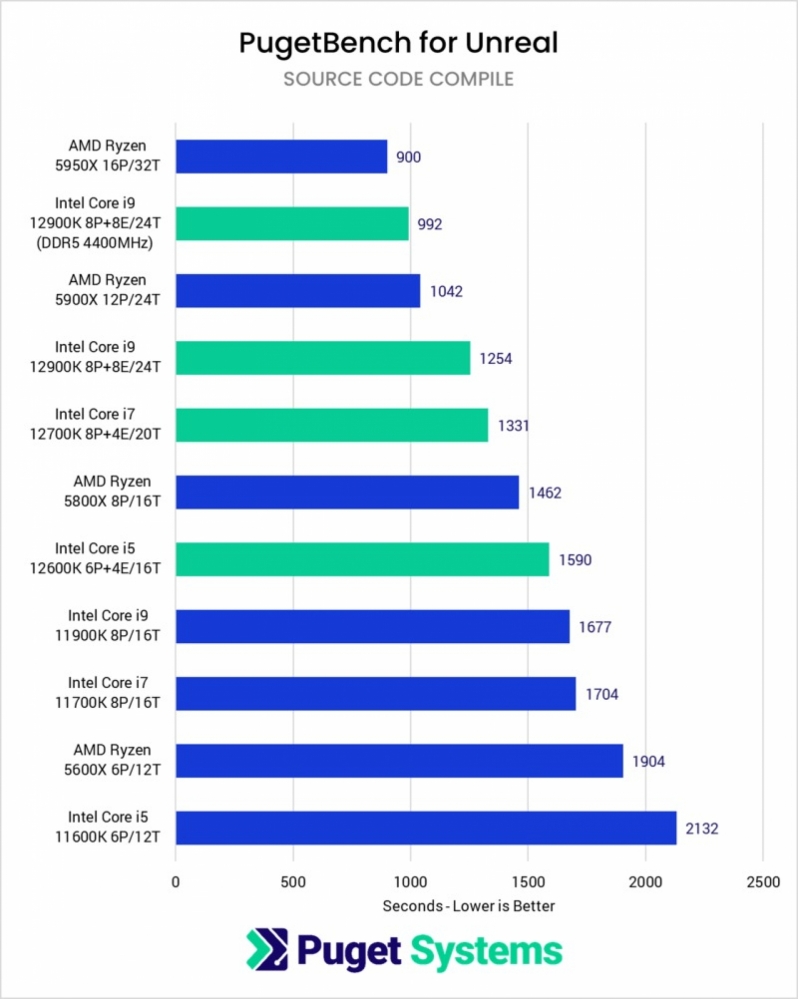 Puget's testing proves that Intel's Alder Lake processors are a major improvement over their predecessors, but not enough to surpass AMD in workloads where they currently excel.

One of the major takeaways from Puget's testing is that DDR5 memory will be a technology of interest for Unreal Engine developers. That said, DDR5's availability will need to drastically improve, and pricing will need to be at affordable levels. This alone has left us excited about seeing what the future holds for CPUs, and how DDR5 memory will help to accelerate development workloads as it matures.

You can join the discussion on Puget System's Unreal Engine Testing with Intel's Alder Lake processors on the OC3D Forums.

NeverBackDown
I'd like to see their scoring system. Otherwise it could be just an arbitrary biased result they choose. Kinda like that userbenchmark crap.Quote

WYP
Quote:
The source link in the article links to their full analysis. It details what workloads they covered.

They are a system builder that offers services where they can test specific workloads for customers to find the best hardware for them. As such, they have had a look at real-world developer workflows and have tested the workloads that their clients deem as important.

As for exact score ratings, I don't know how they are calculated. It is mostly related to the time taken to complete a task and other similar measurements. I believe there is a lengthy video from Smarter Every Day that showcases how their testing works in detail for some applications, but it is a few years old.Quote

NeverBackDown
I'm not saying they are doing anything malicious in testing moreso the final number they put out whatever algorithm they use could have been favoring one product over another. Like userbench


Though I don't believe they are doing that for a Intel vs AMD angle, maybe perhaps in a way to push higher margin products.Quote
Reply