Intel's upcoming 9000 series of processors is probably the worst kept secret in the PC industry. We already know that the series is a Coffee Lake refresh and that the series' maximum core count has been upped from six to eight, equalising Intel's high-end core count to match AMD's Ryzen offerings.

Today, courtesy of Benchlife.info, we have leaked boost clock tables for both Intel's i7-9700K and i9-9900K, revealing high boost clock speeds for both single-threaded and 8-threaded workloads, maxing out at 4.9GHz and 5.0GHz respectively on Intel's i7 and i9 CPUs.

Intel's advantage over AMD is their ability to offer higher single-core clock speeds, something which Intel plans to leverage with their upcoming 9000 series processors. 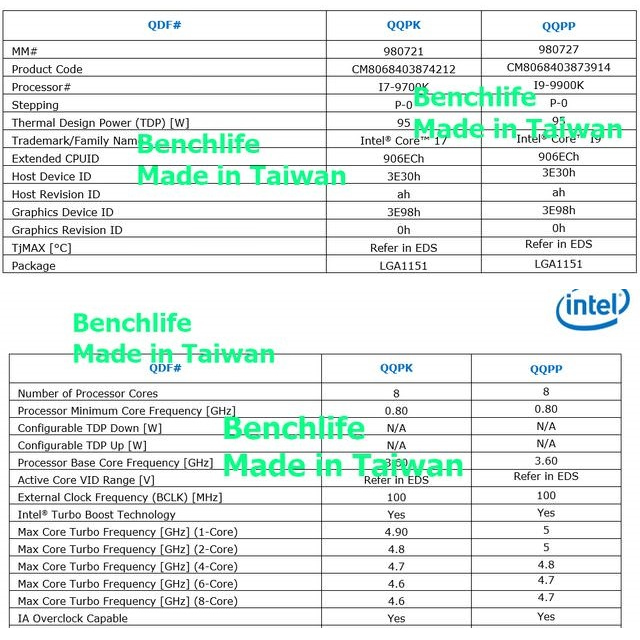 Intel's 9000 series processors are expected to release in late September alongside new Z390 series motherboards, which will ship with native support for Intel's latest processors. All of today's 300-series will offer support for 9000-series CPUs through BIOS updates.

AlienALX
Noting very carefully that it says "Max" before each one, meaning it is not guaranteed.

You'll likely need hefty cooling and a hefty board to match.Quote

Gothmoth
well if these numbers are right i believe that intel will get rid of TIM.


otherwise these CPU would melt....Quote

Damien c
Quote:
I think there was a "Leak" a few weeks or months ago, that the next CPU's from Intel would be soldered and not using TIM.

)", but then also sell some that have the IHS pre applied using Solder or TIM, for those who have no issues with the way they are.

AngryGoldfish
If this doesn't require exotic cooling (or even just a big AIO) and a fancy motherboard, these CPUs will pretty much own Ryzen+ in terms of performance. Intel will be back on top of the performance charts across the board. This is will be great for people who want to buy AMD because it will likely spell a big price drop for Ryzen+. We could see the 2700X drop to €250.Quote

Bhebhe
its a battle of supremacy between the threadripper.Quote
Reply