If you can't beat them, join them

During their IDM 2.0 focused "Intel Accelerated" keynote, Intel announced that it would be changing its process technology naming scheme to match the naming schemes used by the rest of the semiconductor industry. While 10nm and 10nm SuperFin will retain their current names, the company's new 10nm Enhanced SuperFin and newer nodes will feature an all-new naming scheme for Intel.

Lithography Node names are traditionally linked with gate widths, but as process technology continued to get smaller and smaller, node names diverged from this key metric. New transistor designs and enhanced node characteristics allowed manufacturers to improve the performance and efficiency of their transistors without gate size decreases, making node names based on gate size irrelevant.

TSMC, Globalfoundries and Samsung have all moved away from traditional node naming methods, and now Intel is doing the same. Intel's 10nm node is similar in size to TSMC's 7nm node on a per-transistor basis, which is why Intel's new 10nm Enhanced SuperFin node will be called Intel 7.

Intel's 10nm Enhanced SuperFin/Intel 7 node is now in volume production, and with this node, Intel has promised a 10-15% improvement in performance per watt, which is great news for Intel upcoming Intel 7 products.

The Intel 7 name signals that this node delivers similar characteristics to 7nm nodes from Samsung and TSMC. Intel has started producing more 10nm wafers than 14nm wafers this quarter, signalling that their 10nm/Intel 7 based products have now entered mass production.

Intel 7 will be used to create Intel's Alder Lake desktop/mobile processors and the company's Sapphire Rapids Server processors. Products based on Intel's Intel 7 node will be launched this quarter with Alder Lake. 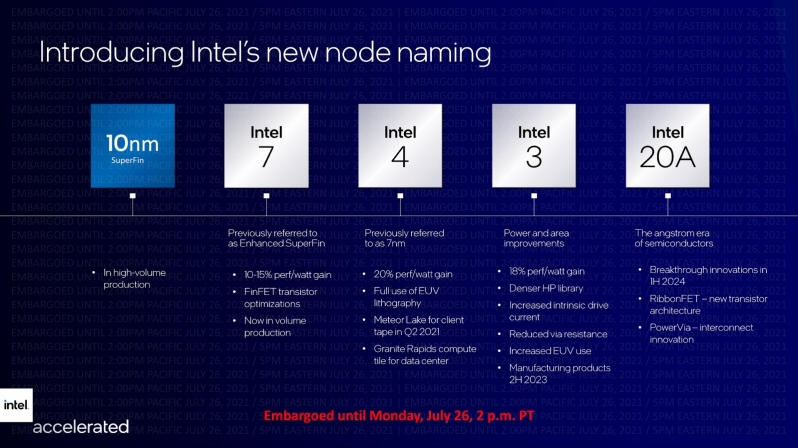 The future of Intel - An Accelerated Lithography Roadmap

Intel's planned 7nm node has now been renamed to Intel 7, promising users a 20% performance/watt gain and smaller transistors through the "full use" of EUV technology. Intel's "Intel 4" node will be used to create their Granite Rapids compute tiles for datacenter CPUs and to create the company's Meteor Lake compute tiles.

Intel 4 will be 2x as dense as Intel 7, offer customers a 4x reduction in design rules and support Intel's next-generation Foveros and EMIB technologies. Intel's "Intel 3" node will deliver further benefits, with Intel planning to create products using the node in the second half of 2023.

With Intel 20A, with A standing for Angstron (10^-10 m/0.1nm), Intel plans to offer their customers a fully next-generation process technology. Intel 20A will be a process node that's based on GAAFET (Gate-All-Around FET) technology, utilising what Intel calls RibbonFET technology. RibbonFET will be Intel's largest process technology shift since their move to FinFET in 2011. 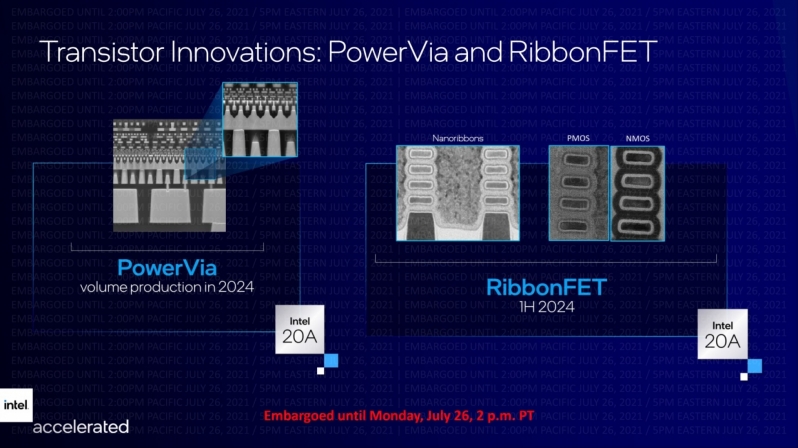 Alongside their new process technology roadmap, Intel has revealed enhancements to their packaging technologies to facilitate the creation of new 3D processors.

The critical thing to consider with these announcements is that they don't exclusively apply to Intel's own products. Though IDM 2.0, Intel will be opening up its fabs to 3rd parties to facilitate the creation of non-Intel products using Intel's lithography and packaging technologies. Intel has confirmed that Amazon and Qualcomm will be Intel Foundry services customers, a change that will allow Intel to profit from its own products and those of its competitors. In theory, even AMD could manufacture their future processors at Intel's fabs.

You can join the discussion on Intel new process technology naming scheme and technology roadmap on the OC3D Forums.

NeverBackDown
I don't think it has anything to do with if you can't beat them join them. They were effectively equal. Intel was just being far more honest about it based off previous measurement standards. If anything they should be commended for not using marketing tricks.


The new method of lithography measurement should be based on Transistors/mm^2. Or as Intel used to use before this change unless they keep this going, MTr/mm2(mega-transistor per mm squared).

Or if you want to follow a different way if measuring the industry should adopt LMC, though it's more of a system measurement for CPU/RAM purposed by nine authors from Stanford, MIT, Berkeley, and TSMC. It does have it's own downsides though but at least it would be standardized
https://ieeexplore.ieee.org/document/9063714Quote

Warchild
Is Intel 20A a link to the amount of amps you need to run through the new nodes in order to beat AMD?

just kidding. Its been a long long time since I had any interest in CPU media, mainly because we just dont see innovation. I wonder how this will change things.Quote

WYP
Quote:
Yes, but as things have moved on it has become clear that there is more to lithography technology than transistor density. While I agree that nm is a bad metric, it conveys the point that manufacturers look at.

TBH, there is no single metric that can be used to convey the right message, as both silicon density and performance matter. There is a reason why only 10nm Enhanced SuperFin will be called Intel 7. Intel's other 10nm nodes weren't even good enough for huge scale production. There is a reason why Intel has launched 14nm CPUs this year.

Transistor density alone is not a good enough metric, and while the "standard" nm naming scheme is not accurate it is understood, which is the entire point of the naming scheme.

The expectation is that nodes with smaller numbers are more transistor dense and offer performance/watt improvements over their predecessors. Going beyond that goes above the paygrade of most folks and anyone actually building processors can look at the full specs of each node.

At the end of the day, Intel's name changes are just marketing. It is them getting away from the 14nm+++++ era and into something new.

Should Intel be commended? Not after their prior attempts at 3rd party manufacturing. Node names with less marketing spin is a small deal when compared to that.

Remember when LG planned to use Intel 10nm to make mobile chips in 2016? Now that was a disaster that Intel did a great job hushing up. Now LG has exited the phone industry entirely... Intel had other customers planned for their original 10nm node, it was a disaster.

NeverBackDown
Transistor density is a far better metric than anything they use now. It directly correlates to performance, so your point of density and performance matter, is exactly why it's a good metric. This is just an agreement you are making while trying to prove it's not a good metric. The more transistors per square mm, 1) correlates to actual smaller lithography, 2) means more performance in a given area, 3) means you can make smaller CPUs which can lead to higher efficiency, or translate to more complex designs for high performance (adding new instructions for say AI, etc), 4) allows a greater margin of profitability since you can make more per wafer

Using any example of an "optimized" version of a node is not that strong of an argument imo. It could very easily have been called Manufacturer name :XXnm+. As it should have be since it was an optimized version of the previous. It conveys the same message of advancement and better.

None of the examples really have any merit. Ya people understand it but it doesn't make a difference to the actual real life measurement. People who care are the ones who would understand the new technique of measuring. The average Joe already doesn't know or care about what NM size their CPU is.

Should also remember those efficiency gains quoted by manufacturers such as 20% improved perf/watt aren't always accurate as they could be testing some very simple logic unit for say a radio chip, whereas it wouldn't directly translate to a high performance CPU. This was what Lisa Su said a few years back about the Foundries in general (think it was in reference to GF). I can't find the link. Been a long time. This is just another reason that going from 7nm to 6nm really doesn't mean anything. Especially when looking at the actual density increase being very marginal.


I don't see how Intel's initial failure has really anything to do with this topic of measurement. If you care to elaborate then please do.

If you are concerned about people not understanding, then that's why I mentioned LMC. It can be easily understood and abstracted enough for someone to comprehend. It's just measuring the CPU(L) Memory (M) and Interconnect/cache between CPU and memory(C)Quote

grec
At the end of the day, a public naming scheme for tech is always marketing, there may have been times when this was ostensibly an actual measurement, but even for Intel it's long been a calculation whose result is intended to convey a comparative or marketing purpose, rather than a measurement that is practically useful to anyone on the technical side. The LMC approach is useful for making comparisons, but even then these are very regressive comparisons given the wide range of performance characteristics you would want to asses when comparing modern nodes, and the results are more of a loose guide than something you could use for practical detailed comparisons.

But regardless, this is a lot simpler and easier, and I don't think consumers are losing anything here, with Intel's previous naming scheme they had what was technically a measurement, but nothing else in the industry was being measured with the same ruler, and even if other people in the industry theoretically did use the same ruler, there are so many nuances in that calculation that the resulting comparisons would probably need a bucket of caveats just as they do now.Quote
Reply