Intel has finally launched its 11th Gen Rocket Lake processors, bringing the company's Cypress Cove architecture to the forefront with a promised 19% Instructions Per Cycle (IPC) improvement over their last-generation counterparts.

With their 11th Generation processors, Intel claims that they have an architecture that's designed to "push desktop gaming performance to the limits", with their i9-11900K boasting core clock speeds as high as 5.3GHz while supporting faster 3200MHz memory out of the box. 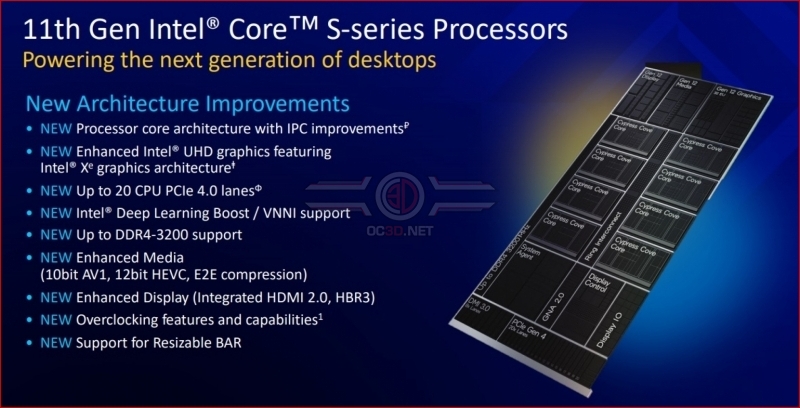 In Intel's tests, their i9-11900K can deliver an 8-14% performance advantage over its last-generation counterpart across the four games below. Note that Intel only tested four games, a factor that leaves a lot of room for Intel to cherry-pick data. 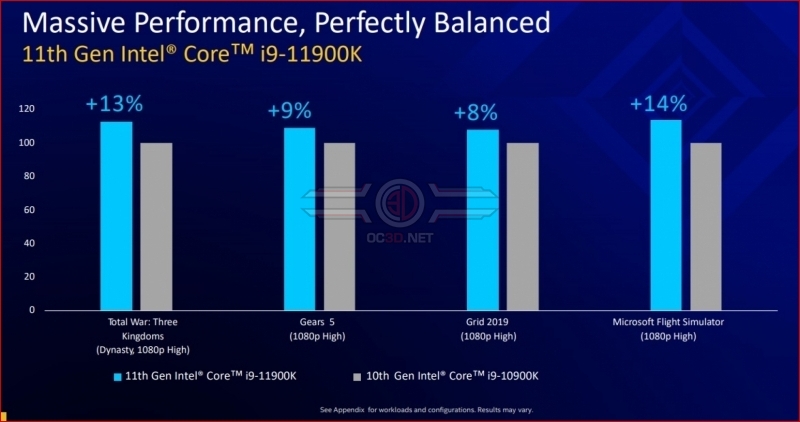 While Intel's lead is not massive, it is enough to give them an advantage in these games, that said, Intel only tested four games. I this cherry-picked data? We will need to wait for full Rocket Lake reviews. 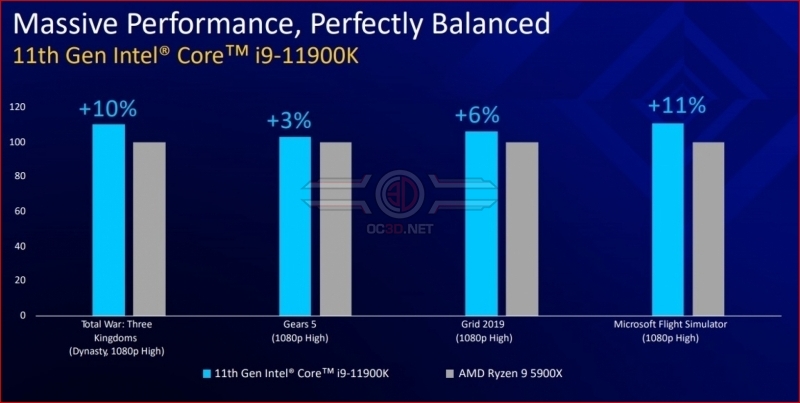 In the lower-end of Rocket Lake's gaming lineup if the i5-11600K, which Intel does not compare to AMD's Ryzen 9 5600X. When compared to its last-generation counterpart, the i5-11600K offers gamers a 7-16% performance boost in the games below. 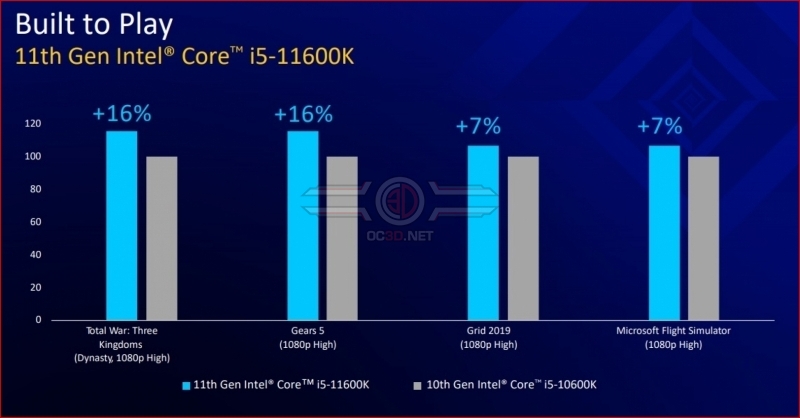 Intel is working with game developers to optimise their titles for their processors, news that comes as a clear indication that Intel is worried about AMD's future Ryzen processors. Today, Intel is focusing further on developer collaborations, and this should help maximise the performance of games on Intel's latest and future processors.

With AMD's Zen architecture powering all next-generation consoles, Intel needs to put in the effort to make sure that games are developed with their products in mind. Intel cannot afford to fall behind here, and Intel has the budget and reach to ensure that applications take advantage of their processors. These collaborations will also be good for AMD users, as efforts to make games more multi-threading friendly will help everyone, even console gamers.

When compared to their last-generation processors, Intel claims that their Rocket Lake CPUs offer their users a significant boost in productivity, despite the fact that the i9-11900K has two fewer cores than the i9-10900K. Cypress Cove is good enough to counter Intel's lowered core counts, at least in their selected benchmarks.

When compared to AMD, Intel has claimed a performance lead in a wide range of applications, though it is worth noting that Intel is not using the same benchmarks as their 10900K comparison. That said, what Intel is showing here is that there are applications where Intel's i9-11900K comes out on top.

With a price tag of $262, it looks like Intel are planning to undercut AMD's $299 Ryzen 5 5600X, which makes sense given how Intel has not compared these two processors in their slides. This suggests that these processors are closely matched, but that Intel cannot promise gaming leadership. Intel wouldn't hide that data if their i5 beat AMD's Ryzen 5.

Instead of releasing new i5 or lower models, Intel has decided to refresh its Comet Lake CPU lineup with new 10th generation models. These new CPUs will feature higher core clock speeds and lack some of the new features within Intel Rocket Lake lineup. These CPUs will not be called 11th Generation Intel processors, simplifying Intel's naming scheme by making 11th Gen S-series CPUs Cypress Cove-only.

You can join the discussion on Intel's 11th Generation Rocket Lake processors on the OC3D Forums.

AngryGoldfish
These will sell well I think. Not nearly as well as Alder Lake if it's as good as supposed, but unless AMD comes out with that Zen 3 refresh, I think they'll lose a bunch of income to this.Quote

66racer
Not upset about these specs but the price of the 11900k vs 11700k is odd. Makes me wonder how overclocking will be between the two of them. The 11700k could be a good value.

I would like to see the boost clock table for these Intel CPU, in real world use where someone is listening to music, chrome tabs for days, 2+ programs open at the same time, I wonder which would be the winner.Quote
Reply