Up to 40 cores, eight memory channels, and support for PCIe 4.0

It's official; Intel has finally launched Ice Lake-SP, the processors behind the company's third generation of Xeon Scalable platform. 10nm is here, and with it comes up to 40 cores, PCIe 4.0, 8-channel memory support (per socket), and the benefits of Intel;'s new Sunny Cove CPU architecture.

One of the killer features of Intel's latest Xeon Scalable processors is the company's DL Boost technology, which comes thanks to Ice Lake's integrated AI acceleration, an aspect of Intel processors that AMD cannot match. That said, AI performance is not useful for all users, making this feature a niche add-on, not an AMD-killer.

What's worth noting is that when Intel compares their Xeon 8380 (Ice Lake) to their Xeon 8280 (Cascade Lake), Intel is comparing a 40 core processor with a 28 core processor. That's a 42.85% increase in core count, making Intel's performance claims seem a lot less impressive. 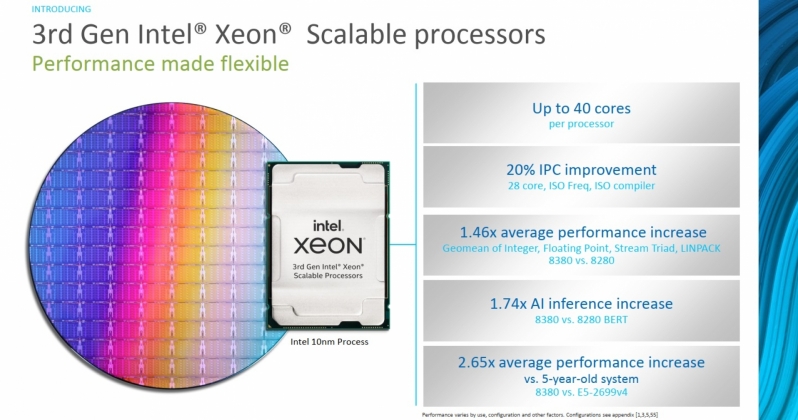 With Ice Lake, Intel will be feeding their cores with an upgraded integrated memory controller that supports up to eight memory channels per socket and memory speeds of up to 3200MHz. This is a major upgrade over their last-generation Xeon Scalable offerings, which supported lower memory speeds and up to six memory channels.

If there is one feature that Intel is pushing with their 3rd Generation of Xeon Scalable processors, it's AVX-512. Their competitors don't support it, and it can offer users major performance boosts when using optimised code. In workloads that utilise AVX-512, Intel's new Xeon Scalable processors can hammer their Zen 3 rivals, but that requires Intel's clients to optimise their code specifically for their processors, requiring a major coding investment that will lock their applications to Intel's CPUs. 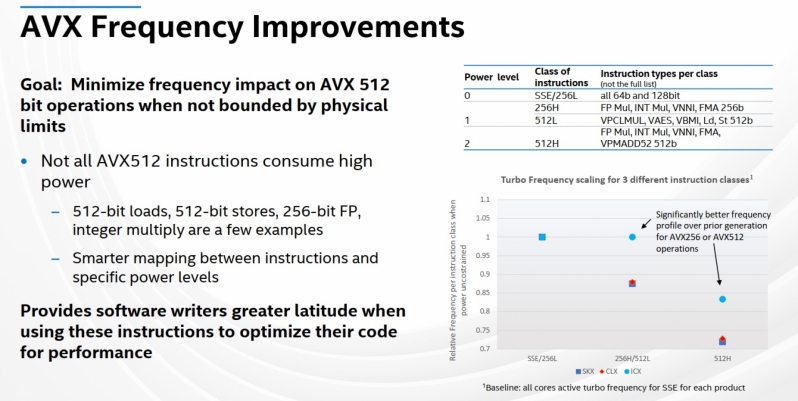 Intel's 3rd generation of Xeon Scalable processors are a major step forward, but it is hard to see it changing the competitive landscape in a major way. Intel is now offering more cores per processor, but AMD can still offer more. What's worse is that Intel's marketing is not claiming many areas of performance leadership over AMD outside of AVX-512 compatible workloads.

Ice Lake offers Intel's customers more cores, an enhanced core architecture, PCIe 4.0 support, enhanced AVX-512 performance and a range of other smaller improvements. That said, AMD has offered its EPYC customers features like PCIe 4.0 support since 2019. While Ice Lake will gain Intel performance leadership in some markets, it is not an EPYC killer. Ice Lake has improved Intel's competitive positioning, but it has not put them back on top.

You can join the discussion on Intel's 3rd Generation Xeon Scalable processors on the OC3D Forums.