Is this a response to AMD's Athlon 200GE?

A new Intel Pentium has started to appear at retailers, coming with an availability date in March and a clock speed of 4GHz, a first for Pentium series. While this Pentium Gold G5620 retains its dual-core, quad-thread core configuration, DDR4-2400MHz memory support and a TDP of 65W, the CPU its boost in core clock speed should enable the systems it powers to feel snappier under many workloads, both single-threaded and multi-threaded.

In a way, this is a response to AMD's $50 Athlon 200GE, which released last year for a mere $55 price tag. With the Pentium Gold G5620 Intel are asserting its dominance in the low-end market, delivering higher clock speeds than AMD's competing offerings, that said it is unknown what Intel's retail pricing will be when the processor releases. Currently, this processor is listed at Futureport and ISO-Datentechnik with no pre-order price tag. 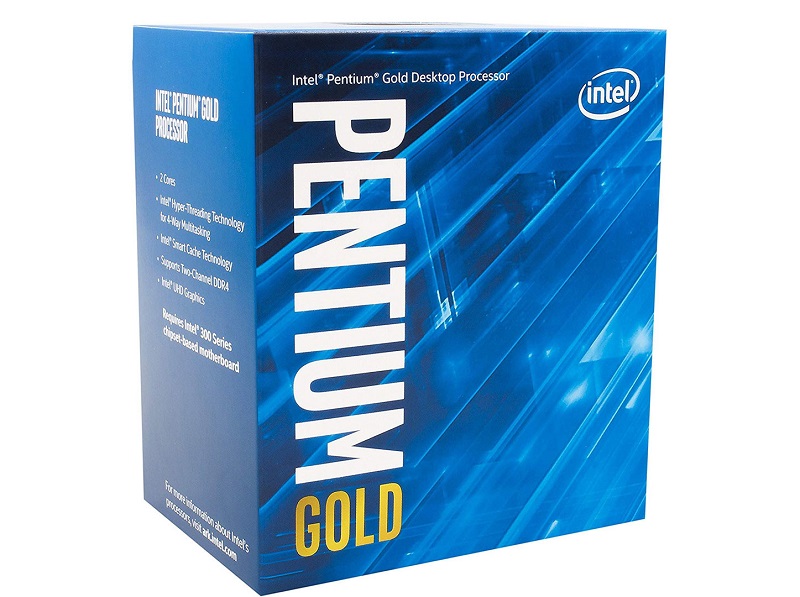 You can join the discussion on Intel's first 4GHz Pentium Processor on the OC3D Forums.

m00nlightsh4d0w
How well would these Pentiums run CS:GO ?

Obviously I'm asking because CS:GO isn't very good at running multicore and my friend wants to play it on low budget. Thanks in advance.Quote

grec
https://static.techspot.com/articles...bench/CSGO.png
This one could perform about 10% better so it should be close to R2200G at stock in minimums I'd say check prices of all 3 models and see how you feel the benefits stack up against the extra cost with your budget.

If the R2200G isn't much more and the motherboards are about the same I'd definitely consider that as the go to option for better performance in more modern games thanks to the full 4 cores, overclockability & future upgradability.Quote

AlienALX
Ryzen have a decent GPU, though. So I would say it all depends on the GPU side, because people buying these use it.Quote

looz
Quote:
Not too well, CS:GO can occasionally choke on 4 actual cores nowdays due to more resource intensive sounds (HRTF) and hitbubbles.

I'd probably seek a i7-8700 for just CS:GO. It can suck up to 90% CPU usage even with an overclocked 8700k, but that happens at quite high framerates.

Oh and I consider most CS:GO benchmarks flawed since they use a workshop map - actual 128tick servers are more demanding, especially when teams stack nades etc.Quote
Reply