At CES 2022, Intel has today revealed their 12th Generation of H-series mobile processors, high performance CPUs for gaming, mobile workstations, and content creations. These processors bring Intel's hybrid x86 architecture to the mobile market, an area of the PC market where it will arguable shine brightest.

While Alder Lake has already impressed desktop users, its H-series of high-performance mobile variants are due to shine brighter due to Alder Lake's efficiency-focused features. When TDPs are constrained, efficiency matters, and Intel's Alder Lake 12th Generation H-series processors promise users up to 40% faster performance than their 11th generation counterparts. 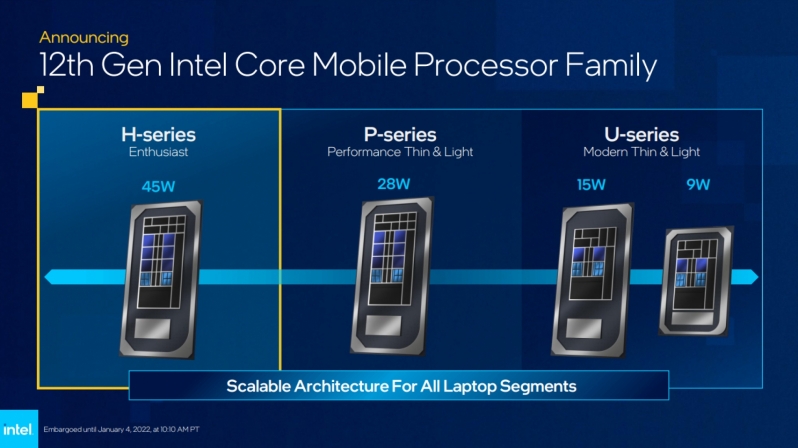 Today, Intel's revealing their new H-series of Alder Lake mobile processors, though the company has also highlighted their new P-Series and U-series variants, which will support lower power targets for thin/light and long better life devices.

With their H-series, Intel's targeting content creators, gamers, and workstations users, delivering the highest sustained performance levels of their mobile lineup and support for clock speeds that can boost as high as 5.0 GHz. 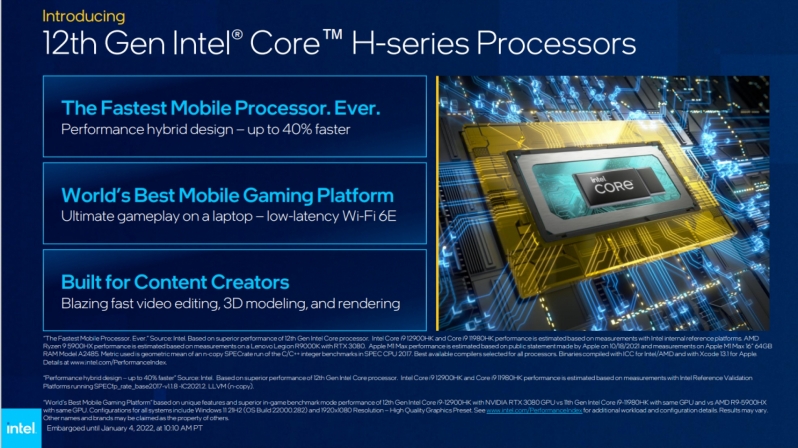 Intel's H-series processors support DDR5, DDR4, LPDDR5 and LPDDR4X memory, which means that Alder Lake H-series users will need to check with their notebook manufacturer to see which memory type is used in their notebooks. DDR5 should deliver the highest bandwidth/performance levels, though DDR4 systems should be more affordable and easier to upgrade (if your system supports user replaceable memory modules). 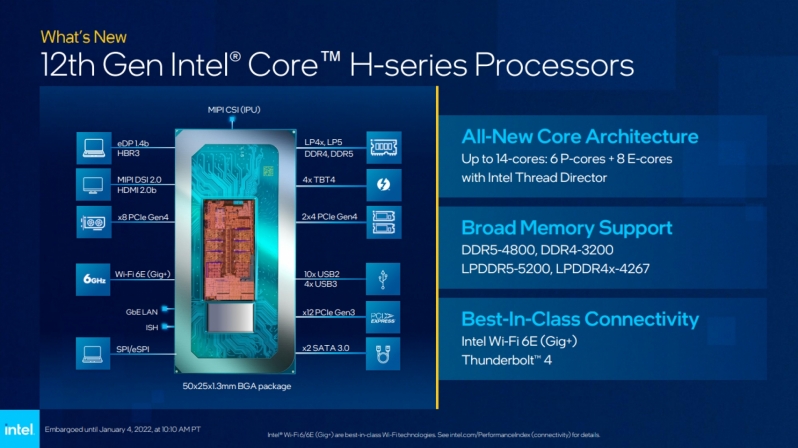 Below are the eight CPUs that make up Intel's 12th Generation Core H-Series lineup, all of which offer users eight (or more) cores and varying numbers of E-cores and P-cores. 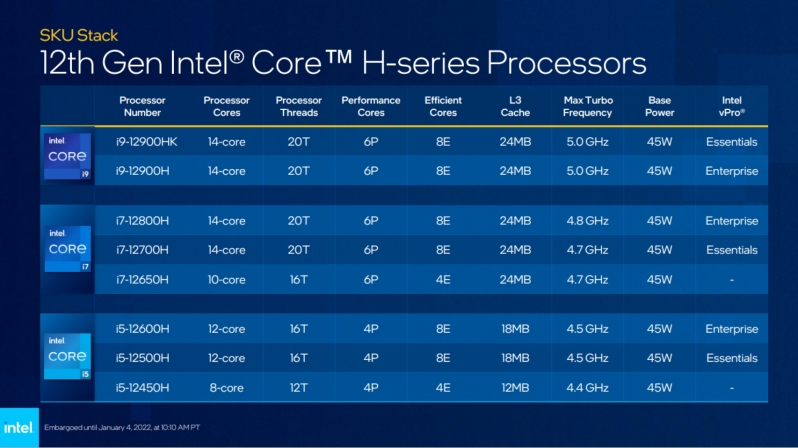 With their internal benchmarks, Intel promises users the "fastest mobile processor ever". While Intel produced benchmarking data should be taken with a grain result, as should the benchmarks or all manufacturers, it is hard to argue that what Intel's showing here is impressive.

That said, this slide showcases how impressive Apple's M1 Max CPU is when compared to mobile Ryzen and Intel 11th generation processor, showcasing why Intel needed a major performance leap with Alder Lake. Beyond that, AMD's likely to reveal new processors today, which will likely offer higher efficiency levels than the CPU shown below. 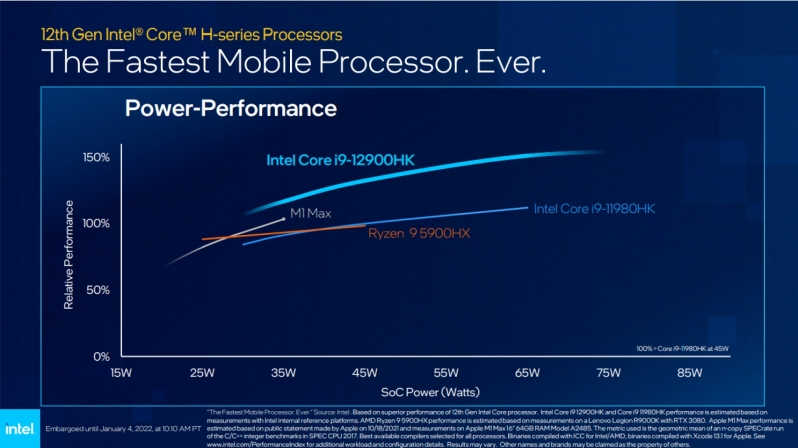 With their 12th Generation H-series processors, Intel's promising gamers leadership mobile gaming performance, offering higher levels of gaming performance than AMD's Ryzen 5000 mobile series and their 11th generation core mobile processors across a variety of games. Intel's promising up to a 28% performance advantage over their 11th generation processors, which were already consider (by Intel) faster than AMD's Ryzen 5000 mobile series.

Note that these game benchmarks were selected by Intel, which means that many of these results are likely to be cherry picked to showcase the largest gains that Alder Lake offers. Even so, these gains are impressive. 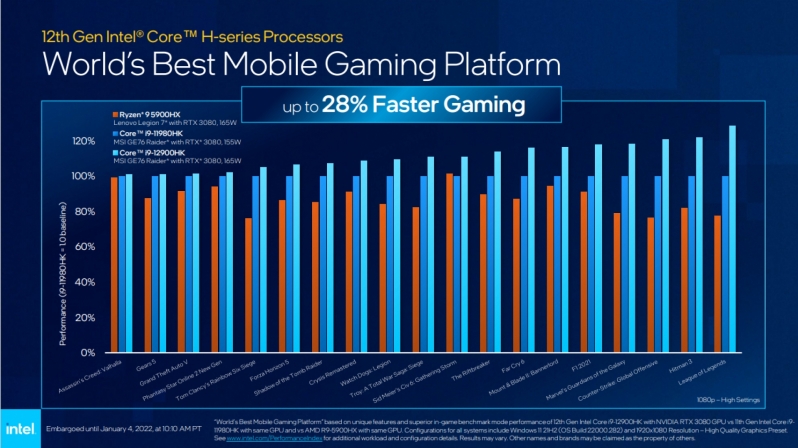 In content creation workloads, Intel's promising users a tremendous performance leap, especially in Premiere Pro. While it is worth noting that Intel's 12th Generation CPUs are using DDR5 memory in this test (with other memory types likely delivering lower performance gains in some apps), it is hard to argue with a 44% performance leap in some workloads. 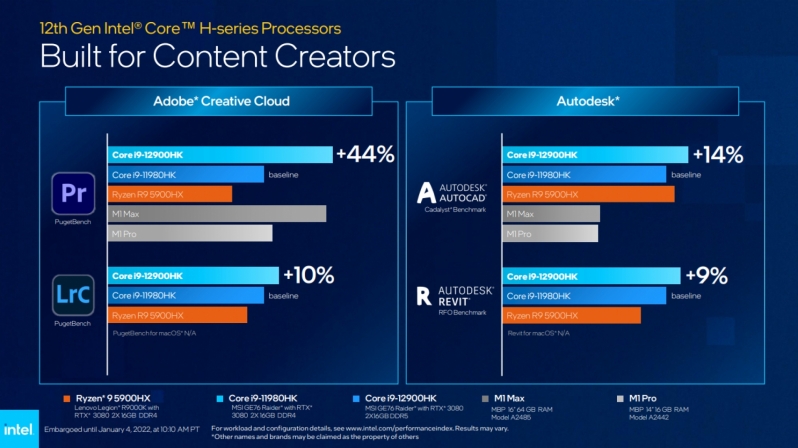 Intel has stated that this is the fastest H-series product ramp to date, with over 100 designs being confirmed. This will include designs from Acer, Dell, Gigabyte, HP, Lenovo, MIS, Razer and ASUS/ROG. We can expect to see many of these products as CES 2022 progresses. 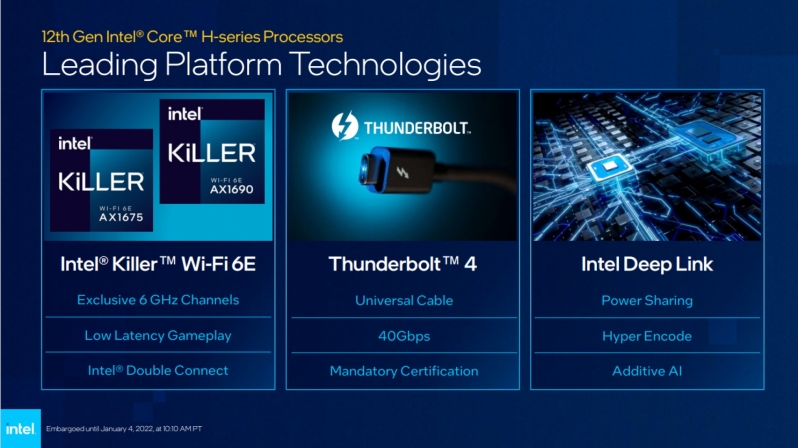 You can join the discussion on Intel's 12th Generation H-series processors on the OC3D Forums. 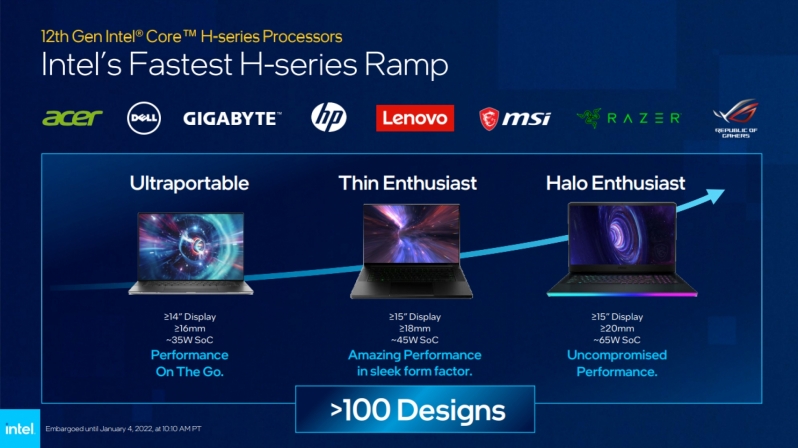