Raptor Lake's desktop parts could launch as early as Q3 2022

Intel has confirmed that their next-generation CPU architecture will be called Raptor Lake, offering desktop users up to 24 cores and 32 threads, new overclocking features and a significant performance boost over today's Alder Lake chips.

According to Moore's Law is Dead, Intel are trying to move up their Raptor Lake launch to Q3 2022 to tackle AMD's Zen 4 lineup. The launch is allegedly in late Q3, with mobile Raptor Lake product reveals coming in Q4.

Intel's Raptor Lake processors will be compatible with today's LGA1700 Alder Lake motherboards, though Raptor Lake is due to launch with new 700-series motherboards from all major manufacturers. 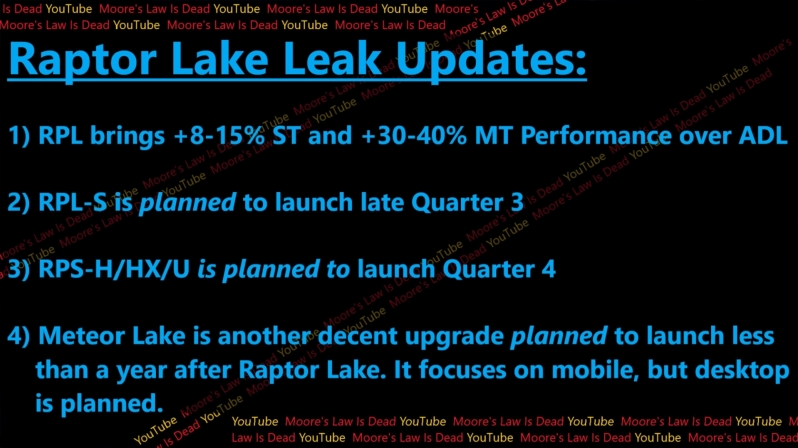 AMD's Zen 4 processors are due to launch this year, arriving over a year after the release of their Zen 3/Ryzen 5000 series processors. If Intel and AMD continue launching products at this pace, Intel should be able to overtake AMD in many key areas. That said, we are yet to see what Zen 4 will bring to the table for AMD, and how their latest processors will compare to Alder Lake (and Raptor Lake).

2022 is going to be a very interesting year for the CPU market, as Intel is making a comeback and AMD's preparing to launch processors on a new lithography node and with a new core architecture, both of which could deliver PC users significant performance and efficiency gains.

You can join the discussion on Intel's Raptor Lake-S series performance leaks on the OC3D Forums.