Patches are still in the works for Intel's older archtectures

Over the past few weeks, Intel has been working to bring their Spectre Firmware mitigations to their older CPU platforms, having now released updates for their ageing Sandy Bridge and Ivy Bridge architectures. Now Intel has released updates for all platforms that have been launched published since 2011, though the company plans to release patches for their older hardware in time.

Future patches will cover processors like Nehalem, Bloomfield, Lynnfield, and Clarkdale, though at this time it seems unlikely that motherboard makers will release these microcode patches at a BIOS level, given the age of the motherboards in question. This leaves these updates in the hands of Microsoft, who have already released Intel's Skylake fixes in the form of Windows updates.

Microcode updates can be delivered by an OS during a systems boot-up up sequence, though BIOS level fixes are preferable because they are OS independent. Not all operating systems will able to provide these patches, leaving some systems insecure. 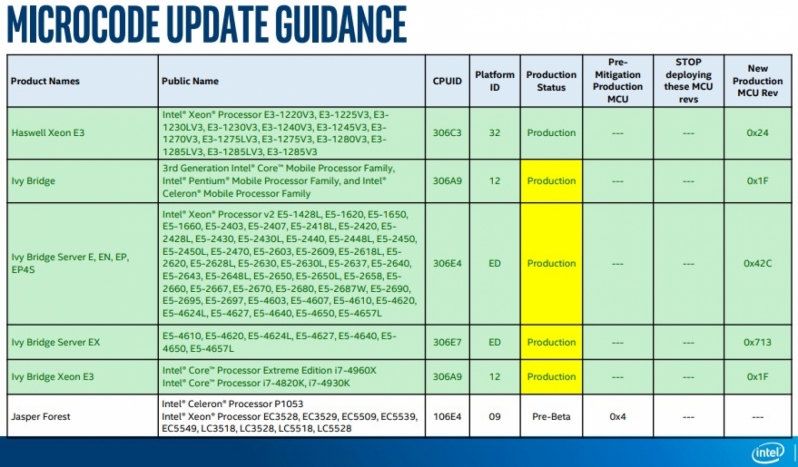 In time, Intel will release patches for Core 2 Duo and Core 2 Quad series processors, again raising questions about whether or not motherboard manufacturers or software makers will deliver these updates to all of their users. Intel seems to have solved the problem on a technical level, though it remains to be seen whether or not they can distribute their fixes before affected systems can be exploited.

You can join the discussion on Intel's Spectre Microcode updates for Sandy Bridge and Ivy Bridge processors on the OC3D Forums.

Dawelio
Quote:
When clicking the link... Only me that gets this?.Quote
Reply