How much has Intel's performance been hit?

One of the big questions over the past few weeks has been the impact that Meltdown and Spectre Security fixes will have on the performance of Intel-based systems.

We have conducted our own performance testing to look at this matter, though what must be noted is that our data does not include BIOS-level fixes for Spectre, so the impact could be higher in the future. These fixes have not been released yet for the motherboard we tested, though we plan to conduct additional testing when a new BIOS is released.

Intel has now released their own internal impact assessment, showcasing how the performance of their 6th Generation and newer CPUs will be hit by Meltdown and Spectre fixes. This data mostly includes synthetic benchmarks, with 3DMARK being the only test used to look at gaming workloads.

Regardless, this data is worth looking at, with Intel providing a PDF of their results and testing methodology here. When looking at Intel's own Coffee Lake results, we can see a performance impact of between 0% (no difference) and 12%, though it is worth remembering that these results are from Synthetic benchmarks and not real-world workloads.

Today we are sharing data on several 6th, 7th and 8th Generation Intel® Core™ processor platforms using Windows* 10. We previously said that we expected our performance impact should not be significant for average computer users, and the data we are sharing today support that expectation on these platforms.

The performance impact of the mitigation on 8th generation platforms (Kaby Lake, Coffee Lake) with SSDs is small. Across a variety of workloads, including office productivity and media creation as represented in the SYSMark2014SE benchmark, the expected impact is less than 6 percent. In certain cases, some users may see a more noticeable impact. For instance, users who use web applications that involve complex JavaScript operations may see a somewhat higher impact (up to 10 percent based on our initial measurements). Workloads that are graphics-intensive like gaming or compute-intensive like financial analysis see minimal impact.

Our measurements of the impact on the 7th Gen Kaby Lake-H performance mobile platform are similar to the 8th generation platforms (approximately 7 percent on the SYSMark2014SE benchmark).

For the 6th generation Skylake-S platform, our measurements show the performance impact is slightly higher, but generally in line with the observations on 8th and 7th generation platforms (approximately 8 percent on the SYSMark2014SE benchmark). We have also measured performance on the same platform with Windows 7, a common configuration in the installed base, especially in office environments. The observed impact is small (approximately 6 percent on the SYSMark2014SE benchmark). Observed impact is even lower on systems with HDDs. 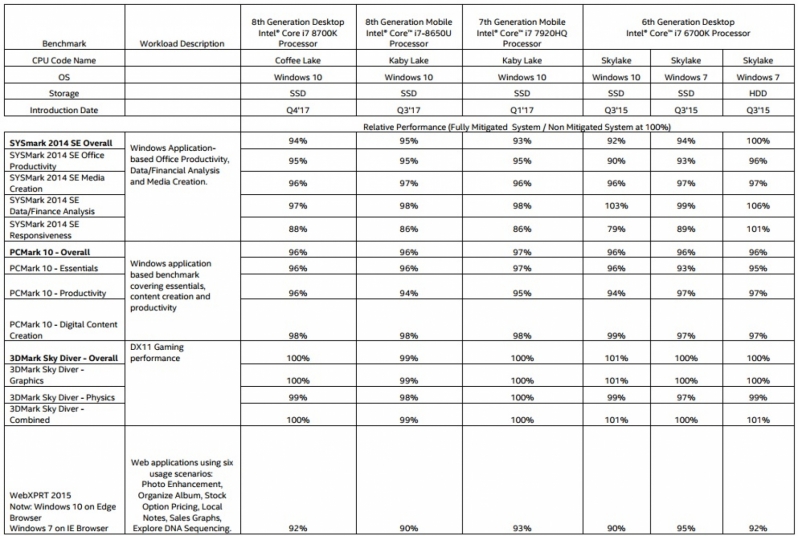 It is a shame that Intel has decided not to release any performance data on their pre-Skylake generation products, as Coffee Lake, Kaby Lake and Skylake are mostly the same CPU architecture, with clock speeds and core counts being the only real differentiator between each platform.

You can join the discussion on Intel's Impact assessment on Spectre/Meltdown performance hits on the OC3D Forums.

hellboy99
And what about Gens before Gen 6? AMD from now on with me and sooner rather than later, not looking forward to see what happens my i7 4790KQuote

AlienALX
I doubt any one will actually notice it, but it will be there (the deficit). However, one thing I do know is that Ryzen plus is going to look an awful lot better than it was about to. Especially if people bench it against new results after the Meltdown patch.

That is the one that really causes issues. And of course, AMD are not susceptible to that in any shape or form. That is the one that literally needs a new kernel to address the CPU in a completely different way. And it causes latency and other issues which is why there is degradation in certain things.

And if you were very conservative and said that overall you have lost around, say, 8% performance? then wow, every single last % of that can, and will, be exploited by Ryzen +.

In fact, it almost closes the deficit between Ryzen and Coffeelake to absolutely nothing. Instead of it being "sort of" on par with Broadwell E.Quote

Darkdayzzz
Quote:
Consumers will be fine honestly, not like anyone trying to use Spectre will be pursuing a normal everyday person...not like Spectre is even easy to attempt to use to nefarious purposes. The person or group would really have to know their stuff so I wouldn't even sweat it.

Yes that is silly logic and I know that but the point is - most normal everyday people will NEVER be targeted by cyber related attacks. Old people and the very young or the rich are who are targeted 99% of the time lol.Quote

barnsley
Quote:
People said that about the tools leaked from that NSA hack and that didn't end well, did it?

Someone will work out how to create a module that exploits it, charge x% of a bitcoin/litecoin/whatever and start selling it to people who distribute malware. As with everything IT Security related, its only a matter of time before something happens.Quote
Reply