Intel has revealed 34 new Gold/Platinum server CPUs, which will use the companies new Skylake-SP "Purley" Platform and come with up to 28 cores.
It is expected that the flagship CPU of this series, the Xeon Platinum 8180, will offer 28-cores and 56-theads threads at 2.5GHz and a TDP of 205W.
The table below shows that these CPUs use H0 stepping, which suggests that these CPUs have been in development for a long time, though this is unsurprising given the new features that are available on these new CPUs. Skylake EP will offer support for AVX-512 instructions and offer support for 6-channel memory.
Memory-wise Skylake-EP will support 6-channel memory with up to 3-DIMMS per channel, allowing this platform to support up to 18-DIMMS per CPU. 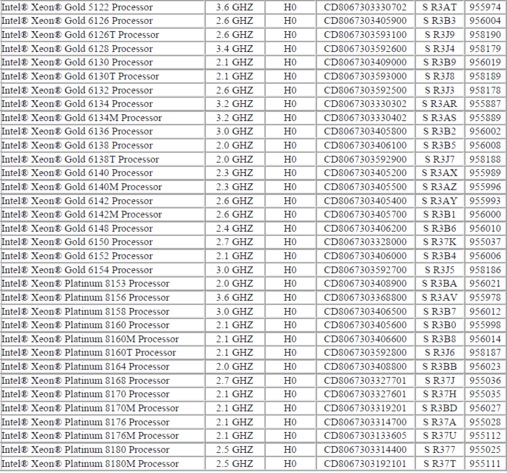 It is expected that Intel also plans to release Bronze and Silver series Xeon CPUs, which will come as part of Intel's Skylake-X platform on their LGA 2066 socket. These CPUs are expected to come with lower core counts and potentially lack some of the advanced features contained in their higher-end Gold and Platinum series CPUs.

Skylake-SP will use a different CPU socket than Skylake-X, which will allow it to support larger CPUs with higher TDPs as well as more memory channels and DIMMs. The Skylake-SP socket is not expected to ever have a consumer variant.

You can join the discussion on Intel's new Gold and Platinum series Xeon CPUs on the OC3D Forums.

Dicehunter
Intel need to put the massive bag of weed down, 34 CPU's is excessive.Quote

AlienALX
Quote:
In server land you need as many cores as you can possibly get because Intel encourage it. As such the software usually works with it well.

Unlike the desktop market, where £200+ for four cores keeps them in champagne and caviar.Quote

AlienALX
FFS. Sorry Dice, thought you were speaking about cores.

Yeah it's daft that. Very daft considering AMD will probably release three that will cover the entire market section. Intel may not be smoking weed but they're certainly portioning it out

NeverBackDown
28 cores and a 205watt tdp? AMD using 32 cores and the rumored tdp was what, 180watts a while back? Pretty impressive.Quote
Reply