So let's get the record straight here. Someone broke the embargo on Intel's Cascade Lake X series. This information was due to be released on October 7th at 6 AM Pacific Time, but somebody blabbed early. Intel responded by moving the embargo date forward. We were not informed of this until after other sites published.

Anyway, Cascade Lake-X will be Intel's next offering for the company's X299 platform, replacing the company's Skylake-X 7000 and 9000 series products. While the platform still supports a maximum core count of 18, this release is more than a mere refresh. Cascade Lake-X is new silicon, but don't expect the architecture itself to be revolutionary in typical PC workloads.

The main point that needs to be hammered home with this release is that Intel's pricing has seen a dramatic shift with Cascade Lake-X. Now, 18-core offering costs less than their last-generation 10-core model, delivering 80% more cores for less money. Intel is offering a lot more value with X299 this generation, which is a huge step in the right direction from a consumer's standpoint.

When compared to the 18-core i9-9980XE, Intel's new i9-10980XE will cost $1000 less while offering higher turbo boost frequencies and new, in-silicon, mitigations for side-channel attacks. While this generation won't offer an insane performance leap over its predecessors, the value for money of Intel's X299 platform has skyrocketed.

While this price change is significant, we must note that AMD plans to release a 16-core processor called the Ryzen 9 3950X in November for $749. With this in mind, it is easy to see why Intel has made such drastic price cuts to X299. 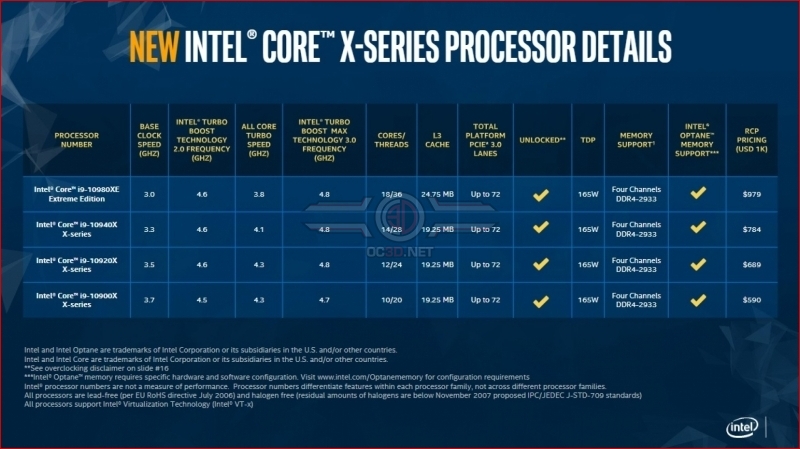 With Cascade Lake-X, Intel has also upped their support for both memory speeds and capacities, supporting 2933Mhz memory, in 1 DIMM per channel configs, from 2666MHz and from 128GB maximum to 256GB maximum per socket. The CPUs also support 48 PCIe lanes instead of 44, though these lanes are still PCIe 3.0.

Intel has also dropped their 16-core X299 CPU from their product stack, believing that there is no place for it within Intel's new pricing model. This move also prevents direct comparisons to AMD's Ryzen 9 3950X. Intel's sub-10-core X299 models have also been discontinued, which makes sense given how 8-core CPUs are now relatively common on consumer-grade CPU sockets.

2.5Gb Ethernet and WiFi 6 support have also been listed for their new Cascade Lake-X processors. To be clear, these features will come with new X299 motherboards, not via the CPU directly. These are external motherboard features that are practically nothing to do with the CPU. COnfusing marketing, but at least this means that there will be new X299 motherboards with a revamped feature set.

One of Cascade Lake's major architectural changes over Skylake-X is the addition of "Deep Learning Boost", which can be used to accelerate specific workloads. At this time, it is unknown how many applications will benefit from this feature. Another noteworthy change is that Turbo Boost 3.0 can now be applied to up to four cores, a move which will help grant users additional performance in some workloads. 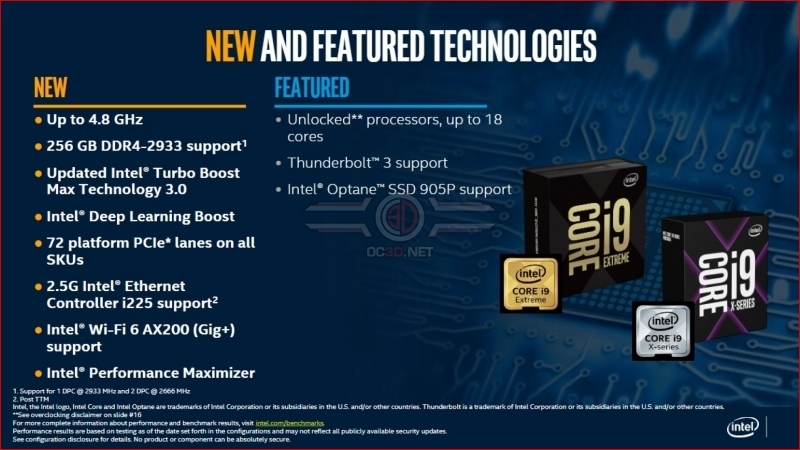 Cascade Lake-X represents a huge shift from Intel, moving the company to a more consumer-friendly position by offering more competitive pricing and value for money. Even so, this move is necessary given the release of AMD's Ryzen 3rd Generation processors and the upcoming release of 3rd Generation Threadripper processors, which promise to launch with 24 core models next month.

You can join the discussion on Intel's Cascade Lake-X series processors on the OC3D Forums.

23RO_UK
So, Intel go from "We are supreme, the clueless consumer will accept paying through the nose" to "Oh sh*t, they're buying AMD, hit the panic button".

Comedy at it's finest.

(they can still poke it lol)Quote

smilertoo
If AMD still offers better bang for the buck it wil show just how bad Intels price gougeing has been for the last decade,Quote

i must say i pity those who have not noticed that without AMD´s help.

i was an intel only user for nearly a decade. but i always knew i was ripped off.
but as i need fast systems for my job i had no other choice.


good products help to make a buck... but selling stuff way overpriced sure helps a lot.Quote

demonking
Quote:
This is not a general consumer platform though, unlike the 3950X which is on the X570. We should be comparing these to current Thread rippers as that is the opposite platform. It would be like AMD comparing there RX cards to Quadro's.


Quote:
This!
it is capitalism at its purest. If theres no competition, charge what you like. I too moved to Intel (only once and im still on Ivy) as their Core series was so much better than Phenom. The good thing is that I've not had to upgrade since then. Intel has had no competition since Phenom and even that wasn't on par. All you need to do is look at the price difference between a 3770 and a 9700, there is no way in hell that production costs have increased by the amount the prices have increased since then, Im not even doing a fair comparison the 3770 was the top of the range on a new process node, 9700 is not top of the range and is on a node that was outdated 2 generations ago. If intel had their fabs sorted, these 14nm processors should be costing pittance compared to the initial 14nm wafersQuote

WYP
Quote:
It ultimately depends on what you are looking at. Pure core count, the Ryzen 9 3950X is a worthy thing to compare Cascade Lake-X with. When it comes to I/O, yeah, TR4 is a more valid comparison.

As always, there are several angles that this could be looked at from. That said, AMD offering 16 cores for $750 has a huge part to play in this, and what AMD's Zen 2's designs mean for Threadripper.

We already know that a 24 core Threadripper is coming, and can see how well AMD's new multi-die architecture works on EPYC and Ryzen. Apply that to Threadripper, and weak use cases for old Threadripper will become strong points for the new parts, especially on the parts with more than 16 cores.

As far as Intel's margins go, they are making a huge cut here. That said, 14nm is sure to be a lot cheaper to produce these days, especially for large dies, which will certainly help.Quote
Reply