There's an 'Intel prices are Ryzen' joke in here somewhere...

In Intel's Q2 2018 financial report, the company stated that their "biggest challenge" in the second half of this year would be meeting the growing demand of their customers, which in simple terms means that the company is unable to supply enough processors to their customers, creating a supply shortage.

There are several reasons behind this shortage, one of which is growing customer demand, though this is only part of the story. Intel's' long delays of 10nm are another factor, as if the new node was ready on time Intel would be sharing their manufacturing workloads across both 14nm and 10nm, giving them access to a larger pool of manufacturing resources.

On top of that, Intel's latest 300-series chipsets are now built on 14nm, instead of 22nm, placing increased strain on Intel's already saturated 14nm manufacturing capacity. Intel's chipsets are typically created on an older node than their processors to prevent this from happening, but delays to 10nm have placed Intel's CPU node transition plans years outside of the company's original schedule.

While having their 14nm foundries running at peak capacity is a great thing on paper, it is a problem when Intel's maximised productivity cannot meet the demands of their customers/clients, especially when the market has a revitalised AMD that is ready to take market share wherever they can.

Our biggest challenge in the second half [of 2018] will be meeting additional demand, and we are working intently with our customers and our factories to be prepared so we are not constraining our customers' growth.

Supply shortfalls result in increased pricing, which is something that Tom's Hardware has spotted on PCPartPicker with Intel's 14nm products. Here, the i5-8400 acts as a prime example, with its price increasing from around $180 to approximately $200 between May/June and August/September. 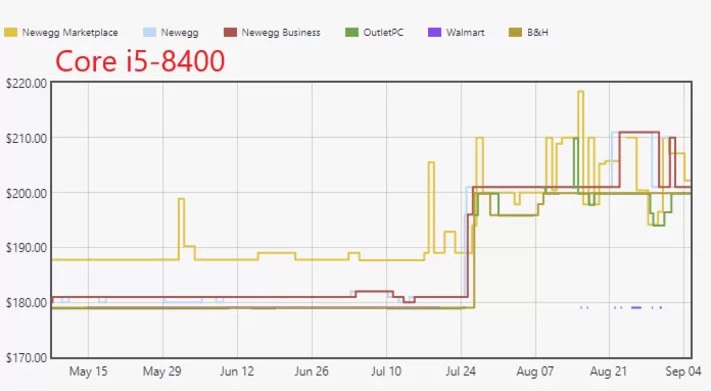 (Image from PCPartPicker - Via Tom's Hardware)

This situation is bad for consumers, as Intel's manufacturing shortcomings are hitting them directly in the pockets. On the AMD side, this shortcoming is great news, as these price increases will make their Ryzen processors seem more attractive to custom PC builders an OEMs alike.

Intel typically prioritises high-volume customers when supply constrained, hoping to prevent their big-money clients from moving towards their competitors. AMD latest Ryzen processors have placed them into a situation where they can offer strong competition for Intel, making now the ideal time for the company to increase their market share within the OEM market. Intel's shortcomings will result in AMD's gain.

You can join the discussion on Intel's 14nm shortages and increasing CPU prices on the OC3D Forums.

reactor_au
Good for AMD, maybe not so good for the consumer (at least not immediately), definitely no good for IntelQuote

NeverBackDown
Well when all you can make is 14nm yeah it's logical for this to happen.Quote
Reply