Intel's 14th Generation Meteor Lake processors have been powered on

Intel has powered on their next-next-generation processor

Things are changed over at Intel. For years, Intel had been stuck on its 14nm lithography node, but now the company is moving forward with new CPU architectures, process technologies, and packaging techniques. Today, Intel has three levers that the company can use to make their future products more competitive, and during their Q1 2022 earnings call, they confirmed that they have already powered on and tested their planned 14th generation processors.

Later this year, Intel plans to launch their 13th generation Raptor Lake processors, utilising their Intel 7 node once again. In 2023, Intel plans to launch new processors using their Intel 4 lithography node and disaggregated design. What does disaggregated mean? Starting with their 14th generation products, Intel will be creating CPUs that are built using multiple chips across multiple lithography nodes.

In the quote below, Intel's CEO< Pat Gelsinger, confirmed Intel's plan to ship five new lithography technologies within the next four years. Intel wants to bring itself back into the leading edge lithography market, and so far things are looking positive for the chipmaker.

We continue to make great progress on our plans to deliver 5 process nodes in 4 years. Intel 7 is ramping extremely well with Alder Lake and on Intel 4, Meteor Lake has now successfully booted Windows 11 and Linux. The speed at which the team was able to achieve this milestone is a significant sign of the health of both Meteor Lake and our Intel 4 process technology.

With Meteor Lake, Intel will be creating a processor with separate CPU tiles and graphics tiles. Aside from that, Meteor Lake will also feature separate SOC and I/O tiles, all of which are connected using Intel's latest packaging technologies. Intel wants to create multi-tile (multi-chip) processors that can perform like monolithic silicon. With these techniques, Intel hopes to create processors that are more cost effective, and more performant. Beyond that, Meteor Lake is designed to scale from 5W to 125W, making the processor suitable for a huge range of devices.

The strength of our client road map continues with Raptor Lake, where we are shipping both desktop and mobile samples to our customers today, and we plan to follow that with Meteor Lake in 2023. 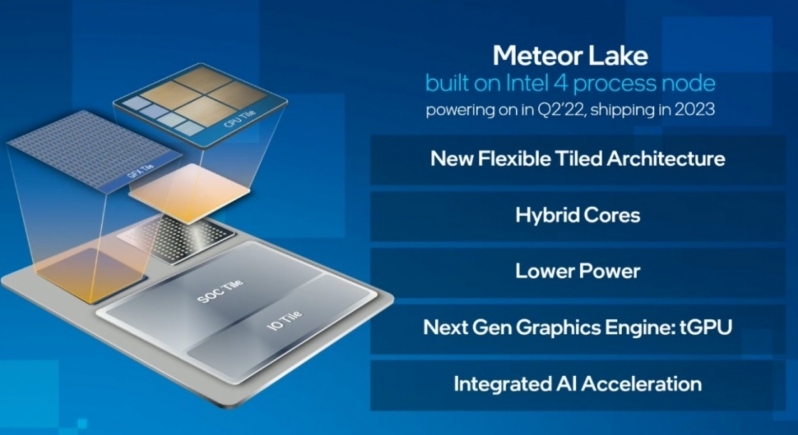 Right now, it looks like Intel will be able to launch Meteor Lake series processor in 2023, as planned. Right now, Intel is releasing new processor generations on a yearly cadence. Intel is rapidly releasing new processors and rapidly improving their process technologies and core architectures. Intel has started what appears to be an upward swing, though it remains to be seen whether or not the company will continue executing their hardware roadmap as planned.

You can join the discussion on Intel powering on their 14th Generation Meteor Lake processors on the OC3D Forums.