Several reports have started to circulate regarding the design and overclockability of Intel's upcoming 8-core Coffee Lake-S series processors, with sites like Golem.de claiming that Intel's 8-core flagship products will be soldered.

Higher core clock speeds and core counts mean one thing; higher thermals loads, especially while overclocking. The move to eight cores seems to have made Intel concerned about thermals, which combined with the soldered nature of AMD's competing Ryzen processors gives the company more than enough reason to start using solder again on their high-end SKUs.

On mainstream CPU sockets, Intel has not released a soldered processor since the release of their Sandy Bridge architecture, instead, using a inferior thermal compound as a thermal interface material on Ivy Bridge or newer architectures. This change lowers the cost of Intel's bill of materials and removes the risks involved with CPU soldering, something with Intel deemed worth the thermal consequences, given the feature's lack of usefulness to most end users outside of overclocking.

At this time, Intel has not confirmed whether or not their upcoming i7 9700K or i9 9900K are soldered, though the move would be hugely beneficial for users of these high-end SKUs.

Intel's use of unsoldered processors has been a common complaint amongst enthusiasts for several years, creating a micro-industry within the PC market where users develop tools and thermal interface materials that are designed to offer better thermal results by replacing Intel's stock thermal solution. 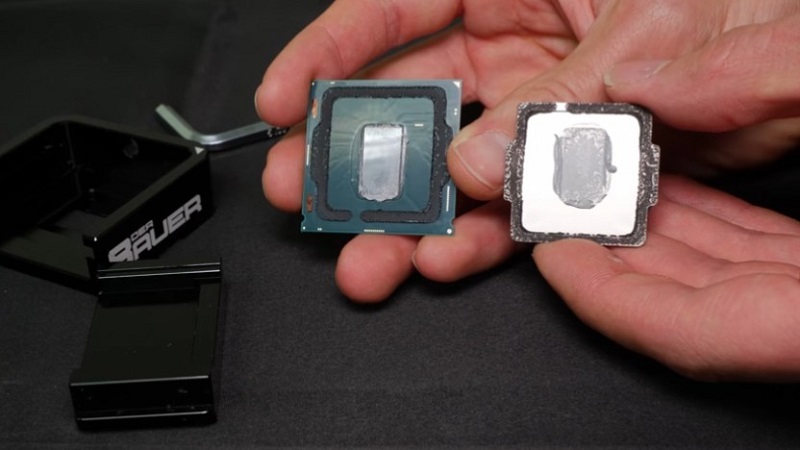 If Intel solders their upcoming 8-core i7 and i9 series processors, it seems unlikely that Intel will do the same with their 6-core or lower counterparts, as these SKUs are merely refreshes of the company's existing Coffee Lake offerings. Intel is unlikely to change the manufacturing process of chips that are, pretty much, already in production, making the change from 8th gen - 9th gen likely to be a mere clock speed bump and nothing more for i5 or lower SKUs.

A move back to soldered processors would be a hugely positive move for Intel, at least for the enthusiast community, who desire lower thermals and higher overclocking headroom. Silence freaks will also benefit from the change, as lower thermals will allow users to run their system fans slower, making PCs quieter in the process.

Special Thanks to FTLN for finding us this information.

Warchild
I bet they will use this as a reason to bump up the cost drastically.Quote

AlienALX
Quote:
Yup. When you use things that you really should be doing as a way to sell things.Quote

tolagarf
All K and X models should be soldered if possibly. I really feel Intel slowly dug their own grave by not doing it, when they couldQuote

Gothmoth
i believe it when i see it.


some 9 series CPU´s are soldered and others not.... not sure if that makes sense.
would it really that more expensive to solder all 9 series CPU´s??Quote

Warchild
Quote:
Not necessarily. While we do prefer it, Soldered die does have the potential for issues later on down the line. Thermal cycling etc.

With old CPU the PCB was thicker and had more strength, but since skylake, the rigity of the pcb was less. Obviously its not a valid excuse for Intel and they did go completely cheap but I think there is more to it then many of us understand. They are perfectly capable of it, but unless they can make 100% profit on sales, they won't do it.

Soldered on die brings extra cost. If they could lay that cost on us via a cost+ model, and we would still pay then sure, but if they had to normalise sales (taking in inflation) it means the solder extra expense would cut into their revenue, which is a no no for them.

AMD on the other hand just go for it.Quote
Reply