What is a CPU's cache?

In modern processors, caches are used to store data on-chip, allowing important information to be accessed quickly and with incredibly high amounts of bandwidth. External memory sourced like DRAM (or storage) take a long time to access, with on-chip caches taking much less time to access.

Storing important data in caches lowers a processor's idle time by lowering the amount of time that a processor needs to wait before data reaches it. This is how caches are used to boost CPU performance. Beyond that, modern CPUs use several levels of cache to deliver even lower latencies for some data.

There are two ways to improve a CPU's caches, the first is by lowering its latencies (allowing CPUs to access its data faster) and the second is by enlarging its caches without incurring a latency penalty (allowing more data to be stored without inducing longer response times).

What about Raptor Lake?

According to a leaker known as OneRaichu, Intel Raptor Lake processors will reportedly offer users up to 68 MB of total L2 and L3 cache, more than double the 30 MB of L2/L3 cache offered on today's Alder Lake processors. Some of these increases come thanks to Raptor Lake's increased CPU core count, as Raptor Lake reportedly features sixteen E-Cores (as we reported in December 2021), with the rest coming from increase per-core cache amounts.

AMD has demonstrated since the launch of their Ryzen series processors that adding more cache and decreasing their cache latencies can significantly boost the performance of their CPUs, especially during gaming workloads. AMD's Zen+ architecture delivered moderate IPC boosts with lower cache latencies over Zen, and both Zen 2 and Zen 3 offered users significant boosts to game performance by offering larger L3 cache capacities. Beyond that, AMD's Ryzen 7 5800 X3D promises even more gaming performance thanks to its inclusion of 3D V-Cache. 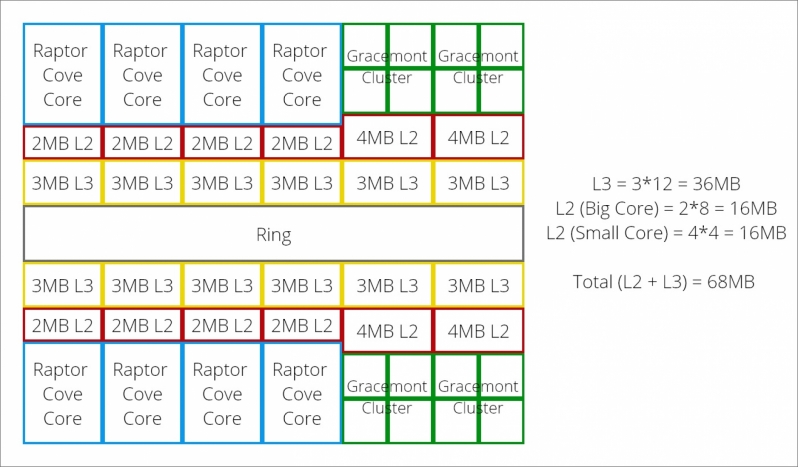 If Raptor Lake includes these rumoured cache size increases, Intel's 13th generation processors should offer gamers a significant performance advantage over their predecessors. Cache performance is of huge importance during gaming workloads, and Intel knows that they can use this to develop much stronger gaming processors.

AMD's Zen 4 processors are also due to feature larger L2 caches, with leaked benchmarks from engineering samples highlighting 1024 KB L2 caches (as we reported earlier this month). Zen 4's L2 caches are reportedly 2x larger than Zen 3's L2 caches, making this change a major architectural improvement from AMD. At this time, we do not know how large Zen 4's L3 caches will be on their high-end SKUs.

You can join the discussion on Raptor Lake's improved cache structure on the OC3D Forums.