Here's what you need to know about Intel's 13th generation products

A full SKU chart for Intel's 13th Generation Raptor Lake CPU lineup has leaked though Igor's Lab, confirming that Intel plans to release processors that will feature up to 24 cores and a maximum turbo power of 253 watts.

Like their existing Alder Lake series processors, Intel's Raptor Lake CPUs will support both DDR4 and DDR5 memory. Intel's upcoming processors will officially support DDR4-3000 memory and DDR5-5200 memory, though higher speeds will be achievable though overclocking. So far, specifications for six Raptor Lake series processors have leaked, including their i9-13900K, i7-13700K, i5-13600K (which all include Intel UHD 770 graphics), and their iGPU-less i9-13900KF, i7-13700KF, and their i5-13600KF. 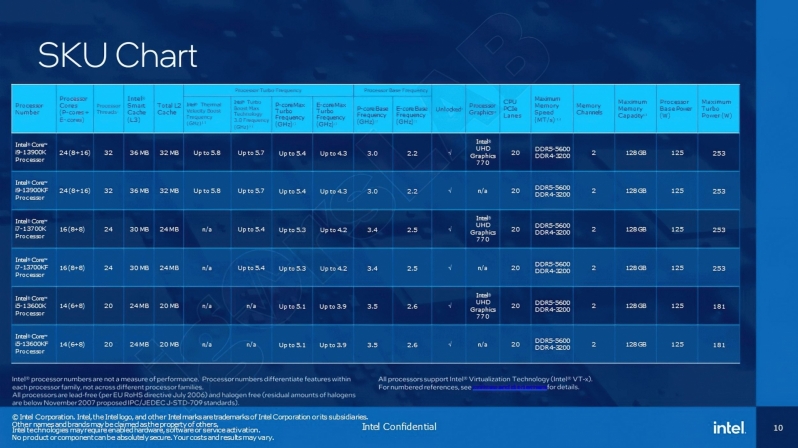 Raptor Lake will not support Intel's AVX-512 instructions, a feature that was removed from Intel's desktop CPU lineup with Alder Lake after it was added with their 11th Generation Rocket Lake processors. 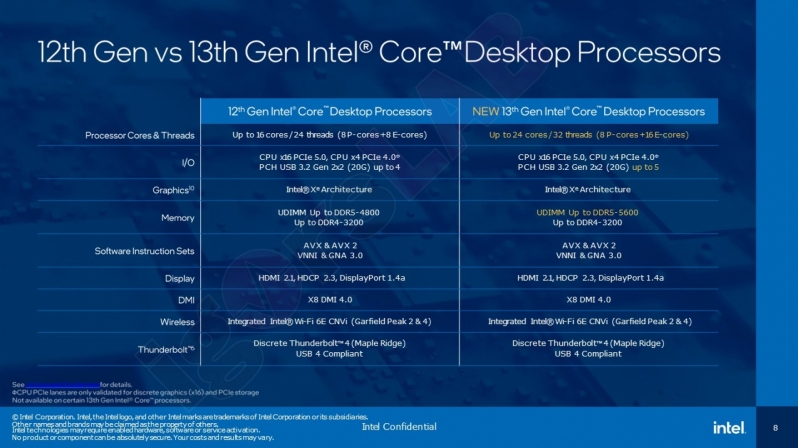 With Intel's Z790 series of motherboards, Intel has not added support for any additional PCIe 5.0 lanes to their motherboard lineup. That means that most Z790 series motherboards may not support PCIe 5.0 M.2 SSDs. With Z790, Intel has decreased the number of PCIe 3.0 lanes that they support and has replaced them with faster PCIe 4.0 lanes. This change allows Intel's latest motherboards to support more PCIe 4.0 devices than before.

With support for only 16 PCIE 5.0 lanes, Intel's Z790 motherboards will only support PCIe 5.0 on their motherboard's primary PCIe 16x connector. In contrast, AMD's X670E motherboards should support both PCIe 5.0 M.2 slots and PCIe 5.0 GPU connections. This should place Intel in a difficult position once PCIe 5.0 SSDs become available. 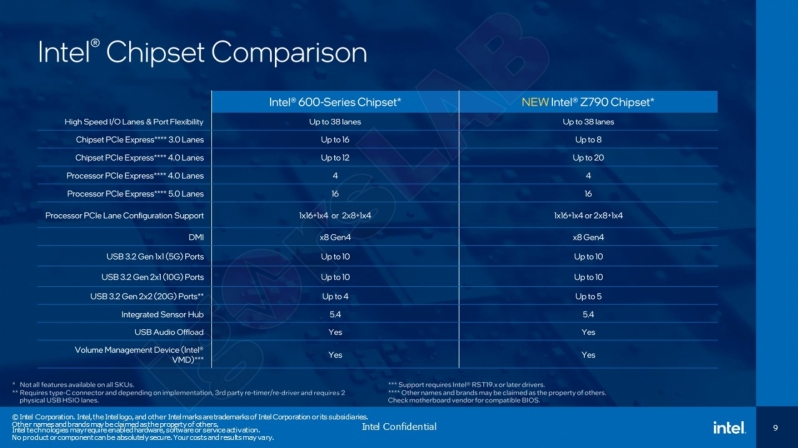 You can join the discussion on Intel's Z790 Raptor Lake CPU leaks on the OC3D Forums.

Gothmoth
the better PCI 5.0 support from AMD, in addition with intel your basically buying a mainboard that is end of life already, makes AMD way more attractive (imo).


you may pay a bit more upfront, but i am happy i switched to AMD in 2017 after more than a decade of intel systems.


i still use a crosshair hero 6 with the latest ryzen 5000 generation.Quote
Reply