Intel's delivering more value to the CPU market, showcasing the value of competition

At CES 2022, Intel's bringing some major changes to the lower-end of their CPU lineup, offering PC builders new stock CPU coolers, new high value CPU offerings, and stronger gaming performance than ever before. Alder Lake is getting a range of new SKUs, and today we can finally talk about them in an official capacity.

With LGA1700, Intel needed to create new stock heatsinks. LGA1700 is too larger for Intel's older reference heatsink designs, and increase of simply enlarging their classic designs, Intel has decided to create heatsinks that are both more performant and more stylised than their predecessors. As such, their new heatsink designs enable cooler operating temperatures than older Intel heatsinks and a much better aesthetic.

These new heatsinks are part of Intel's new Laminar series, with the RH1 covering Intel's i9 65W lineup, the RM1 covering their i3,15, and i7 ranges and their RSI that covers their lower-end Pentium and Celeron lines.

With these new heatsinks, Intel is bringing to consumers coolers that are quieter than their older stock heatsinks, making these heatsinks a great value add-on for Intel. With these coolers, PC builders don't need to purchase an aftermarket heatsink to deliver decent thermals under sustained loads. This is good news for both OEMs and PC builders alike. 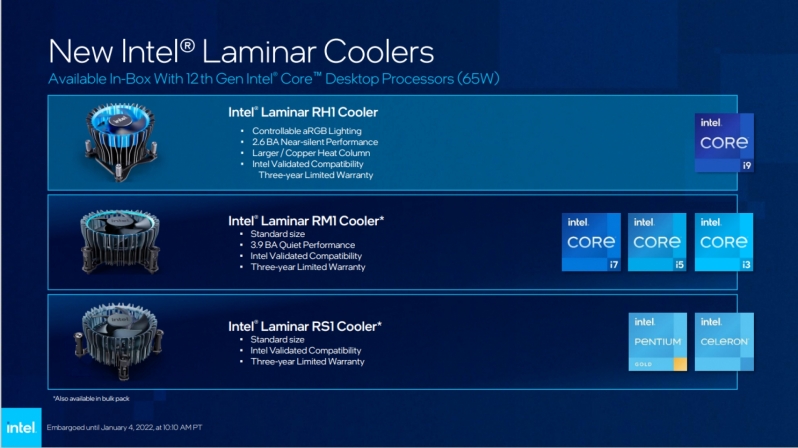 Below, we have the specifications and pricing for Intel's new non-K series 12th generation CPU lineup. Like their higher-end counterparts, these CPUs support both DDR4 and DDR5 memory with many models that have F-series GPU-less counterparts.

These new CPUs lack overclocking support, but thanks to their lower pricing, these CPUs offer PC builders excellent value. This is especially true for Intel's i5-12400F, which offers users six P-Cores and twelve threads. Not bad given its RCP pricing of $167.

With these new processors, Intel is hitting AMD hard by delivering what we expect to be higher performance levels within the sub-$250 CPU market. Combine this with Intel's new lower-cost 600-series motherboard chipsets, and Intel's onto a winner with Alder Lake.

With Intel's i5 and lower non-K series SKUs, Intel's 12th generation CPU lineup only contains Alder Lake's high performance P-Cores. This is good news for consumers, as Intel's P-Cores are stronger than their lower-power E-core counterparts.

Intel's i5 models all feature six P-cores and Intel's i3 models all feature four P-cores. While these core counts are the same as Intel's 11th Gen core desktop processors, the architectural benefits of Intel's Golden Cove P-cores deliver PC builders a strong generational leap in performance over their predecessors. 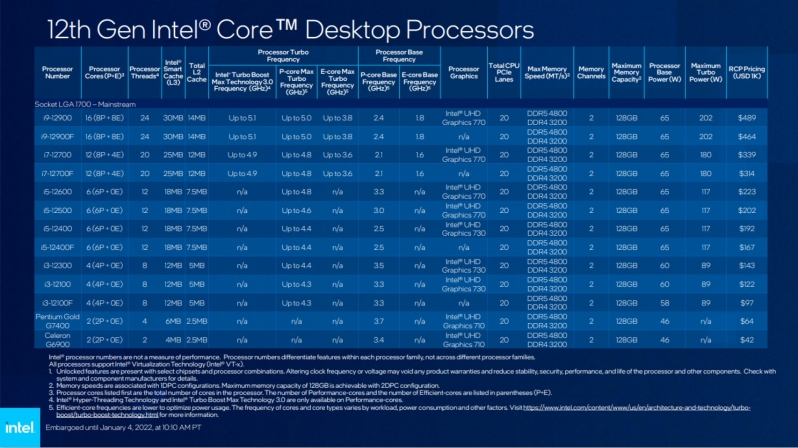 For those who require less power hungry processors, Intel has revealed new 35W Alder Lake SKUs that can operate at significantly lower power levels while maintaining the high core counts of their non-T-series counterparts.

These CPUs support all of the same features as their higher power counterparts, with the only difference between these SKUs being their power usage and clock speeds. T-series CPUs are designed for compact systems with tighter thermal requirements. 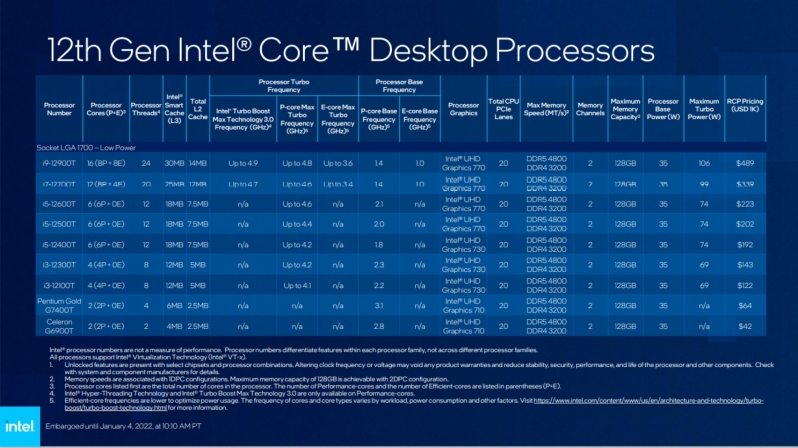 With their new Alder Lake series SKUs, Intel's planning to deliver incredible value to consumers by delivering stellar productivity performance and better value for money than competing CPUs AMD. That said, AMD's CES keynote is today, and AMD is expected to reveal new processors for several areas of the PC market.

While Intel is claiming to beat AMD's current processors, it is likely that Intel will be competing with a new set of Ryzen processors by the time their new Alder Lake CPUs hit store shelves. Even so, the fact that Intel and AMD are reacting to each other like this showcases how tight competition within the CPU market is becoming. 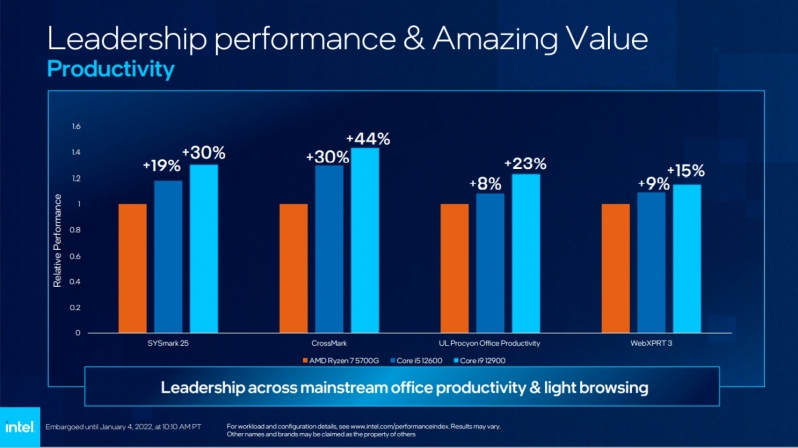 When compared to AMD's Ryzen 7 5700G, Intel's latest Alder Lake processors can deliver significant performance advantages in content creation workloads. That said, Intel's lack of inclusion of AMD X-series CPUs highlights the fact that Intel is cherry picking data. That said, Intel's i5-12600 should be less expensive than AMD's Ryzen 7 5700G, making this comparison a valid one. 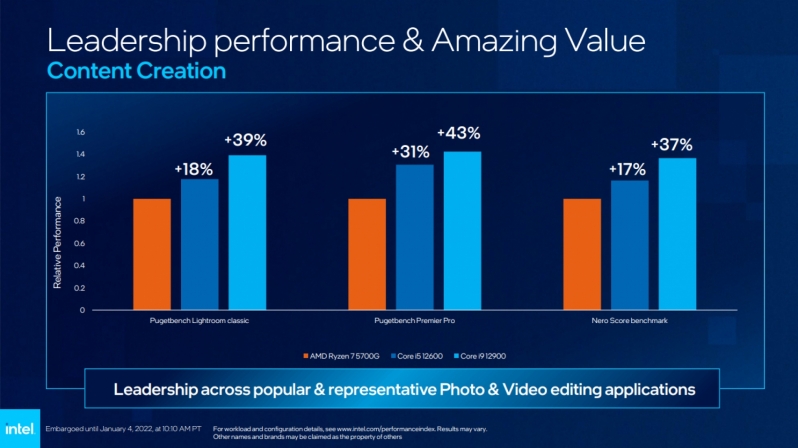 When compared to their older 11th generation SKUs, Intel can offer higher core counts in their i7 and i9 ranges and stronger cores within all areas of their 12th generation desktop lineup. With these improvements, Intel has delivered a huge performance leap over their last-generation product offerings. 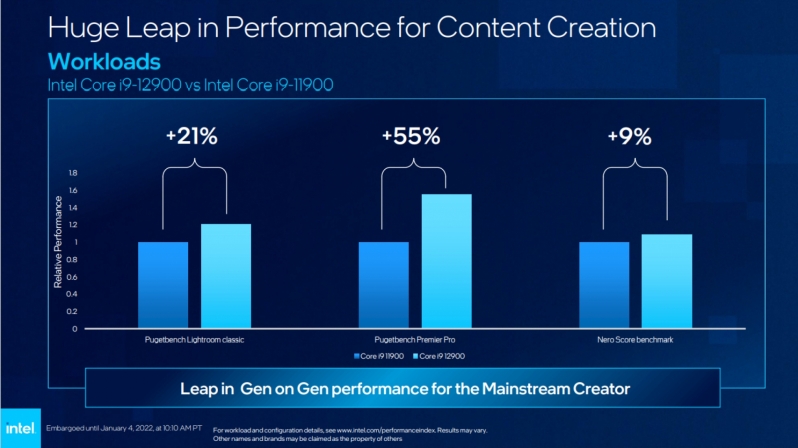 With their new 12th generation CPU SKUs, Intel has delivered strong performance gains for gamers. These gains come from Intel's enhanced P-cores and Alder Lake's reworked cache structure. Alongside other changes, Intel has reported performance gains of between 6 and 21% when moving from their i9-11900 to their i9-12900. For FPS-focused gamers, these gains are significant. 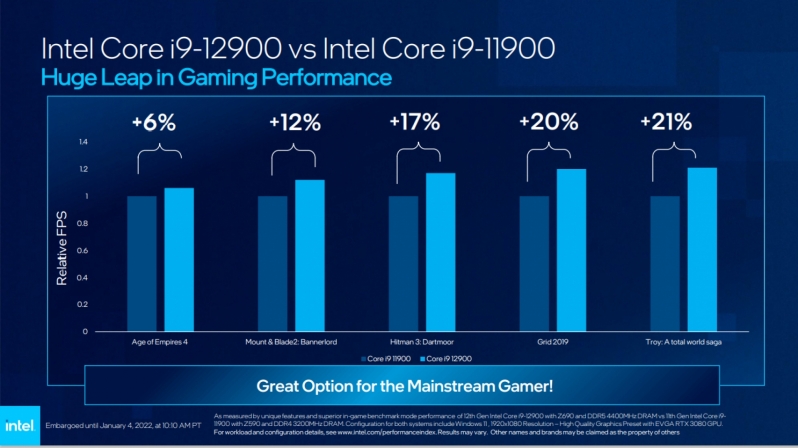 This new chipsets will allow motherboard manufacturers to create a wider range of Alder Lake supporting motherboards that reach a broad range of price points and feature sets. This will allow PC builders to purchase more affordable 600-series motherboards, and buy products that feature the features they need. Wi-Fi 6E will be supported by all of these new motherboard chipsets.

You can join the discussion on Intel's newest Alder Lake desktop CPUs and motherboard chipsets on the OC3D Forums. 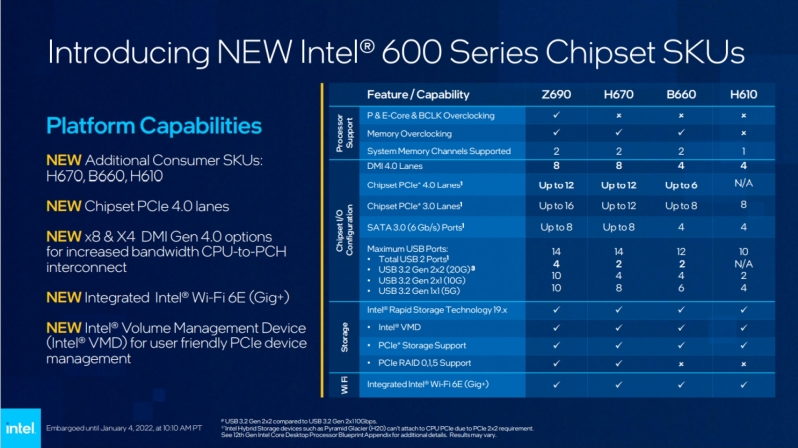 AlienALX
Prices have gone up. Friend of mine was going to get a 12700KF. Then he started moaning about prices, and I realised it had gone up £15.

Kinda strange that they would gouge a month after release, but I suppose with Intel being in the naughty book they were waiting to make sure they could get away with it.

Shame, as it kinda turns all of the value awards it got on its head /roll eyes.Quote
Reply