Intel plans to release its i9-10900K processor later this month, and it is due to deliver the highest clock speeds in Intel's history, reaching a maximum turbo of 5.3GHz under Thermal Velocity Boost.

If your workloads are primarily limited by single-threaded performance, this could make the i9-10900K the processor for you, provided you can keep it cool enough for Thermal Velocity Boost to activate. Unfortunately, these clock speeds will come with high levels of power consumption and the need for a lot of heat dissipation.

Videocardz has reported on some leaked overclocked benchmarks for Intel's i9-10900K, showcasing a Cinebench R15 score of over 3000 with a 5.4GHz i9-10900K. That's a high overclock, especially when compared to Intel's i9-9900K, which could see most models overclock to 5GHz on all cores.

This 5.4GHz clock speed was achieved on an ASRock Phantom Gaming Z490 motherboard with G.Skill 3200MHz DRAM and a CPU voltage of 1.35V. 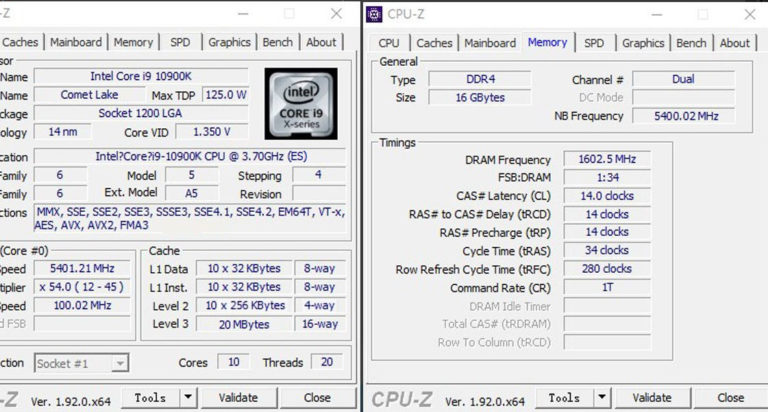 For context, our Ryzen 9 3900X processor was able to achieve a Cinebench R15 score of 3184 in our launch day review, giving Intel a remarkably close result, especially given the fact that Intel's i9-10900K has two fewer CPU cores.

What remains unknown if how overclockable the average i9-10900K is, and how much cooling is required to sustain 5GHz+ clock speeds on Intel's i9-10900K. Regardless, if the average Comet Lake processor can reach 5+ GHz clock speeds, that will be a good result for Intel, even if the power consumption is insane. 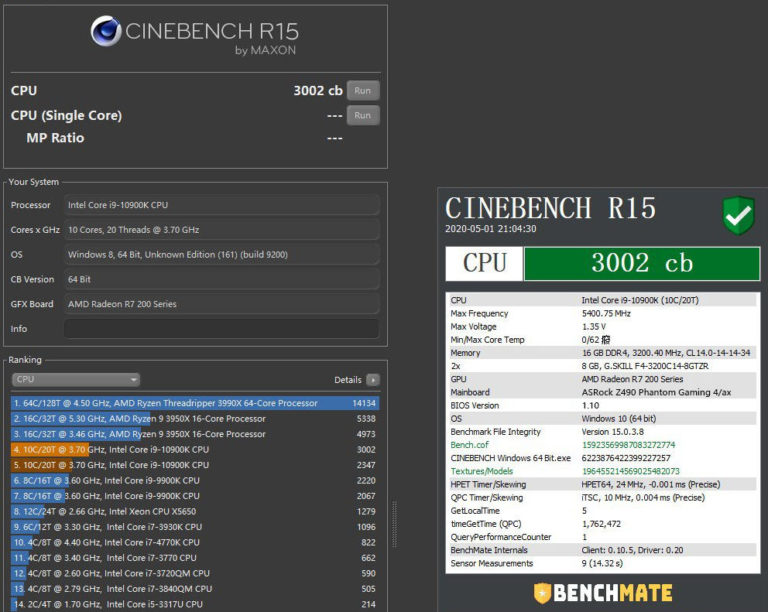 You can join the discussion on Intel's leaked 5.4GHz i9-10900K overclocking results on the OC3D Forums.

NeverBackDown
Probably crazy thermals too. Not to mention a robust motherboard VRM.Quote

23RO_UK
I've little doubt it will throttle in record time to and given the cost of motherboard VRM's capable of powering it without melting...

In case you hadn't noticed Intel, bragging rights to the highest clock speed don't mean squat unless they can maintain it for sustained periods of time and secondly give users noticeable quality of life improvements whilst not costing The Earth (the average consumer is kinda touchy about that especially so in the current human malware climate).

I could go on to say more but if I'm honest can't be arsed owing to your previous history of price gouging and BS PR etc etc etc.Quote

AlienALX
OK was I the only one to look close enough to spot it?

This is on the same exact node and process as the 9900k. And even top end binned expensive ones of those can only do 5.1.

So, this chip is either quite obviously under a chiller or LN2, or this whole thing is horse apples. I'm 50/50 split, but I know for a fact that a 14nm 10 core part with the whole shebang loaded at 5.475ghz would never EVER sustain 64c unless there was some wizardry going on.

Even more telling? look at the 3950x scores above it.

@5.3ghz. lmao, there is absolutely no way in heck that chip is on air or standard water.

Oh and if you look below it there is another 10900k score. And it's totally, utterly lame.

Just got this through from a guy in the industry who knows who did the leak.

Was done on chilled water. It was shown around his discord channels about a week and a half ago.


LOL, so my detective skills are totally bang on. So what else does this tell us? well, that 5.3 even on a HEDT water cooling loop is a pipe dream. There is absolutely no way on earth you will get that close if that is the best it can do under a chiller. In fact, I will stick my neck out and say that due to the extra cores and threads this chip won't maintain 5ghz and the 8 core will be better for gaming.Quote