Intel's i9 7980XE has been successfully overclocked to 6.1GHz on all 18 cores

Intel's i9 7980XE has been successfully overclocked to 6.1GHz on all 18 cores

Whenever Intel released a new flagship CPU, most consumers wonder exactly how far the company's premier product can be pushed. To say the least, the CPU is far outside of almost everyone's price range, making the mindboggling performance results from professional overclockers all the more appealing, showing the pinnacle of PC performance on modern desktop platforms.
der8auer, one of the world's most famous professional overclockers, has managed to overclock an Intel i9 7980XE all the way to 6.1GHz with LN2 cooling, with the CPU alone consuming over 1000 Watts of power while benchmarking.
To achieve this amazing feat the overclocker needed to use some unusual cooling methods while using Intel's 18-core behemoth, finding it necessary to cover the CPU die and most of the CPU's substrate with thermal paste to dissipate additional heat. Even under LN2 cooling, der8auer's 7980XE achieved temperatures that were above 0 degrees Celsius under load, an extremely warm temperature given the normal characteristics of LN2.

Using this CPU with a lighter 5.6GHz overclock der8auer achieved scores of 257 and 5635 in Cinebench R15 in its single threaded and multi-threaded tests respectively, easily surpassing any CPU that used traditional cooling methods. 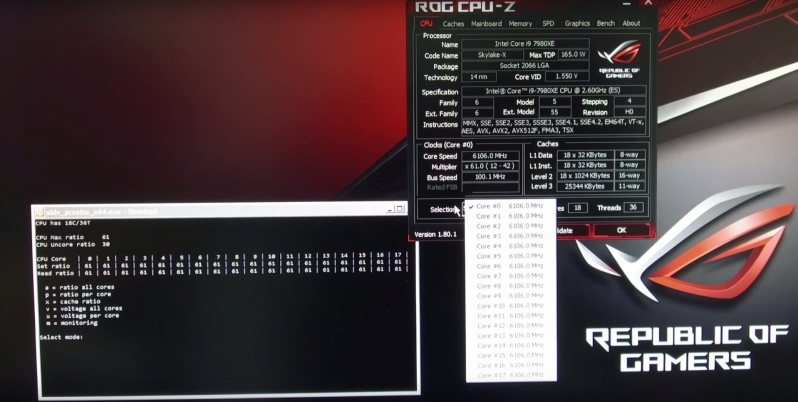 While not many consumers will even get close to overclocking with liquid nitrogen or even get their hands on a flagship CPU like this is is always interesting to see what happened when hardware enthusiasts push the limits of today's technology.

In the past 5GHz overclocks were world record setters and today they are reasonably common on overclockable Kaby Lake and Kaby Lake-X series CPUs, making us wonder how long it will be until 6GHz becomes common, or when CPU IPC enhancements allow these kinds of performance results be accessed by mainstream PC users. How long will it be until single-threaded Cinebench R15 scores of 250+ become common?

You can join the discussion on Intel's i9 7980XE being overclocked to 6.1GHz on the OC3D Forums.

Over 1kw is insane lolQuote

AngryGoldfish
the 7980XE reviews are actually quite impressive. We all knew it was going to be a beast, but it doesn't seem like shoehorned in product as much as I thought it would.Quote

Elooder
7980XE still is a somewhat shoehorned product. It is an actual Xeon CPU rebranded and tweaked (modified) to fit the HEDT market. Now, Xeon CPUs are well-known for their reliability which implies high quality, higher than any desktop CPU, with Intel employing additional testing and certification (which, among other factors, is the reason for them being as expensive as they are), making sure they are the best CPUs Intel has to offer. So, best silicon, more testing, higher quality all of which would easily translate into high overclockability which we see here but let's not ignore the fact it was pulling 1000W and heating LN2 to above 0 which means it's only the quality of the dies that is "holding the CPU together".
Also, let's not ignore the fact that the architecture in that CPU is less new than some previous generations of Intel CPUs which begs the questions - "Where were you Intel?" and "Why now?". Ah yes, competition. So, how long would it have been before we saw something like this had AMD not released a CPU which may not beat this in performance but surely does in features, price and hence - value. And you can have two AMD Threadrippers for the price of one 7980XE and two Threadrippers wipe the floor with the 7980XE in performance.
Heck, forget AMD, forget Threadripper. You can have two 18-core/36-thread Intel CPUs on ONE board, overclocked, for less than one 7980XE. That would wipe the floor with the 7980XE in performance as well.
So yes, 7980XE is a jerk reaction and Intel's fear of competition for which it's definitely "shoehorned".Quote

Kaapstad
I really find these LN2 articles a bit pointless as they mean very little.

Unless the end user can use a cooling solution 24/7 like custom water for example it means absolutely nothing.

Even if you could overclock a 7980XE to 50 ghz on LN2 it is totally pointless as the average end user will still only get around 4.4 to 4.6 on water.Quote

NeverBackDown
Quote:
I bet you're a buzz kill at a party going around explaining why alcohol is bad for people and that people at said party should stop drinking because it's not logical to poison your body.
You forget it's about having fun.
Kinda like this.

It's just for world records... Who cares about the average user? It's a world record! It's a fun hobby.

I'd also wager if they clocked this at 50ghz you'd be impressed.Quote
Reply