In 2023, Intel will be retiring their Celeron and Pentium branding

Today, Intel has announced that they will be retiring their Intel Pentium and Intel Celeron notebook branding in 2023, replacing these 30 year old brand names with simpler branding. From 2023, "Intel Processor" will be Intel's branding for the "essential" product space. To put things another way, future Celeron and Pentium grade systems will simply have Intel Inside.

Moving forward, Intel will be focusing more on their flagship Core, Evo, and vPro brands, and the retirement of Celeron and Pentium will allow consumers to simply look for systems that have "Intel Inside", rather than consider the small difference between Celeron and Pentium processors.

Below is what Intel's Josh Newman had to say about Intel's move away from Celeron and Pentium with their 2023 notebook processors.

Whether for work or play, the importance of the PC has only become more apparent as the torrid pace of technological development continues to shape the world. Intel is committed to driving innovation to benefit users, and our entry-level processor families have been crucial for raising the PC standard across all price points. The new Intel Processor branding will simplify our offerings so users can focus on choosing the right processor for their needs. 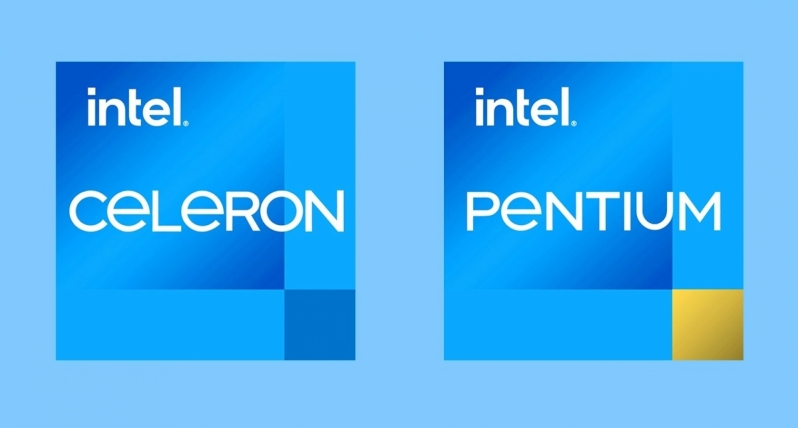 Intel introduced their Pentium brand back in 1993, with Pentium chips being the company's flagship brand for high-end desktop processors. Following the release of Intel's Core branding in 2006, the Pentium brand name became part of Intel's mid-range product tier, though as time has moved on both Pentium and Celeron processors have become increasingly low-end. Today, Intel's Pentium and Celeron brands are synonymous with low-end, low-cost processors, which are largely used in cheap Windows PCs and Chromebooks.

By eliminating both their Celeron and Pentium branding, Intel has simplified their low-end CPU lineup and moved both brands under the "Intel Processor" banner. Systems with these processors will simply be labelled as "Intel Inside", removing the negative associations that the low-end Pentium and Celeron brands have garnered.

You can join the discussion on Intel retiring their Celeron and Pentium brand names on the OC3D Forums.

ET3D
Quote:
Basically, it's an attempt to get people to buy low end hardware without realising it'd perform badly.

I'm not sure what the result of this will be. I can see this potentially going sour if people get to associate "Intel Inside" with low performance (what they previously associated with "Pentium" or "Celeron"), but on the other hand, putting "Intel" front and centre, instead of "Pentium" or "Celeron", should raise the Intel brand awareness.Quote
Reply