Intel's Raptor Lake i9-13900 has been previewed by SiSoftware

SiSoftware has managed to get a hold of Intel's 13th generation i9-13900 processor, a next-generation Raptor Lake processor that features support for faster DDR5 memory (DDR5-5600 native VS DDR5-4800 with Alder Lake), eight additional E-cores (16 vs 8 with Alder Lake), 20% more L3 cache (36MB VS 30MB), and larger L2 caches on both Intel's E-cores and P-cores. This data confirms a lot of previously leaked information about Intel's Raptor Lake product line.

With Raptor Lake, SiSoftware has confirmed that Intel's 13th generation processors will lack support for AVX-512 on both their P-cores and E-cores, a feature that will be present on all of AMD's Ryzen 7000 series processors. This turns what was traditionally an Intel advantage into a weakness, though it remains to be seen how well AMD's Ryzen 7000 series will perform in AVX-512 workloads.

In SiSoftware's Arithmetic tests, Intel's Raptor Lake i9-13900 receives a tremendous performance uplift when compared to its last-generation counterpart. 33%-100% performance gains are recorded, allowing Intel to overtake AMD's Zen 3 Ryzen 9 5900X in several key areas. That said, these performance gains do not apply to all workloads, and AMD's Ryzen 7000 series will push AMD's performance levels higher in these areas aswell. 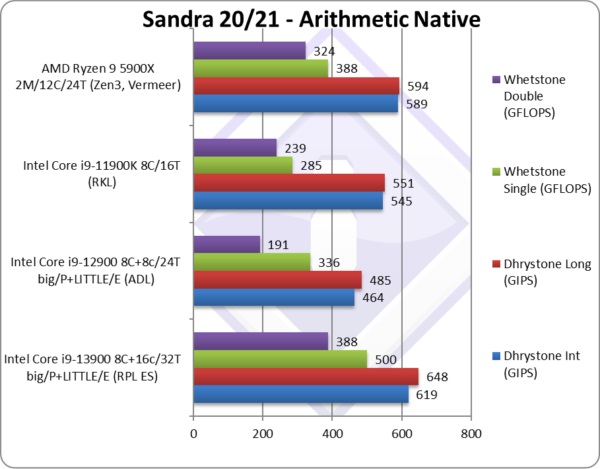 In heavily vectorised workloads, Intel's i9-13900 delivers less impressive performance gains, beating Alder Lake by 4-6% while losing to Intel's 11th generation i9-11900K in workloads where AVX512 has an impact. It's not a good look where Intel's two generations old i9 can beat its modern counterpart in some areas.

Despite its age, AMD's Ryzen 9 5900X is able to beat Intel's Raptor Lake i9-13900 by a decent margin in these workloads, and Zen 4 will likely improve AMD's position further. This is especially true after Zen 4's AVX512 support is considered. 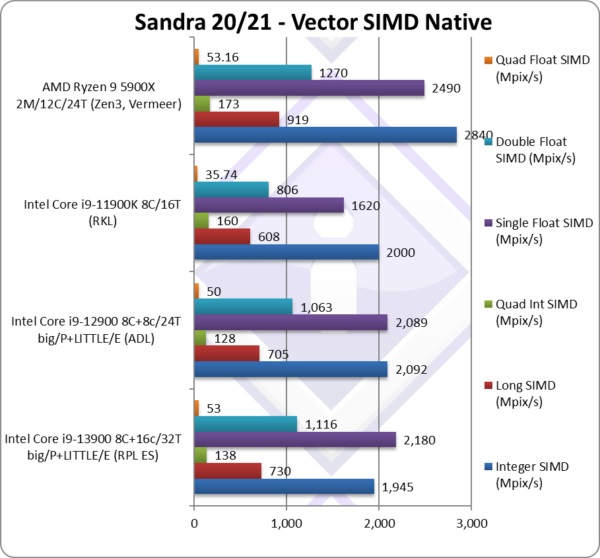 With Raptor Lake, Intel's performance gains this generation are a mixed bag. Some workloads benefit hugely from Raptor Lakes improvements while others see a relatively minor impact. Even so, it looks like Raptor Lake will make huge performance gains in popular benchmarks like Cinebench, which will secure Intel enough wins to make Raptor Lake appear as an attractive option for many consumers.

Now that AMD and Intel are competing fiercely within the CPU market, there is no longer a CPU manufacturer that offers a CPU that is the best CPU for all workloads. Whether Intel's CPUs or AMD's CPU are best for you will depend on a lot of factors, as CPU designs from AMD and Intel will be strong in different areas, making the "best processor" change depending on your exact workloads.

You can join the discussion on Intel's i9-13900 getting tested by SiSoftware on the OC3D Forums.