2022 has been an interesting year for the CPU market, with AMD launching their Ryzen 7000 series of AM5 processors while Intel launched their Raptor Lake series of LGA 1700 CPUs. Both of these new CPU generations delivered significant core clock speed increased and performance enhancements over their predecessors, and in 2023 things are expected to heat up further for the CPU market.

In 2023, Intel are expected to release their i9-13900KS processor, a CPU that is expected to boost to speeds of 6 GHz. On the AMD side, new Ryzen 7000X3D series processors are expected to launch, offering users 3D V-Cache to augment Zen 4's gaming performance.

According to ECSM, Intel also plans to release new "Raptor Lake Refresh" processors in 2023, offering Intel customers enhanced boost clock frequencies. ECSM has also stated that they have only seen evidence for six-core and 8-core V-Cache Enhanced Zen 4 processors, though more powerful 12-core and 16-core models could be in the works.

AMD are also reportedly working on new AM5-based APUs, processors that will feature up to eight CPU cores and a larger integrated graphics component than AMD's other Ryzen 7000 series processors. 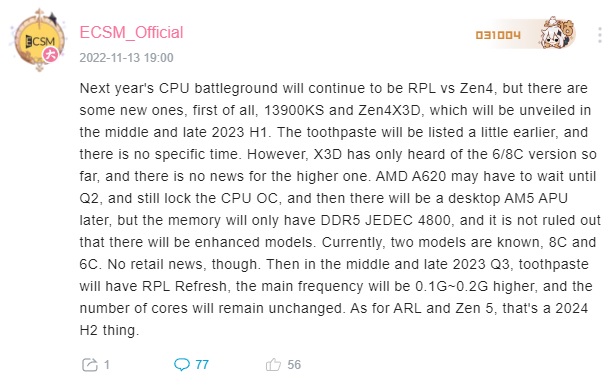 If ECSM is correct, AMD's Zen 5 processors and Intel's Meteor Lake series processors are both unlikely to release before 2024. Intel are also reportedly working on another CPU architecture called Arrow Lake, which will release alongside Meteor Lake for high-end Intel customers.

Both Zen 5 and Meteor/Arrow Lake are expected in the second half of 2024, which means that it will be a while before the PC industry moves away from Zen 4 and Raptor Lake.

You can join the discussion on Intel's rumoured Raptor Lake Refresh on the OC3D Forums.

Dicehunter
If it's just a Raptorlake refresh in 10'ish months time which will be slightly higher clocks, Same arch etc... I wonder if it will be compatible with the 600/700 series chipset or if Intel will put in place some artificial lockout.Quote

AngryGoldfish
Quote:
But who would upgrade from a 12000 or 13000 series chip to the Raptor Lake refresh?Quote