Intel may have regained single-threaded performance leadership, but Ryzen still has major advantages

With the launch of their Ryzen 5000 series, AMD moved from being an underdog to becoming the x86 CPU market leader, offering more cores and higher levels of single-threaded performance than Intel in many market segments. Intel was placed on the back foot, and drastic changes were needed to bring Intel's CPU lineup back into contention.

Intel's i7-11700K, a lower-performance 11th gen 8-core Rocket Lake processor, has already been listed with a single-threaded score of 3,548, signalling that the i9-11900K offers users a 6% single-threaded performance boost. Assuming that both processors have clock speeds that boost to around 5GHz, this score difference implies that the i9-11900K has a single-core boost clock speed that is 250-300MHz higher than the i7-11700K. This performance gap is in-line with current expectations based on leaked Rocket Lake CPU specifications.

While Intel's single-threaded benchmarks are impressive, it is worth noting that AMD's Ryzen 7 5800X processor is listed with an overall CPU score of 28,681 on PassMark, giving AMD's Ryzen 5000 series CPUs a performance advantage in multi-threaded workloads. If nothing else, this shows that AMD and Intel different strengths and weaknesses, and that Intel's Rocket Lake processors will not necessarily be better than AMD's equivalent 8-core in all workloads.

Even if Intel's Rocket Lake series of processors can deliver higher levels of single-threaded performance in some workloads, it is hard to deny that this alone will not give Intel a clear cut victory over AMD. Intel's Rocket Lake results are not ahead of AMD by a huge margin, and AMD can offer PC builders up to two times as many cores on their mainstream AM4 socket. Beyond that, there will be workloads that will prefer AMD's Zen 3 core architecture, which means that Intel's single-threaded leadership in PassMark may not result in leadership performance elsewhere.

With Rocket Lake, Intel's single-threaded performance leadership is slim in Passmark. That said, Intel plans to release a Rocket Lake successor in the second half of 2021, promising buyers another new CPU architecture, which could extent Intel's performance lead further. That said, AMD is currently working on Zen 4, which means that AMD will soon have its own opportunity to leapfrog Intel once again.

It's an exciting time for the CPU market, with both Intel and AMD delivering major generational improvements in single-threaded performance. These improvements will allow for games to run at higher framerates, programs to feel more responsive, and rendering/compilation tasks to take up less of our valuable time. All of these things are good for consumers, assuming that product supply and CPU pricing can be kept in check. 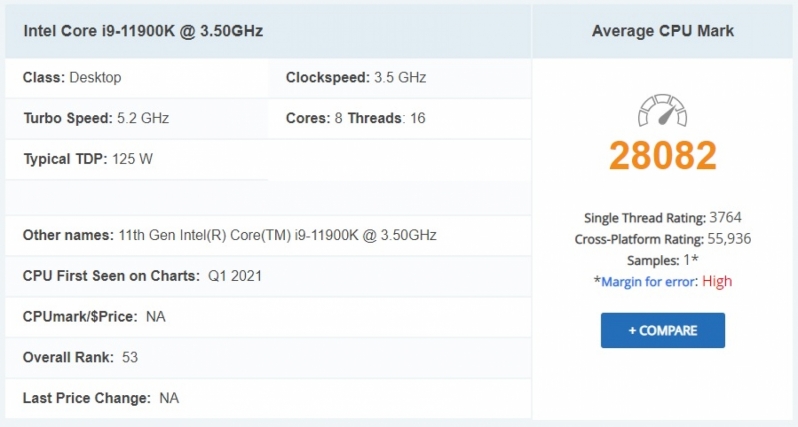 You can join the discussion on Intel's strong single-threaded Passmark benchmarks on the OC3D Forums.

best thing AMD can do is to have a futureproof socket for ZEN4.
same as with AM4. make it so that the next 3 CPU generations will run on AM5 (or whatever).

i knew i was milked for 3-5% more performance every generation.


they have to create something truly outstanding to make me forget that and switch back to intel.Quote

Tom Sunday
Many friends are having issues with 'memory compatibility' on most all of their newly acquired AMD systems. It was noted with some regret by having taken a AMD jump, that Intel in retrospect has always afforded a more mature CPU architecture regardless with what RAM is being throw at it. With this I think that ultimately AMD will come around but still has a way to go.

I cannot afford to upgrade any time soon with my still unresolved WFH plight. Stimulus checks have to buy food. My kitchen table doubles as my new desk. Now HR communicated that all full-time WFH people will now be converted to a "Casual Employee" status. More tough times ahead.Quote

Dawelio
Quote:
Ah that's rough to hear dude, keep hanging in there, stay strong, even though it might seem hard to do. You'll get through this and be an even stronger individual on the other side, once this passes.Quote

ET3D
I'm looking forward to seeing comprehensive reviews of Rocket Lake, but honestly, the main thing that matters is market availability. In the current market, I doubt that Intel will feel a need to undercut AMD, although I do hope for consumers' sake that Rocket Lake will have good availability and a decent enough price to take a chunk off AMD, and so perhaps allow those who want an AMD CPU to get one.Quote
Reply