Intel's next-generation Xeon processors are codenamed "Sapphire Rapids", a multi-die CPU design that appears to utilise the company's Golden Cove core design and features up to 48 cores, 96-threads, PCIe 5.0 connectivity, and support for AVX-512 instructions. Thanks to a new Geekbench 5 leak for a 96-core dual-Xeon system, we can see that Intel has been able to deliver strong levels of single-threaded performance with their latest Xeons, and multi-threaded performance levels that's similar to the best that AMD currently offers, despite the fact that Intel's latest Xeons offer fewer cores.

The Geekbench 5 data shown below comes to us via @Benchleaks on Twitter. This data comes from a Linux powered system that uses two Xeon Platinum 8468 CPUs and had over 500GB of system memory. Each CPU has 105MB of L3 cache and 96MB (1MB per core) of L2 cache per CPU, and this specific model of Intel's Xeon Platinum 8468 has a TDP of 330W.

This system from Intel, which achieved a single-threaded CPU score of 1253 and a multi-core score of 74853, had delivered performance numbers that surpass a dual-EPYC 7763 system in single-threaded performance and delivers multi-threaded performance that is on par with an AMD dual-EPYC system. Intel has achieved this with fewer CPU cores, a factor that makes Intel's CPUs more desirable in certain workloads. That said, AMD's Zen 4 EPYC Genoa processors are on the horizon, and that factor alone undermines Intel's win here. 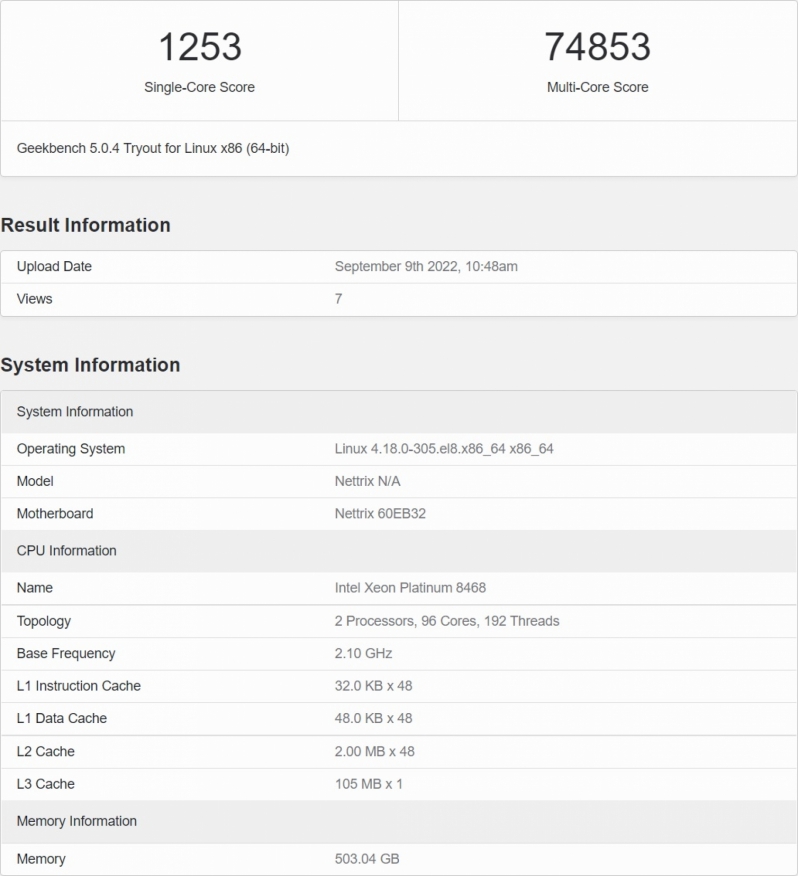 With Zen 4 EPYC processors releasing this year, AMD appears to have secured for themselves a strong position within the server CPU market. Genoa will offer users up to 96 cores per socket and higher levels of single-threaded performance. Intel will need to release CPUs with higher core counts to counter Genoa, and Intel does not appear to have plans to release higher core count Xeon processors anytime soon.

You can join the discussion on Intel's "Sapphire Rapids" Xeon countering AMD Milan despite its lower core count on the OC3D Forums.