It looks like Intel has new HEDT products on the horizon

It has been a while since Intel has launched a new High-end Desktop (HEDT) CPU. AMD's Ryzen 3000 series Threadripper CPUs arrived and stole a market where Intel has long been a dominant force. Skylake-X, and Cascade Lake-X were not capable of taking on AMD's Threadripper series in core heavy workloads, maxing out at 18 cores when AMD's newest models could offer users up to 64 cores. Since then, Intel has all but disappeared from the HEDT CPU market, but things may change soon.

A new Xeon workstation processor called the Xeon W5-3433 has been spotted on the SiSoftware Sandra database, a 16-core 32-thread processor that features 32MB of total L2 cache and 45MB of L3 cache. This CPU only features Intel's P-cores (Performance Cores), and the 2MB of L2 cache on each core suggests that this new processor is based on Intel's Sapphire Rapids silicon.

The CPU shown below has a 2 GHz frequency, which is not necessarily indicative of anything. Engineering samples often have low clock speeds, especially early samples. What's worth taking away here is that Intel has a 16-core all-P-core CPU, and it could be Intel's answer to Threadripper. 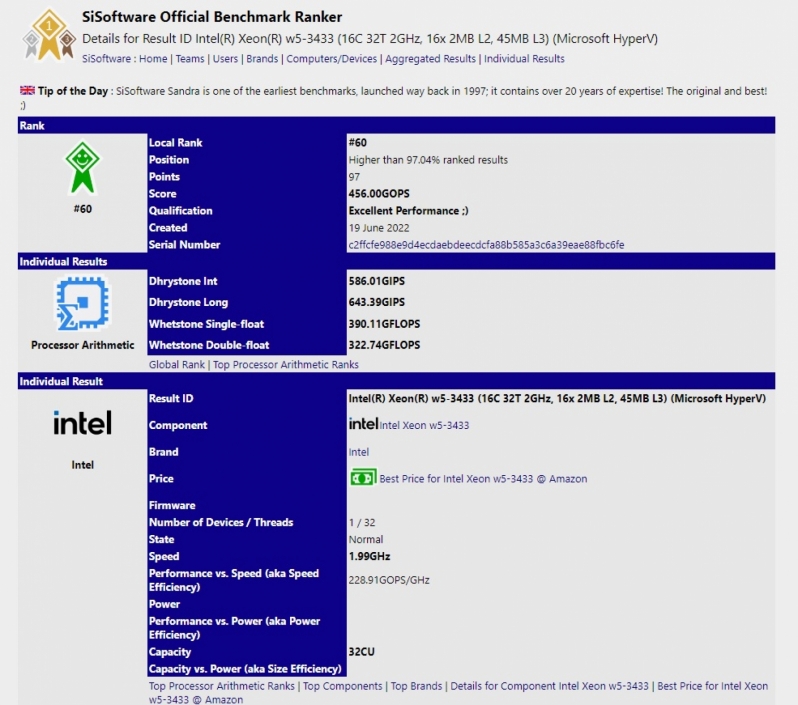 Intel's Xeon W5-3433 processor is part of Intel's FishHawk Falls family of processors, an HEDT offering that will allegedly launch with Intel's W790 motherboard chipset. As an all-P-core series of processors, these CPUs will feature support for AVX-512 and a wide range of other extensions, many of which are not available with Intel's hybrid x86 Alder Lake series processors.

Since FishHawk Falls is said to be based on Intel's Sapphire Rapids processors, CPU core counts of up to 56 should be possible. That said, Intel may not push their HEDT platform to core counts as high as this.

Intel is expected to reveal a new HEDT platform sometime this year, though it remains to be seen whether or no Sapphire Rapids is ready to hit the mainstream CPU market. Like much of Intel's Xeon roadmap, their new HEDT platform may be facing delays.

You can join the discussion on Intel's HEDT plans and their Xeon W5-3433 processor on the OC3D Forums.

smilertoo
This could be good if they can get it to 4ghz.Quote
Reply