The US retailer Newegg has started selling Intel's new i9-12900KS processor, a "Special Edition" Intel processor that can boost its P-Cores up to 5.5GHz out of the box. This boost clock speed is 300MHz higher than a standard i9-12900K

The "Special Edition" labelling of this processor, and its premium pricing over Intel's standard i9-12900K suggests that Intel's newest i9 will be available in limited quantities. In essence, the i9-12900KS is a highly binned i9-12900K with higher core clock speeds. Owners will be paying to an out of the box overclock, and paying a $200 premium for it.

Below is how the specifications of Intel's i9-12900KS compares to the i9-12900K. As you can see, all clock speeds on the i9-12900KS are higher, but only be a few hundred MHz. In reality, these clock speed differences will have a relatively small impact. 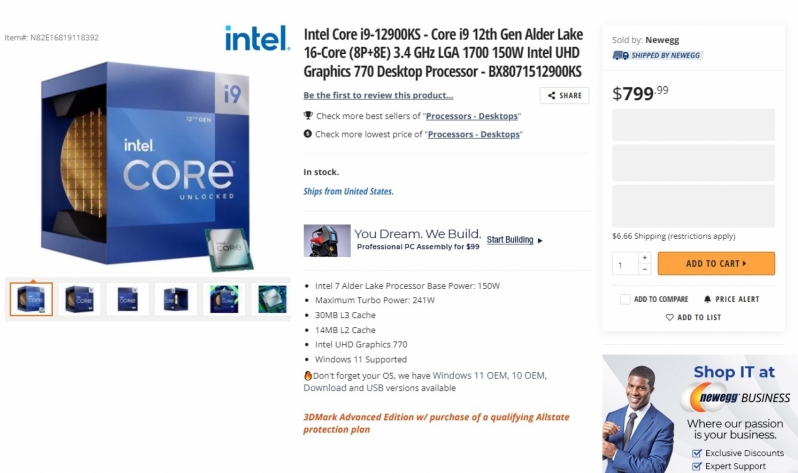 You can join the discussion on Intel's i9-12900KS processor appearing in the US for $799 on the OC3D Forums.

KingNosser
Clock vs clock isnt the best comparison tbh IPC is far more important but intel would market it differently when it suits them.Quote

Deadtroopers
The table entries are the wrong road round. You are showing the opposite of the Intel claim.Quote
Reply