Intel is profitable, but they are in decline

Intel's share price has dropped by as much as 10% after hours as a result of the company's poor Q4 earnings forecast and further delays to the company's planned 10nm server processors.

When compared to last year, Intel's data center business saw a decline of 10% in Q3 2020, with falling prices and smaller profit margins weakening the company's profits.

In Q4, Intel's sales are expected to decline, and the company's Gross margin is due to drop below 60% for the first time in over seven years. Both of these factors will hit Intel's profits hard, leaving financial analysts concerned about the company.

According to Intel's Q3 earnings report, the "platform average selling prices" of Data Center chips dropped by 15% when compared to Q3 2019, with Notebook chips saw a smaller drop of 7%. Competition from AMD within both of these markets is undoubtedly a factor which contributed to these price reductions, though we will know more once AMD reports their Q3 earnings later this month.

Intel's Ice Lake server chips have also been pushed back into 2021, with volume shipments being expected in Q1. Intel is still ramping its 10nm production volumes. Intel's continued 10nm product delays are hampering the company's competitiveness within the server market and has actively damaged the company's reputation amongst its hardware partners. These delays are allowing rival chipmakers like AMD to gain market share within a market which Intel previously dominated. 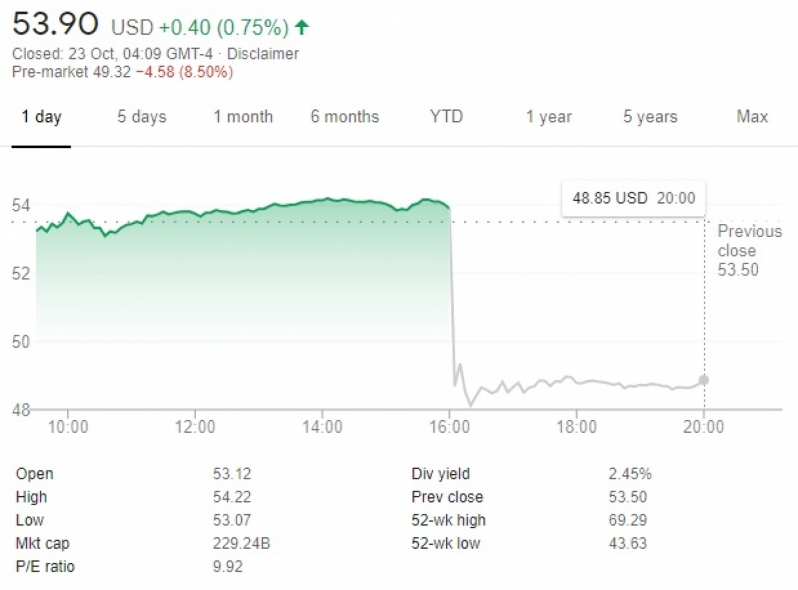 You can join the discussion on Intel's falling share price on the OC3D Forums.

dazbobaby
Quote:
Why? Will plot night fires tip intel CPU's over the edge?