Intel has confirmed that they have taped in their 7nm Meteor Lake Compute Tile, confirming that their IP is now ready for production and integration into a full SOC. In other words, Intel's Meteor Lake processors are on track.

Tape-in is a rare term within the industry, but it is due to become more common as SOCs become more and more divided into chiplets and tiles. Companies no longer tape out a single chip; they need to create multiple chips and then ensure that each of these pieces of silicon and work together as a cohesive whole. In a manner of speaking, a tape-in can be considered a tape out of an individual SOC chiplet or tile.

Meteor Lake compute titles will be a part of Intel's future CPU SOCs, which will be packaged together with Intel's Foveros technology alongside other IP tiles.

Great way to start the week! We are taping in our 7nm Meteor Lake compute tile right now.

A well-deserved celebration by the team on this milestone. #IAmIntel #Innovation pic.twitter.com/oHYhFvo3iF

Modular Design - The Future of Intel

The era of large monolithic processors is over; the future is modular. Intel's future processors will not be created using a single lithography node, interconnect technology, or single monolithic silicon dies. Like AMD, Intel plans to split their processors into multiple silicon dies but take things to the next level using their 3D Fevoros technology. With Meteor Lake, Intel plans to create a processor with a 7nm compute tile. Other aspects of Meteor Lake will be created using smaller 10nm or 14nm tiles, allowing Intel to re-arrange its designs to better cater to the needs of its customers. Intel's modular design plans grant the company increased flexibility moving forward and allow Intel to create CPUs more cost-effectively.

Intel's 7nm technology is said to be "moving rapidly" towards maturity, utilising a "simplified process" and "increased EUV". Reaching 7nm will allow Intel to better compete with newer lithography nodes from TSMC and Samsung, with Intel's 7nm being comparable (allegedly) to TSMC's 5nm,

With a 2023 launch planned, Meteor Lake will likely arrive as Intel's 14th Generation of Core processors, which means that Intel fans will need to wait for a few hardware cycles before seeing Meteor Lake. Rocket Lake is Intel's 11th Generation processor series, and rumour has it that Alder Lake and Raptor Lake are set to release before Meteor Lake. Intel plans to utilise 3rd party foundries to create "a range of modular tiles" for client and data centre products starting in 2023. While Intel has not detailed how it will utilise the capacity of 3rd party foundries, the company believes that this move will give Intel additional flexibility and increased supply, giving the company a competitive advantage. 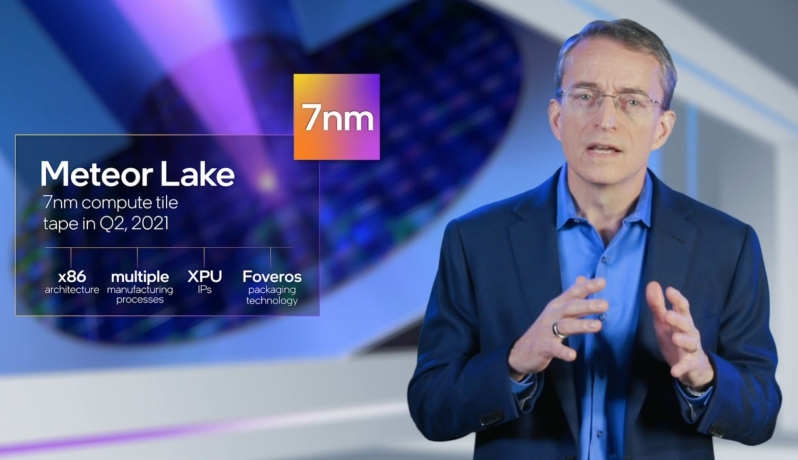 You can join the discussion on Intel taping in their 7nm Meteor Lake Compute Tile on the OC3D Forums.

WYP
Quote:
Notice how Intel is calling their modules "tiles" to differentiate themselves.Quote

I hope the media remember as well as we do about their "glue" comments.Quote

looz
Quote:
Does it apply to their GPUs?


I guess that's one way to implement tile-based rendering.Quote
Reply