At CES 2020, Intel has expanded its 10th Generation Comet Lake CPU lineup with new 45W H-series processors, offering users up to eight cores and 16 threads and clock speeds that can reach 5+ GHz.

With this reveal, Intel wants to make one thing clear; that they are the performance leader in the mobile processor market. This is a pre-emptive strike on AMD's Ryzen 4000 Mobile processors, which are due to be announced today at AMD's CES 2020 Press Conference (watch it here).

This hardware reveal also confirms that we won't be seeing higher-TDP H-series versions of Intel's Ice Lake series processors. Unfortunately, this leaves Intel's high-end mobile offerings on 14nm, and on a new variant of Intel's Skylake/Kaby Lake/Coffee Lake core design. This prevents Intel taking advantage of its latest architectural features, such as AVX-512, DL-Boost and the company's Gen 11 or Xe series graphics tech.

Intel claims that their new 10th Generation H-Series of mobile processors will release "soon", and that we should not expect to hear more about the series at CES 2020. This all but confirms that Intel's announcement is designed to undermine AMD's Ryzen 4th Gen Mobile reveal, and nothing more.

5GHz is an impressive feat on any modern processor, but Intel's ability to achieve this on mobile platforms is nothing short of astounding. Even so, we will need to see Comet Lake H-series notebooks in action before we are sure of Intel's 5GHz claims. It remains unknown how long these CPUs will run at, or over, 5GHz, and how much cooling and power these CPUs require to reach these speeds in reality.

With Comet Lake-H, Intel plans to deliver WiFi 6, Thunderbolt 3 and Optane memory support to a wide range of notebooks across i5, i7 and i9 models. However, support for these features is likely to come at the whim of notebook manufacturers, which means that it's possible that not all Comet Lake laptops will support these features. 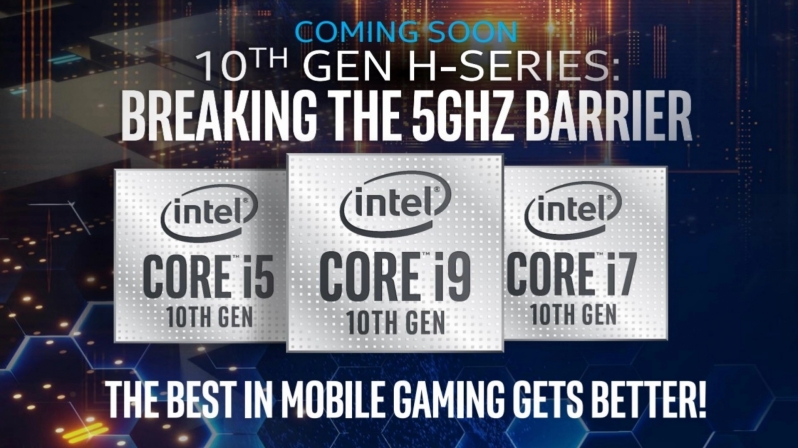 You can join the discussion on Intel's 5GHz Comet Lake notebook CPU teaser on the OC3D Forums.

NeverBackDown
Meh. After 60 seconds it'll just throttle down to the normal range of any other mobile CPUQuote

Dark NighT
Quote:
Yeah, this is just more marketing hype, it won't last and probably be only on one core.Quote

RobM
It will be ln2 cooled lolQuote