Does Intel have a new flagship CPU?

Intel has started to tease a new 12th Generation processor, a CPU that's faster than their i9-12900K. If Intel's latest Tweets are to be believed, they have a processor that can boost to 5.5 GHz, with an all-P-Core boost of 5.2 GHz.

Rumour has it that Intel plans to launch an i9-12900KS processor at CES, with early reports claiming that the CPU features an all-P-Core clock speed of 5.2 GHz, matching this new Intel model. This leaves us to suspect that Intel is teasing their i9-12900KS.

With a P-Core max boost speed of 5.5 GHz, an all-P-Core Boost Speed of 5.2 GHz and an E-Core boost speed of 4.0 GHz, Intel's suspected i9-12900KS should offer its users a notable boost in both single-threaded and multithreaded performance over today's i9-12900K. That said, without architectural changes compared to existing i9-12900K CPUs, these performance gains are limited.

Below is what Intel had to say about their teased 12th Gen processor.

12th Gen Intel Core desktop processors are topping Best CPU lists and widely available to gamers and enthusiasts. And we're not done yet. Next stop: Up to 5.5GHz. 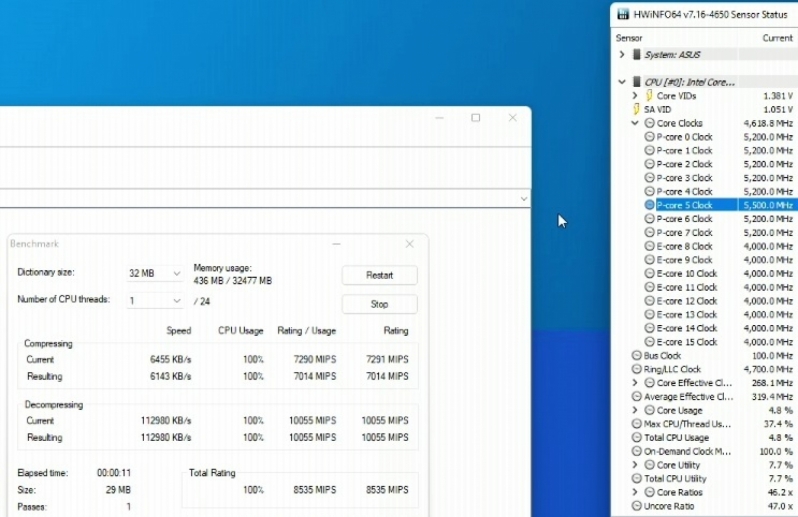 If I bought an i9-12900K processor, I would feel cheated by Intel. If this is the i9-12900KS, Intel will have replaced its flagship desktop processor two months after its launch. i9-12900K owners bought Intel's best, and soon that may not be the case.

We suspect that Intel's i9-12900KS processor will be available in limited quantities and with a significant price premium. Intel has created this CPU to make headlines and to build a CPU that can edge past AMD in a few more benchmarks. If this CPU was readily manufacturable, it would be the i9-12900K, not a special edition post-launch SKU.

You can join the discussion on Intel's i9-12900KS teaser on the OC3D Forums.