Intel's upcoming i9-11900K and i9-11900KF will offer PC builders a new performance-enhancing feature, an add-on that will realise the dream of 5+ GHz all-core clock speeds on motherboards with powerful power delivery systems and cooling solutions. This innovation is Intel's Adaptive Boost Technology, and it will deliver 5+ GHz all-core performance while running Intel's CPUs "within spec".

On Reddit, Intel has confirmed that they have been working with their motherboard partners on this feature, which will be available to i9 processor users through "motherboard software updates". This means that not all Intel motherboards will feature Intel's Adaptive Boost technology at launch. Industry sources have informed us that Rocket Lake's launch had been delayed to late March give motherboard manufacturers more time to get this feature working on their 500-series motherboard designs.

This is what makes Intel's 11th Generation i9 processors special

With their 11th Generation of Rocket Lake desktop processors, Intel's i7 and i7 models will all feature eight CPU cores and sixteen threads. Before today, the only (confirmed) major difference between Intel's i7 and i9 models is that the i9 will feature higher stock clock speeds and support the company's thermal Velocity Boost technology. Now we know that i9 CPUs will support Intel's Adaptive Boost Technology, giving i9 K and KF series models 5+ GHz performance to users of high-end motherboards and cooling solutions without overclocking.

We expect Intel's i9 11-series K and KF processors to be heavily binned and cherry-picked to deliver these high performance levels based on this knowledge. As such, it is possible that Intel's i9 k and KF series CPUs could face shortages depending on how many CPUs can meet Intel's Adaptive Boost performance targets. With Adaptive Boost, Intel wants to deliver bleeding-edge performance with their 11th Gen i9 K and KF series CPUs. That's why their i9 will cost more than their i7. 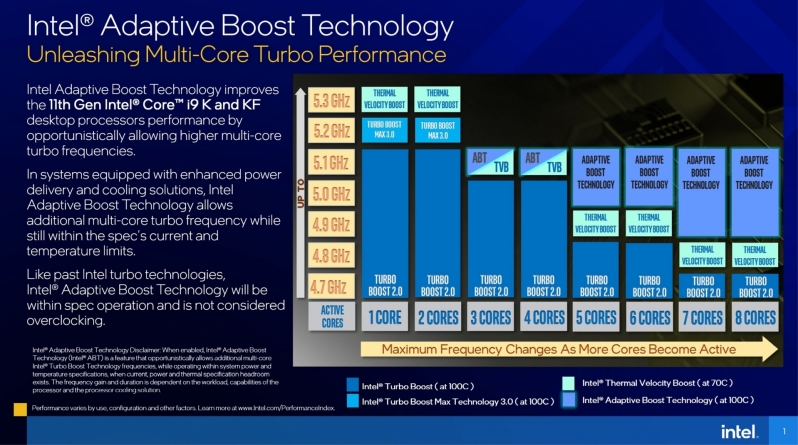 Is this technology anything new?

For years, Intel motherboard manufacturers have offered enhancements to Intel's boost technologies through BIOS modifications, allowing boost clocks to be sustained for longer and for higher boost clock speeds to be possible on all cores. In a manner of speaking, aspects of Intel's Adaptive Boost Technology isn't new, though Intel's implementation has one factor in its favour; it isn't considered overclocking.

Intel CPUs using Adaptive Boost will be running "within spec", offering users more performance without risking their processors with overly high voltages, thermals or current draw. In a way, this is just like AMD's Precision Boost technology, though Intel's Adaptive Boost appears to be more aggressive.

Adaptive Boost is a new i9 K-series feature that will enable the highest all-core clock speeds of Intel's entire CPU lineup, and it will be a must for the Intel users that desire maximum performance.

You can join the discussion on Intel's latest i9 CPUs being pushed to their limits by Intel's Adaptive Boost Technology on the OC3D Forums.