Intel hopes to challenge, and surpass, AMD's Ryzen 7 3700U

With their Ice Lake series of mobile processors, Intel promises to deliver their new "Sunny Cove" core architecture alongside their "Gen 11" series of integrated graphics, hoping to challenge AMD for the integrated gaming crown.

For starters, Intel's Gen 11 graphics are said to offer up to a 2x performance boost over the company's Gen 9 offerings, with the chart below (from Engadget) showcasing performance gains of between 42% and 108%. This is an incredible performance leap for Intel, showcasing their desire to find success within the graphics market moving forward.

It is worth noting that these performance gains are achieved thanks to Intel's latest 11th gen graphics architecture, though 10nm also plays a role here thanks to the node's improved power consumption characteristics. 10nm should enable Intel to get a lot more performance out of their 15W mobile TDPs.

Intel provided Engadget with the charts below but failed to provide any framerate data for each gaming title. This means that we don't know how well these games perform using Intel's latest integrated graphics solution, just that they perform better on Intel's 11th Gen mobile graphics. 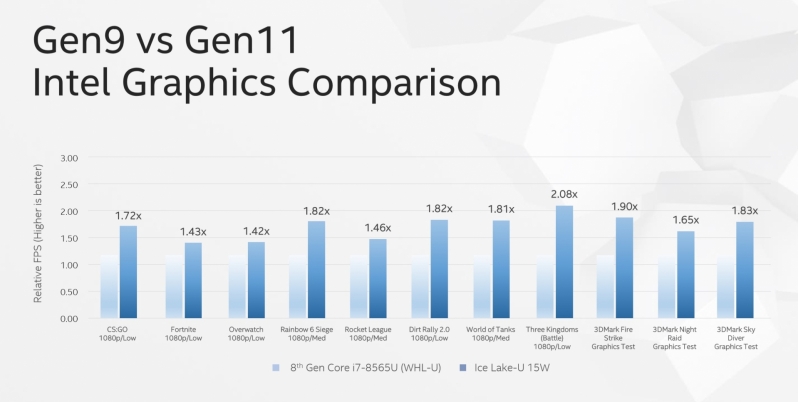 With Ice Lake, Intel plans to challenge AMD for the mobile performance crown, with their Ice Lake-U series processor challenging AMD's Ryzen 7 3700U in the 25W TDP category, offering similar performance levels in the list of games shown below.

This result is impressive for Intel, though it is worth noting that AMD's Ryzen 7 3700U was built using Globalfoundries' 12nm process, while Intel's Ice Lake-U processor is built using their leading-edge 10nm node, which is designed to compete with TSMC's 7nm process node. If AMD can release 7nm Ryzen APUs in early 2020, AMD could easily bring their APUs to an entirely new level of integrated graphics performance, surpassing Intel once again. 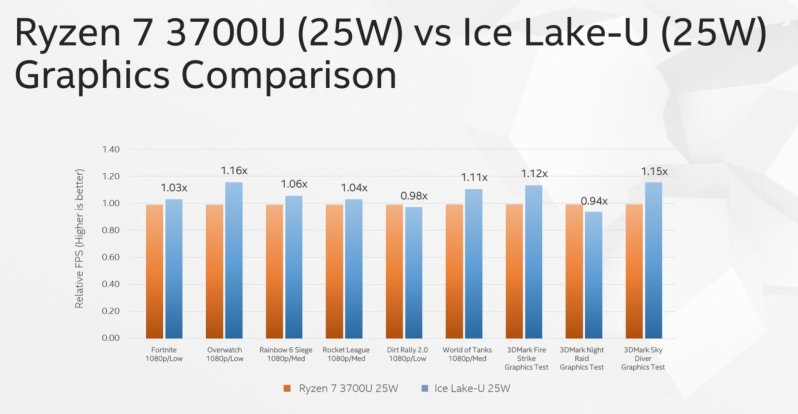 Intel plans to provide more details on their upcoming Ice Lake architecture and their other future products during their Computex 2019 keynote, which takes place on Tuesday, May 28th.

You can join the discussion on Intel challenging AMD's iGPU performance with their mobile Ice Lake processors on the OC3D Forums.

NeverBackDown
Not if you disable hyper threading

The links bring up just the article image btwQuote

grec
I guess AMD could also possibly have gone for 7nm+ Zen2 APUs. Doesn't seem to have much if anything in terms of raw performance benefits but the efficiency gains might be worthwhile given the APUs biggest markets are laptops by a large margin, and 7nm+ will be in shipping mobile SoCs in the 2nd half of this year with volume production starting quite recently so would line up reasonably for a 1st half 2020 launch product if they felt that node was worthwhile.Quote
Reply