Is Rocket Lake better at gaming than Comet Lake? Early benchmarks are in!

Will 11th Gen Rocket up your gaming performance?

Is Rocket Lake better at gaming than Comet Lake? Early benchmarks are in!

Thanks to the German retailer MindFactory, Intel's i7-11700K processor has been released to consumers before the processor's official reveal, allowing the processor to be tested by the enthusiasts that are willing to pay for it.

The creator of CapFrameX, one of the best PC game benchmarking applications, has managed to get a hold of one of these pre-launch i7-11700K processors and has compared it to Intel's i9-10900K in gaming applications. These tests give us an early look at Rocket Lake's gaming performance and how Intel's new Cypress Cove architecture benefits gamers.

Intel promised users a double-digit IPC uplift over their Comet Lake architecture, granting them more single-threaded CPU performance than their last-generation counterparts. Looking at CapFrameX's data, Intel's Rocket Lake CPUs provide gamers with a modest performance boost, though it is worth remembering that only three games have been tested.

CapFrameX tested Intel's i7-11700K using "relatively new BIOS" and faster memory than Intel's i9-10900K. Intel's Rocket Lake CPUs officially support 3200MHz DDR4 memory, giving them a memory performance advantage in it's "stock" state. Right now, it is unclear how much of Rocket Lake's gaming boost can be attributed to memory performance. However, it is worth remembering that the move from 2933MHz to 3200MHz only represents a 9.1% memory clock speed boost. 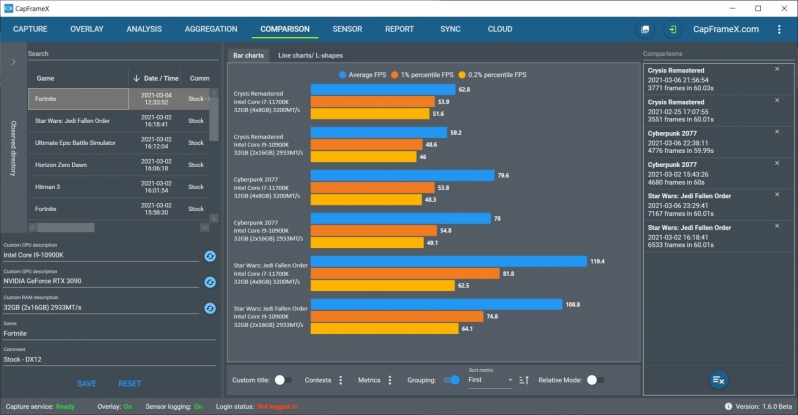 Is Rocket Lake worth it for gamers?

Ultimately, we will need to wait for further testing. Still, if CapFrameX's results are indicative of a wider performance trend, it looks like Intel's 11th Generation Rocket Lake CPUs will only deliver gamers a modest framerate uplift over Intel's 10th generation Comet Lake processors.

You can join the discussion on the gaming performance of Intel's Rocket Lake architecture on the OC3D Forums.

Today I want to share with you some Rocket Lake results. Because I bought the 11700K from Mindfactory this is no problem.

In the last days and weeks many leaks and even reviews have been showed on the internet.

These benchmarks were made with a relatively new BIOS. (1/2) pic.twitter.com/3pfrUvFMx2

Dawelio
As many have pointed out already, which I'm in the same boat, all of this doesn't matter if the CPU is an actual stove which you can cook your eggs on.Quote

Bagpuss
Quote:
Gaming will never stress the CPU enough to hit the sort of temps that have been reported.


...but in gaming? Nope. I've never seen it go above 70c in even the most demanding of gaming scenarios and in general spends the vast majority of its time in the 40-60c range.Quote
Reply