On August 29th, AMD will be hosting a live event called "together we advance_PCs", where the company plans to premiere their next-generation Ryzen series desktop processors. This event will have AMD's Chair and CEO Lisa Su and CTO Mark Papermaster presenting, alongside other key executives.

At this live event, AMD will be detailing their new "Zen 4" core architecture and will showcase their latest Ryzen series processors alongside their new AM5 motherboard platform. AMD will also be highlighting the advantages of DDR5 memory and PCIe 5.0 connectivity, both of which will be features as part the company's new AM5/Ryzen 7000 platform.

AMD has promised that their latest processors will "drive a new era of performance desktop PCs", signalling that AMD fans should prepare to be impressed. AMD's stream will start at 7 pm ET on August 29th, translating to midnight UK time.

Below is what AMD has to say about their Zen 4/Ryzen 7000 series reveal event.

Today, AMD (NASDAQ: AMD) announced “together we advance_PCs,” a livestream premiere to unveil next generation AMD PC products. Chair and CEO Dr. Lisa Su, CTO and EVP Mark Papermaster, and other AMD executives will present details on the latest "Zen 4" architecture that powers upcoming AMD Ryzen™ processors and the all new AM5 platform built around the latest technologies including DDR5 and PCIe5, all designed to drive a new era of performance desktop PCs.

The show will premiere at 7 p.m. ET on Monday, August 29, on the AMD YouTube channel. A replay can be accessed a few hours after the conclusion of the event at AMD.com/Ryzen. 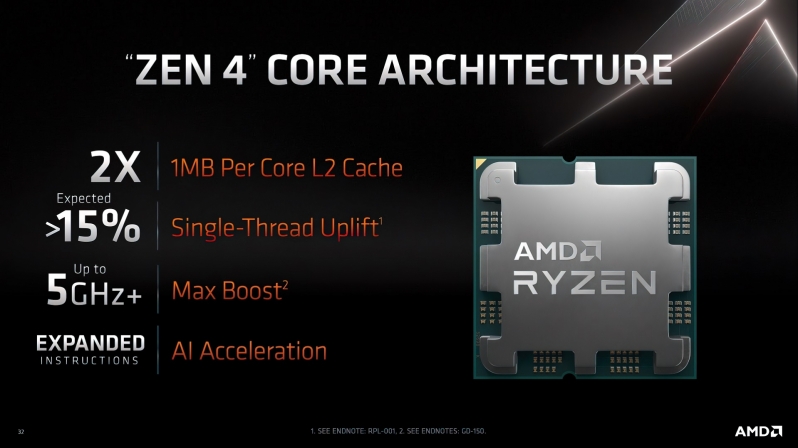 What to expect from Zen 4

Larger L2 caches on AMD's Zen 4 processors should help to boost Zen 4's performance in specific workloads, taking load of the processor's L3 cache. This will improve memory management for Zen 4, though the real-world performance impact of this change remains unknown. AMD has also enhanced Zen 4 with support for new instruction sets, which includes AVX-512. This will boost AMD's CPU performance in many workloads that were previously considered the exclusive domain of Intel. This change will hit one of Intel's strong points hard, and that is great news for team Ryzen.

We expect AMD to discuss Zen 4 in more detail later this month, and give us real-world performance data for their Ryzen 7000 series processors. Expect us to discuss these announcements when they are made.

You can join the discussion on AMD's Ryzen 7000 series CPU reveal on the OC3D Forums.