Over the past few days, multiple AMD Ryzen CPU roadmaps have appeared online through various sources, revealing AMD's plans for Zen 4 in the desktop and mobile markets.

The roadmap below, from @Olrak29_, details AMD's plans for Ryzen until the launch of the Ryzen 7000 series, highlighting details about the company's planned Zen 3+ Ryzen 6000 series and the company Zen 4 based Ryzen 7000 series. As always, please take the data within these roadmaps with a grain of salt.

Starting with the Ryzen 7000 series, all AMD Ryzen processors should contain integrated graphics, a factor that has long been considered as an advantage for Intel's desktop CPU lineup. Compared to AMD's Ryzen 5000 series CPUs, Raphael should offer hardware enthusiasts performance improvements in all areas, thanks to the CPU's use of improved Zen 4 CPU cores, modern 5nm lithography, DDR5 memory and high-speed PCIe 5.0 connectivity. 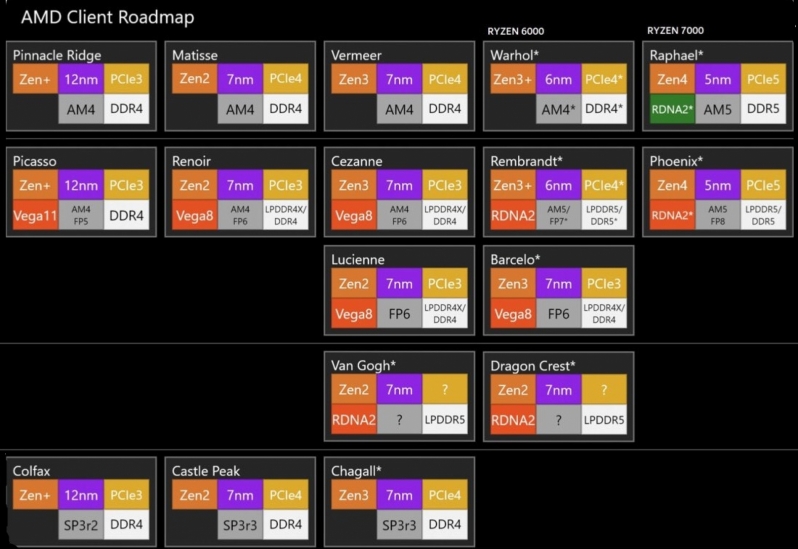 By adding integrated graphics solutions to their entire Zen desktop lineup, AMD would be able to embed its processors into a larger number of pre-built/OEM systems, allowing AMD to expand its market share within this market. This is an area of the PC market where Intel has long been dominant, making this push a big deal for the PC market as a whole.

You can join the discussion on AMD's leaked Ryzen CPU/APU roadmap on the OC3D Forums.

Dicehunter
I'm guessing then as Zen 3+ is AM4 it will not need a new chipset and X570 boards will be a thing for a little while yet, I'm curious if it will be similar to the 3000 series refresh "XT" lineup, A little boost but not worth it for existing 5000 series owners.Quote

WYP
Quote:
Based on previous rumours, Zen 3+ will be a slightly better upgrade than Zen to Zen+. So a small percentage IPC boost and possible clock speed bump.Quote

Dicehunter
Quote:
Best get some cash ready to get the 6800X, Retire this rusty old tired 5800X

AngryGoldfish
AMD is one by one removing the failings or shortcomings of Zen. Right now, if my GTX 1080 breaks, I'll have no iGPU to continue using the system, and I'll have no GPU to replace it as there are none to buy. This is definitely a negative for being AMD, especially at the moment.Quote
Reply