Thanks to an information leak from @KOMACHI_ENSAKA, we now know the planned core counts of Intel's i9-class 13th Generation Raptor Lake processor. This information comes via a BAPCO's Crossmark benchmark, with Tom's Hardware screenshotting the data before it was taken down.

With Raptor Lake, Intel's reportedly working to address some quirks with Alder Lake's P-Cores (Performance Cores), with the primary ones being power draw and their inability to utilise AVX-512 instructions when E-cores are enabled. Technologies like DLVR should help tackle power draw, and other fixes should enable AVX-512 instructions when E-cores are active. Beyond that, Raptor Lake reportedly features an improved cache structure, an enhancement which will be a big deal for PC gamers.

The main information to take away from Intel's leaked Raptor Lake CPU benchmark is that their next-generation desktop processor features 24 cores and 32 threads. This suggests that eight cores feature hyper-threading and sixteen cores do not. This means that Raptor Lake should feature eight P-Cores and sixteen E-Cores. 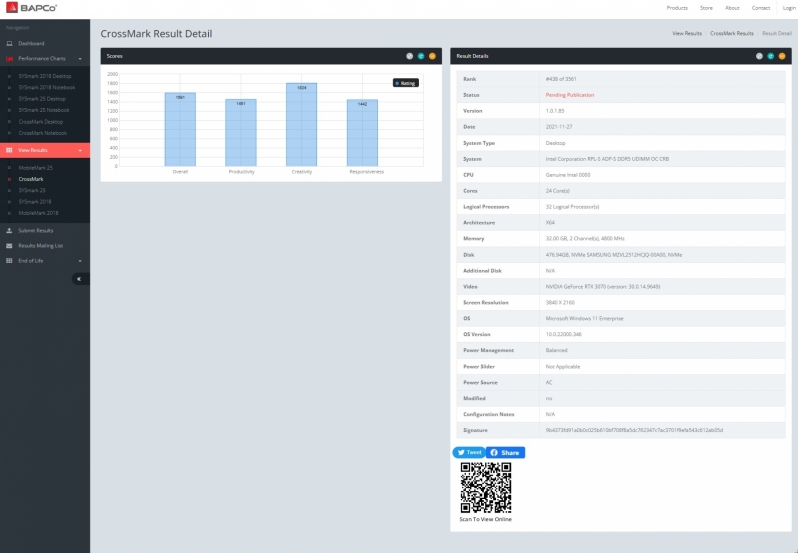 Unimpressive results, but this is just the beginning

Let's be clear here and say that these leaked Raptor Lake benchmarks are not impressive, but that is not the point. Early silicon often performs poorly and runs at limited clock speeds. Weak performance results are not surprising to see here.

Raptor Lake isn't due to launch until the end of 2022, and that gives Intel plenty of time to optimise Raptor Lake. If Raptor Lake contains the changes we expect, it will be a compelling processor for gamers and other users. That said, it remains to be seen what AMD's offering will be in late 2022, as that is when Zen 4 is expected to launch.

You can join the discussion on Intel's Raptor Lake leaks on the OC3D Forums.