Has Intel regained the single-core crown? Maybe not!

Intel's i9-11900K has appeared on the PassMark benchmarking database (thanks @TUM_APISAK) revealing an overall CPU score of 28,082 and a single-threaded CPU score of 3,764.

If this CPU score is legitimate, Intel has regained single-threaded performance leadership within PassMark, outperforming AMD's Ryzen 7 5800X, which has a single-threaded score of 3,511.  That said, this Intel result is based on a single processor, which means that this result could be inaccurate.

Intel's i7-11700K, a lower-performance 11th gen 8-core Rocket Lake processor, has already been listed with a single-threaded score of 3,548, signalling that the i9-11900K offers users a 6% single-threaded performance boost. Assuming that both processors have clock speeds that boost to around 5GHz, this score difference implies that the i9-11900K has a single-core boost clock speed that is 250-300MHz higher than the i7-11700K.

While Intel's single-threaded benchmarks are impressive, it is worth noting that AMD's Ryzen 7 5800X processor is listed with an overall CPU score of 28,681 on PassMark, giving AMD's Ryzen 5000 series CPUs a performance advantage in multi-threaded workloads. If nothing else, this shows that AMD and Intel different strengths and weaknesses, and that Intel's Rocket Lake processors will not necessarily be better than AMD's equivalent 8-core in all workloads.

Even if Intel's Rocket Lake series of processors can deliver higher levels of single-threaded performance in some workloads, it is hard to deny that this alone will not give Intel a clear cut victory over AMD. Intel's Rocket Lake results are not ahead of AMD by a huge margin, and AMD can offer PC builders up to two times as many cores on their mainstream AM4 socket. Beyond that, there will be workloads that will prefer AMD's Zen 3 core architecture, which means that Intel's single-threaded leadership in PassMark may not result in leadership performance elsewhere.

You can join the discussion on Intel's i9-11900K benchmarks leaks on the OC3D Forums. 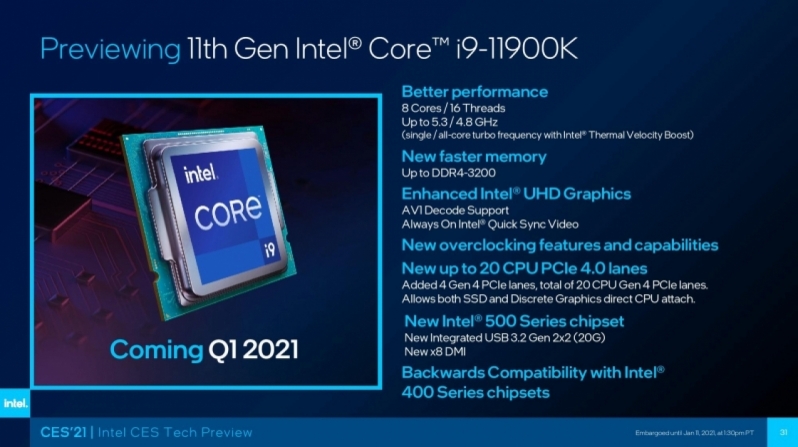 Kleptobot
It doesn't matter though because Intel doesn't care about benchmarksQuote