While Huawei was being dealt a killer blow from the United States, the company unveiled an ambitious product roadmap for their server systems, aligning with Intel's planned offerings to deliver systems with DDR5 support and PCIe 5.0 capabilities in 2021.

Thanks to the US government's actions, Intel is no longer in a position where they can work with Huawei, but that doesn't make Huawei's roadmap reveal any less interesting.

In 2021, Intel plans to release Sapphire Rapids, a new series of server processors which will offer users support for 8-channel DDR5 memory and PCIe 5.0 support on the company's  Eagle Stream platform, delivering a huge I/O leap over today's server systems.

DDR5 memory is designed to offer a 2x increase in bandwidth over DDR4 alongside higher capacities per DIMM, enabling servers with wider data access on a denser memory pool. Sapphire Rapids will also support 8-channel memory, with is a significant increase over the 6-channel memory support that today's Intel server chips offer.

PCIe 5.0 will offer a 4x increase in bandwidth over today's PCIe 3.0 lanes, enabling users to connect devices over a higher bandwidth link or connect devices to each other using fewer PCIe resources. With PCIe 5.0, the performance of today's M.2 NVMe SSDs could be offered on a single PCIe 5.0 lane, rather than four PCIe 3.0 lanes. PCIe bandwidth is most constrained in data centre applications, making it likely that PCIe 5.0 will be delivered to consumer systems at a later date.

If the server roadmap below is correct, Intel won't be moving away from their 14nm manufacturing process for quite some time, with Cooper Lake releasing on 14nm in 2020. Yes, 10nm processors will be available with Ice Lake, but it doesn't look like Ice Lake will mostly exist alongside Cooper Lake, rather than act as a full-on replacement.

In all, Intel's Barlow Pass platform appears to be a shortlived one, releasing in 2020 while receiving its replacement in 2021 in the form of Crow Pass/Eagle Stream. Intel's PCIe 4.0 server products will be shortlived, acting as a stop-gap solution until their PCIe 5.0 products are ready in 2021. 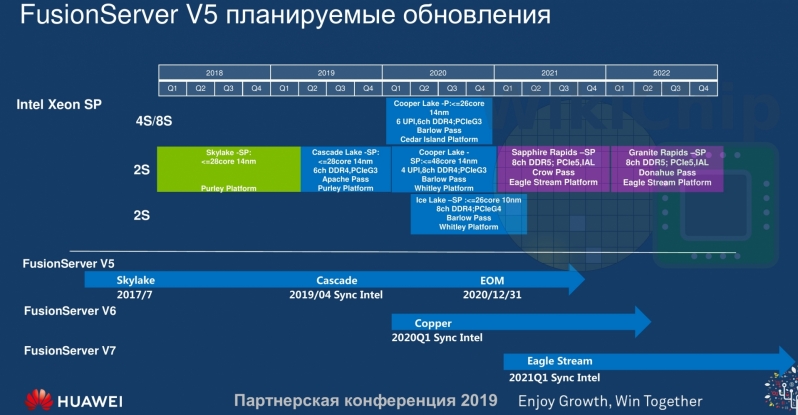 You can join the discussion on Intel's leaked server roadmap on the OC3D Forums.

grec
I know some in the industry who don't need cutting edge hardware are looking at skipping updating to PCIe4 since PCIe5's development occurred concurrently and seemed mostly unhindered by the issues that delayed PCIe4, so the gap between product availability is apparently going to be far shorter than with any past revision, and any investment in hardware to fully take advantage of PCIe4 wouldn't be nearly as cost effective as PCIe5 if you don't need to do wide hardware changes in that ~18 months(Probably over 24 for consumer hardware though I think).Quote

WYP
Quote:
That makes sense, skip PCIe 4.0 and update for PCIe 5.0 and DDR5 in one go.Quote

NeverBackDown
Quote:
I would expect to have NVMe drives not to long after tbh. A pcie5.0 drive running with 1 Lane would be equal to x4 3.0 drives right now. Wouldn't be crazy difficult to do.

Also helps with Thunderbolt technology. Which for VR or external GPU boxes would be immensely important.Quote

grec
Yeah the devices usually come before the motherboards/CPUs with PCIe, at least with enterprise parts. The first PCIe4 GPUs launched last November. The first PCIe5 GPUs are expected in 2021 (From Intel at least). It's the basis for their CXL spec, which had many people from their team that worked on the PCIe5 and USB4 specs(Including the built in "TB" functionality).Quote
Reply