AMD has big plans for its future CPU and graphics lineups, and in late 2021/early 2022, it looks like AMD's Zen 3 and RDNA 2 technologies will be coming together with their (codename) Rembrandt processors.

Today's Ryzen Mobile processors are based on the company's Renoir silicon, which offers users up to eight Zen 2 CPU cores and refined Vega graphics. Succeeding Renoir is Cezanne, which will bring with its Zen 3 cores, which should help increase Ryzen Mobile's single-threaded performance and performance per watt characteristics. With Rembrandt, it looks like AMD plans to deliver larger changes.

The roadmap below was compiled using various images by Videocardz. Note that Rembrandt is said to feature "CVML" support. CVML is expected to signify Computer Visions and Machine Learning, giving Rembrandt some AI computational power. It is also worth noting that Rembrandt could transition to 5nm, depending on the readiness of AMD's foundry partners.

With Rembrandt moving to DDR5 memory, it is likely that 2022 will see AMD move to a new CPU socket. This new socket is likely to be called AM5, delivering DDR5 memory support and other new features. 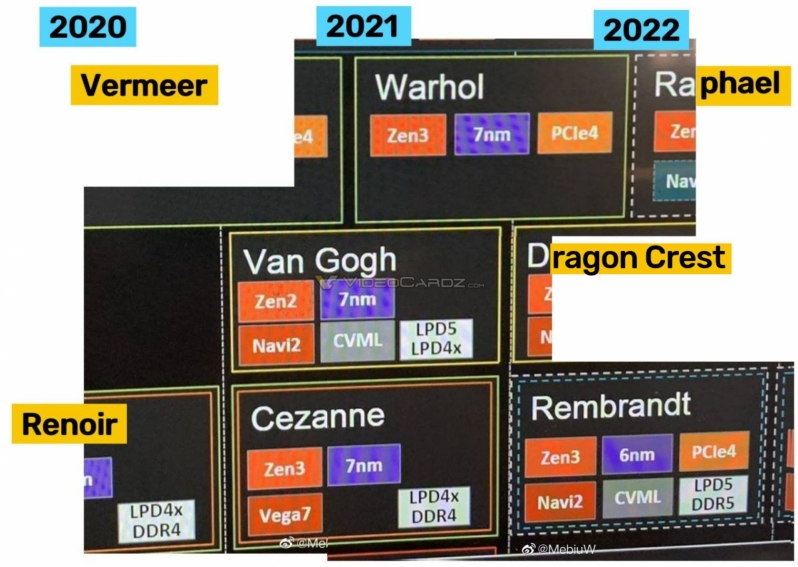 You can join the discussion on AMD's Zen 3/RDNA 2 Rembrandt processors on the OC3D Forums.

Warchild
Maybe my art fails me, but all these impressionist names, and then "Dragon Crest"??Quote

Kleptobot
Quote:
Dragon Crest the well known impressionist painter. One of the so called 'Dutch Masters'. Known for his delicate portrayal of light and composition to portray human emotion.Quote

Warchild
Quote:
ah interesting. Might have to google into it then.Quote
Reply