AMD's Threadripper series of CPUs started out as a skunkworks project. It started as a passion project from AMD's engineers, lacking a place in the company's roadmap until fairly recently. This unintentional product eventually turned into one of the highlights of AMD's Ryzen lineup, taking the fight to Intel with up to 16 cores and 32 threads at under $1000.  causing Intel to rethink the pricing of their incoming X299 series of products.

A new marketing slide, allegedly leaked from AMD, has confirmed that AMD plans to continue creating Threadripper series products, starting with Threadripper 2nd Generation later this year and a Zen 2 based "Castle Peak" offering in 2019, a product that plans to achieve "Dominant Leadership in the HEDT market".

Zen 2 is set to deliver some major design changes to AMD's Zen cores, which when combined with a move to a new 7nm process node should allow AMD to provide a huge generation to generation performance increase. This slide reeks of overconfidence from AMD, suggesting that the company has big plans for the HEDT market, with TR4 feature upgrades being planned for 2019. While these slides could be fake, much like any leak, we wouldn't put it past AMD to include a monster truck in their slides, after all, those tyres have massive threads. 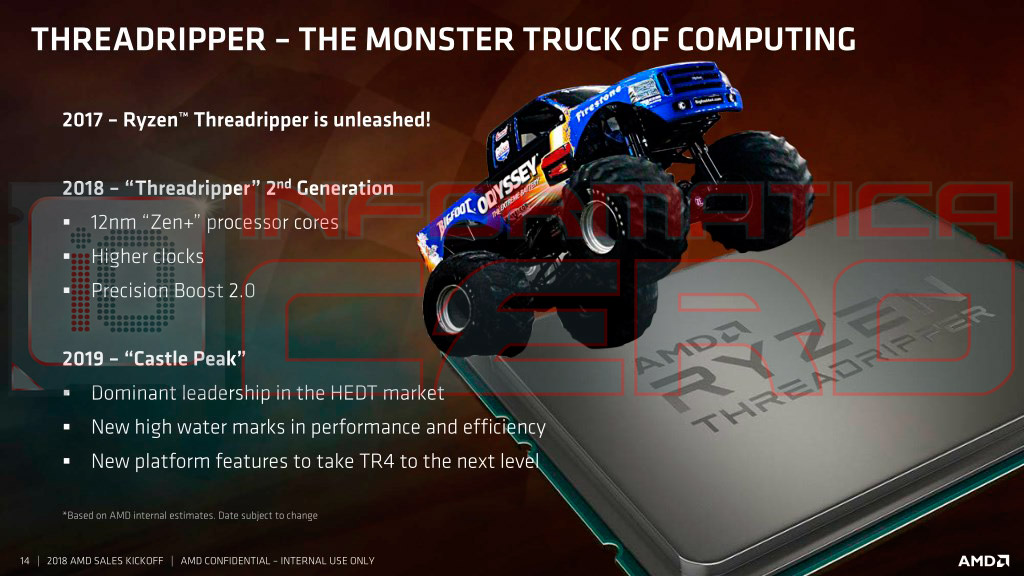 Threadripper 2nd Generation is set to take Threadripper down to 12nm and offers higher clock speeds and Precision Boost 2.0, lining up nicely with expectations for Ryzen 2nd Gen, leaving little to dispute on that front.

Early rumours have pointed towards future EPYC series processors featuring higher core/thread counts, which is something that AMD could pass on to Threadripper and Ryzen, though this depends on whether or not AMD wants to use to die space savings of 7nm to increase their CPU core count.

You can join the discussion on these AMD "Castle Peak" processor rumours on the OC3D Forums.

AlienALX
It really won't take very long for 6 core CPUs to seem a bit mean tbh. Quad cores are pretty much now relegated to office use and so on and are soon to be a thing of the past. Thing is, once core support does hit then 6 cores will seem pretty lame compared to 16.

Seems my gamble would have paid off this time. Makes a change !Quote

dario
Seems 2019 will be the year I retire my i7 2700k, finally! I hope the GPU market will sort itself out by then.Quote

AngryGoldfish
I'm excited to see what Intel has up their sleeve to counter this.Quote
Reply