This year, AMD plans to launch their Ryzen 7000 series of processors and their new AM5 CPU socket, starting a new era for the company and for their Ryzen brand. AMD's AM5 socket will move AMD away from PGA motherboards (pinned processors) to LGA (pinned motherboards), transition the company's processors to DDR5 memory, and ad support for new technologies like PCIe 5.0. New motherboards, new memory, new processors. AM5 gives AMD a fresh start.

Motherboard manufacturers are already working on new AM5 motherboard designs, and it looks like AMD plans to launch their Ryzen 7000 series alongside B-series and X-series motherboard options. These options will allegedly use AMD's B650 and X670 chipsets respectively. The good news for gamers is that this will allow AM5 motherboards to launch with a variety of price points.

An image has been circulation online, coming via the Twitter hardware leaker @9550pro, who has showcased what appears to be part of a BIOS/UEFI menu on an MSI MAG series motherboard with AMD's B650 chipset. This motherboard also appears to be running a Ryzen processor at 1.532 volts, which suggests that AMD's Ryzen 7000 series will scale to high voltages. 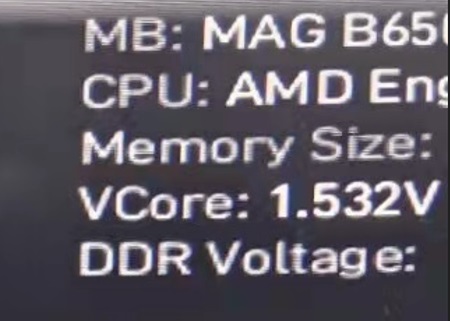 If you have seen a Ryzen processor in operation, you will have seen high voltage spikes before. These are normal, and expected. That said, 1.532V is a high voltage.

With their recently revealed N4X node (more info here), an HPC-focused version of their N4 node, TSMC confirmed that their new node would allow customers to aim for higher clock speeds and more effectively utilise higher voltages. This node is very useful for applications where processors are not focusing on ultra low power performance and aim to deliver higher performance levels. If AMD's using a node like this for Zen 4, we should expect great things from 5nm.

At CES, AMD has already showcased a Ryzen 7000 series processor where "All of those Zen 4 cores are running at 5 GHz" (more information here). With Zen 4, AMD is focusing on delivering high performance levels. With Zen 4 we should expect an architectural leap over Zen 3, and AMD has also showcased all-core clock speeds with Zen 4 that are much higher than what we have already seen with Zen 3. With both of these factors in mind, we should expect Zen 4 to be a huge upgrade.

You can join the discussion on MSI's alleged MAG B650 motherboard and AMD's alleged 1.5V AM5 processor on the OC3D Forums.

Dicehunter
Personally I'll likely be dropping a 13900K into my Z690 board and using my 12900K for my HTPC but it's pretty exciting seeing tech move forward at a good pace like this.Quote

meuvoy
Quote:
I'm just so worried about cleaning thermal paste from those small dents around this IHS...Quote