MIS has confirmed that all of their 500, 400, and 300 series motherboards will support all of AMD's recently revealed Ryzen 5000/4000 series processors, including AMD's Ryzen 7 5800X3D. BIOS support for all of MSI's AM4 motherboards will arrive by the end of April, with many models already supporting these processors.

Thanks to this commitment, users of older MSI AM4 motherboards will soon be able to utilise AMD's latest Ryzen series processors. This allows users of these boards to potentially upgrade from Ryzen 1000 series (Zen) CPUs to a new V-Cache enhanced Ryzen 5000 series (Zen 3) processor. Potentially, Ryzen users will be able to benefit from multiple generational leaps in system performance and efficiency.

Below, we have included MSI's press release which confirms their BIOS support for AMD's latest Ryzen CPUs on all of their AM4 series motherboards. 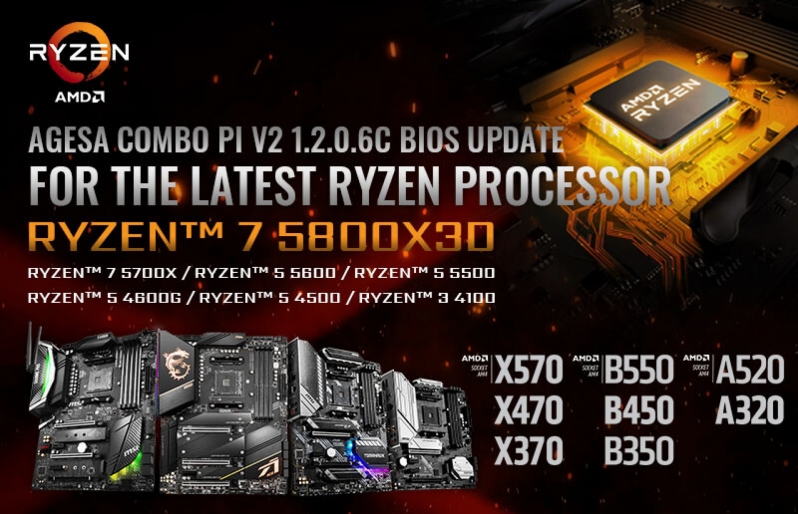 MSI is committed to deliver gamers and creators the best experiences. This is why BIOS update is always great for most users. The latest AMD AGESA COMBO PI V2 1.2.0.6c BIOS was released for some MSI 500- and 400-series motherboards. The purpose of AGESA 1.2.0.6c is not only for better compatibility but also for maximizing AMD Ryzen 7 5800X3D performance. For the older 300-series motherboards, we will release the AGESA COMBO PI V2 1.2.0.6c beta BIOS by the end of April. Please refer to the following chart for more information.

For our users, MSI will continue to update the latest news. Please follow MSI officials and check the product pages for BIOS updates.

You can join the discussion on MSI supporting AMD's latest Ryzen CPUs on their oldest AM4 motherboards on the OC3D Forums.

KingNosser
Looks like i'll be getting an upgrade then

KingNosser
Not 100% just yet, but most likely between 5700x 5800x or the 5800x3d, really depends on the difference between them and price and if the x3d is able on my x370 i'll know before i pick one up at least. My main reason for holding back on an upgrade generally is the mobo is tied to my windows install, so changing that would have meant tons of hours reinstalling.

So this solves that issue and will make my system last a while longer, my only main issue after upgrading is how to force windows to not install windows 11 i'd rather it not upgrade me just cause it can as atm i see no reason to get it.

So I'll be looking out for comparison benches on them 3 cpu's i know the x3d has no overclocking so unless it outperforms an oc'd 5700x or 5800x i'll mark it off the list.

After a little looking around if the 5800x is supported it's at not a bad price atm so i'd be able to get one around the time of the bios update, thou if i could get a 5700x for a similar price i feel i'd lean towards that as it has a lower TDP not sure the x3d is really something i'd need and it's bound to be a little higher in price.

Saying that good news for me, my 6800XT will finally be able to open the taps fully

g0ggles1994
Well colour me surprised. 5800X going to be a on the shopping list now

KingNosser
Quote:
Yep sure is good news, been waiting a long time hoping that AM4 would get full support across the board and it now seems that is happening. So my next upgrade after this one will be a long time off, tech moves to fast to keep up fully and so maybe when AM6 happens i'll be chomping at the bit to get an upgrade